Goma, a city of some 1.5 million people in the shadow of the volcano and on the shores of Lake Kivu, was on edge as violent aftershocks continued through the night and into Monday.

The eruption has left hundreds of people homeless.

INTERNATIONAL NEWS - Five people were found choked to death on toxic fumes from the eruption of eastern DR Congo's Nyiragongo volcano on Monday, as strong aftershocks rocked the city of Goma.

The deaths bring to 20 the number killed since Africa's most active volcano erupted on Saturday, spewing red-hot molten lava that engulfed homes in its wake.

"We have just discovered five dead people," civil society leader Mambo Kawaya told AFP, saying that they were "asphyxiated by the gas" as they tried to cross the cooling lava some 13 kilometres (eight miles) north of Goma.

A sixth person is in a "critical state with trouble breathing and has been taken to hospital," Kawaya said.

Goma, a city of some 1.5 million people in the shadow of the volcano and on the shores of Lake Kivu, was on edge as violent aftershocks continued through the night and into Monday.

"They're multiplying and they come at any moment," one resident told AFP, describing the aftershocks as "very worrying".

"There is fear in our stomachs," she said.

Several strong aftershocks were also felt in neighbouring Rwanda on Monday, including a 5.1-magnitude earthquake under Lake Kivu in the Rubavu district at 0837 GMT, the Rwanda Seismic Monitor said.

A 4.5-magnitude quake followed at 1153 GMT, the RSM said on Twitter, adding that the tremors were being "produced by vibrations generated by the movement of magma within the volcano". 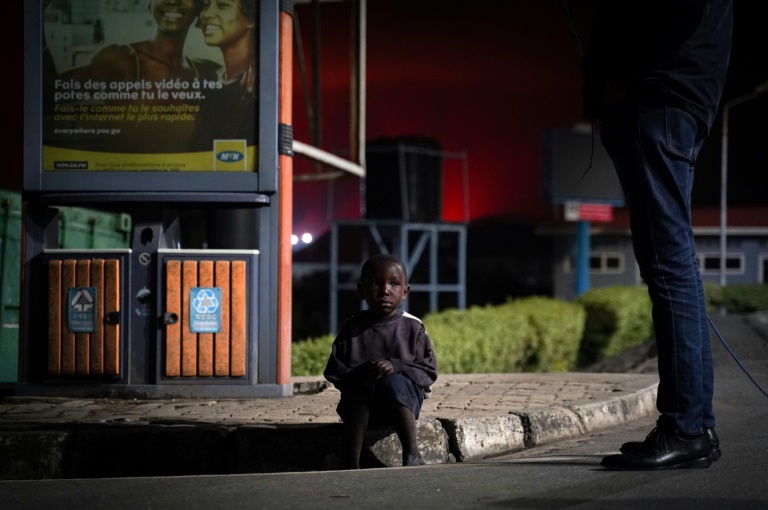 A lost child sits on a curb as people flee from Goma. UNICEF has said dozens of children have been separated from their parents.

A local volcanologist predicted the volcano was starting to calm down.

Nevertheless, the tremors that indicate the intensity of the eruption "have diminished in amplitude, which means the activity is diminishing," he said.

Tens of thousands of residents had fled the city in panic - around 7,000 of them to Rwanda - when Nyiragongo began erupting on Saturday evening. 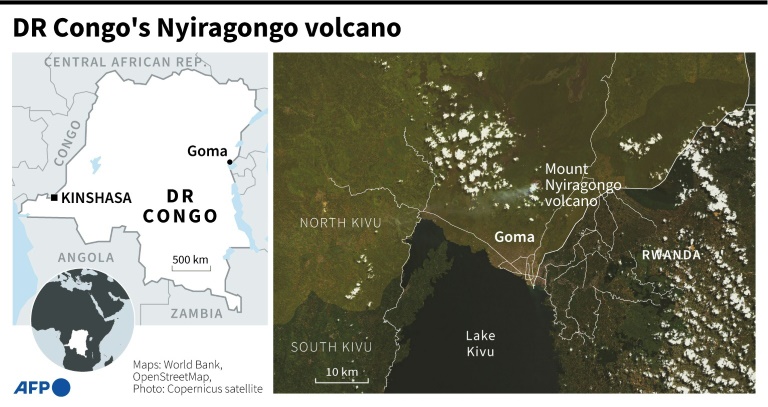 Along with the five people found dead on Monday, at least 15 other people have died, although most were not killed directly by the eruption.

Authorities said nine people died in accidents during the rush to evacuate, while four prisoners were killed while trying to escape in the melee. Two people were found burned to death.

While the river of lava stopped at the edge of Goma and many residents have now returned, each aftershock brought anxious residents back out onto the streets on Monday. 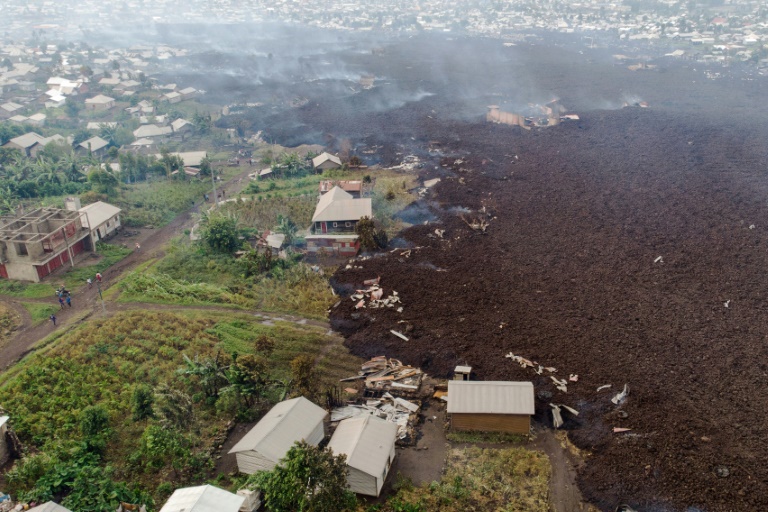 Red-hot lava from the Nyiragongo volcano swallowed up homes in its wake, although the city of Goma has largely been spared.

"We just had a big aftershock - I'm scared to stay in my office," said a resident who gave her name only as Deborah, an employee at an international organisation, reached by telephone.

"I'm wondering if I should stay or go home. The electricity has cut out," she said.

Schools are still shut with pupils told to stay at home, although businesses and petrol stations were open again.

By Monday the blackish solidified lava was still hot and smoking, with dozens of people turning out to inspect it or even walk on it, despite the risk of inhaling toxic fumes. 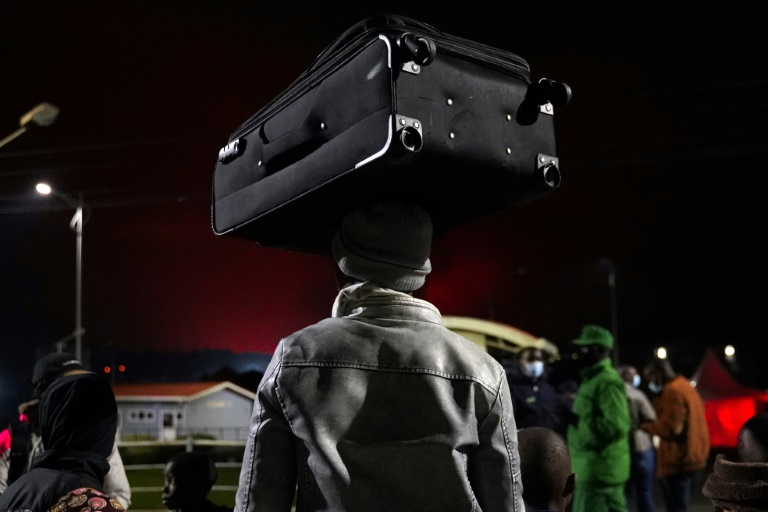 Tens of thousands of people fled their homes after the volcano erupted on Saturday.

A government delegation including seven ministers arrived from Kinshasa early Monday, while President Felix Tshisekedi has cut short a European tour to supervise the aid operation.

Health Minister Jean-Jacques Mbungani said upon his arrival in Goma that the delegation was set to organise support for people made homeless after the eruption after "assessing the state of affairs".

Hundreds of people spent Monday night in the street after the lava destroyed their homes.

Government spokesman Patrick Muyaya warned Sunday that the prices of food and other essentials are set to rise in Goma as the eruption has cut off several hundred metres of the road to Butembo, the region's main trade route.