Indian Prime Minister Narendra Modi and US President Donald Trump hold hands at the event in Houston billed as the largest gathering by a foreign leader other than the pope in the United States.

INTERNATIONAL NEWS - US President Donald Trump and Indian Prime Minister Narendra Modi on Sunday declared themselves united in a relentless fight against "terrorism," vowing a close, personal alliance in front of tens of thousands of Indian-Americans.

The two leaders, like-minded nationalists fond of fiery rallies and skeptical of traditional media, heaped praise on each other in an unusual joint appearance inside a football stadium in Houston.

To the bhangra beats of four drummers in saffron turbans, Trump in his dark suit and Modi in a yellow kurta and vest made a grand entrance with arms clenched together to ecstatic cheers from a crowd estimated by organizers at 50,000.

Trump won his biggest applause when he told the crowd, many wearing the saffron of India's right-wing Bharatiya Janata Party, "We are committed to protecting innocent civilians from the threat of radical Islamic terrorism."

Taking the flavor of one of Trump's own boisterous rallies, Modi later asked the crowd to give a standing ovation to Trump for his stance.

Trump has stood by the Indian leader during controversial decisions this year, including his revocation of autonomy for Muslim-majority Kashmir and his order for jets to enter Pakistani territory in response to a suicide bombing.

With Trump watching in the front row and listening to the translation, Modi made clear reference to rival Pakistan, which controls part of Kashmir and has sought to rally international attention over the Himalayan territory.

Modi said he was seeking equal status and development for Kashmir, adding that his actions were "causing discomfort to some people unable to manage their own country" and who "nurture terrorism." 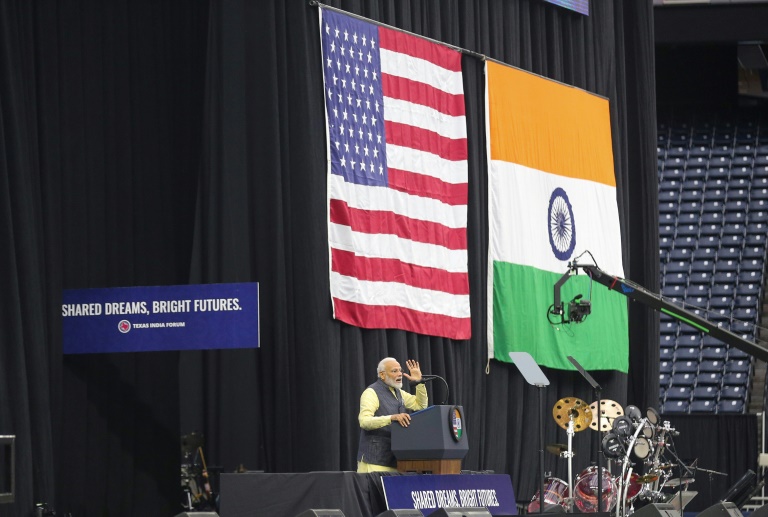 "These people have put their hatred of India at the center of their political agenda," Modi said.

India has also faced strong criticism from human rights experts for shutting down virtually all internet and cellular communications across much of Kashmir.

Protesters gathered outside of the NRG Stadium with placards and shirts that said, "Free Kashmir" and accused Modi of violating religious freedom - a cause frequently evoked by the Trump administration.

The event is billed as the largest gathering by a foreign leader other than the pope in the United States. 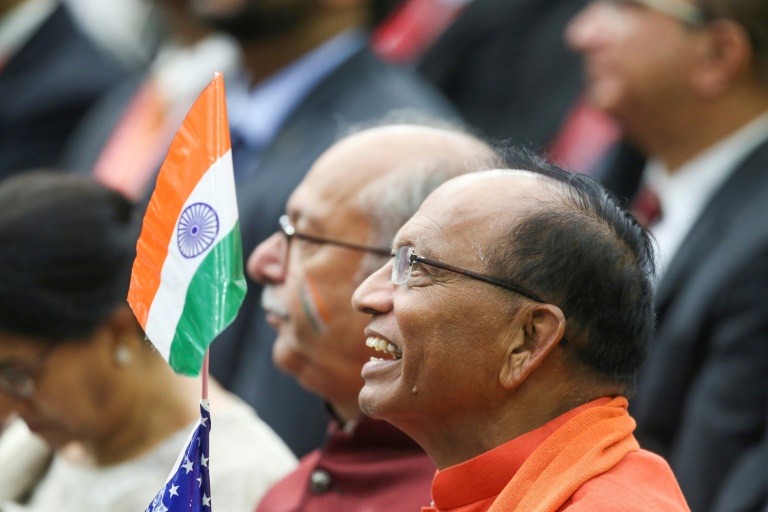 Steny Hoyer, the second-top Democrat in the House of Representatives, pledged that both major US parties wanted better relations with India - but gently voiced concern.

Citing India's apostle of non-violence Mahatma Gandhi, Hoyer pointed to "respect for secularism and human rights" as a founding value of the world's largest democracy.

"Americans and Indians must strive to make our promises and aspirations a reality for all our citizens," he said with Modi at his side.

Trump grinned broadly while Modi heaped praise on him, even invoking the president's "Make America Great Again" slogan as he hailed the state of the US economy.

But Indian-Americans voted overwhelmingly for his rival Hillary Clinton in 2016, despite high-profile Republicans in the community such as Nikki Haley, Trump's first ambassador to the United Nations. 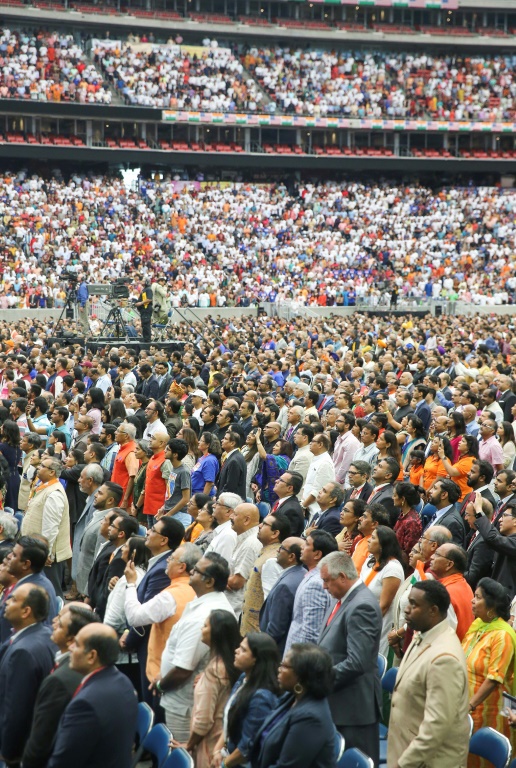 Organizers estimated the crowd at 50,000, many of whom wore the saffron of India's right-wing Bharatiya Janata Party.

Houston, one of the most ethnically diverse cites in the United States, is ground zero in the Democratic Party's inroads in Texas, a must-win state for Trump next year.

Speaking of his record as if on the campaign, Trump made no mention of many Indians' concerns over US visa policy - but highlighted his efforts to turn back undocumented immigrants from Central America.

"We are going to take care of our Indian-American citizens before we take care of illegal immigrants that want to pour into our country," Trump said.

Hardly known for his celebrations of ethnic diversity, Trump said to Indian-Americans, "We love you."

"You enrich our culture, you uphold our values, you uplift our communities and you are truly proud to be American - and we are proud to have you as Americans," he said.

Sporting a matching vest and sari in yellow embroidery from Modi's home state of Gujarat as well as caps in the Indian tricolor, Bhavin Parikh of Sacramento, California said he and his wife Shipti wanted to show their support.

"We are big fans of Modi and what he is doing for India and wanted to show our support," Parikh said.

He called the gathering "historic" due to Trump's presence. But he demurred on whether the gathering also indicated backing for Trump.

"It is not a question of Democrat or Republican. It's the American president supporting the Indian prime minister," he said.