Remains of 215 indigenous children were discovered at an old boarding school.

Justin Trudeau, shown here in Ottawa on April 20, 2020, said he was "appalled" by the historic practice of removing indigenous children from their families.

"As a dad, I can't imagine what it would feel like to have my kids taken away from me," Trudeau told a news conference. "And as prime minister, I am appalled by the shameful policy that stole indigenous children from their communities."

Trudeau, who has made reconciliation with Canada's nearly 1.7 million indigenous people a priority of his government since coming to power in 2015, said he would speak with his ministers to shore up "next and further things we need to do to support (residential school) survivors and the community."

Excavating school burial sites across Canada, as many have urged, he also said, "is an important part of discovering the truth."

"Canada will be there to support indigenous communities as we discover the extent of this trauma and trying to give opportunities for families and communities to heal."

The Tk'emlups te Secwepemc tribe said last week it had used ground-penetrating radar to confirm the remains of the students who attended a school near Kamloops, British Columbia.

The Kamloops Indian Residential School was the largest of 139 boarding schools set up in the late 19th century to assimilate Canada's indigenous peoples, with up to 500 students registered and attending at any one time.

It was operated by the Catholic church on behalf of the Canadian government from 1890 to 1969, before Ottawa took over its administration and closed it a decade later.

Official records showed only 50 deaths at the school, where a principal once pleaded for more funds to properly feed students.

As the nation mourned, flags atop government buildings were lowered to half-mast over the weekend.

Row upon row of children's shoes were left in front of parliament in Ottawa and on steps outside government offices and churches in several cities, forming makeshift memorials. 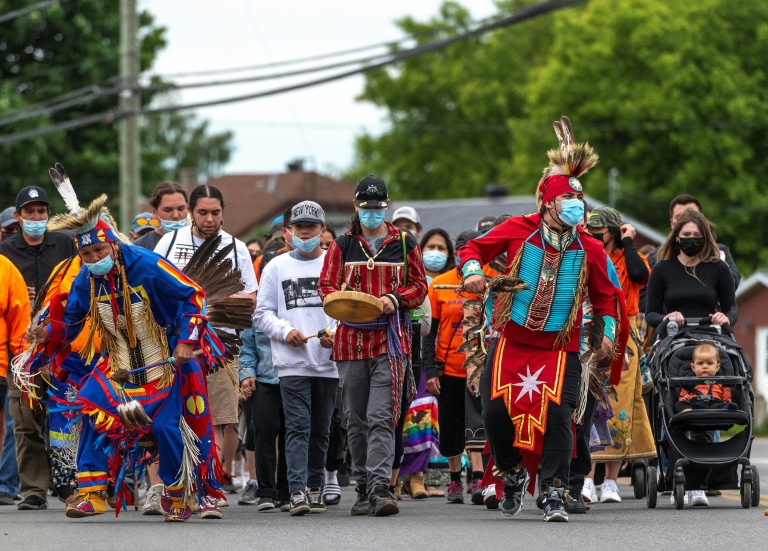 Members of the Mohawk community of Kahnawake, near Montreal, march through the town on Sunday to commemorate the news that a mass grave of 215 indigenous children were found at the Kamloops Residential School in British Columbia, Canada.

About 100 people, several in ceremonial attire, also marched Sunday in the Mohawk community of Kahnawake, near Montreal.

National chief of the Assembly of First Nations Perry Bellegarde was quoted by the Globe and Mail as saying former students and families "deserve to know the truth."

"A thorough investigation into all former residential school sites could lead to more truths of the genocide against our people," he added.

The British Columbia coroner is helping the Tk'emlups te Secwepemc tribe establish the causes and timings of the student deaths in Kamloops.

On Monday, opposition parties asked for - and Trudeau agreed to - an emergency debate in parliament on the "heart-breaking" discovery.

Some 150,000 Indian, Inuit and Metis youngsters in total were forcibly enrolled in these schools, where students were physically and sexually abused by headmasters and teachers who stripped them of their culture and language.

Today those experiences are blamed for a high incidence of poverty, alcoholism and domestic violence, as well as high suicide rates, in indigenous communities.

A truth and reconciliation commission has identified the names of, or information about, at least 4,100 children who died from abuse or neglect while attending a residential school. It estimates the actual toll is much higher.

The commission concluded in a 2015 report that more than a century of abuses at the schools amounted to "cultural genocide."

Seven years earlier, Ottawa had formally apologized as part of a Can$1.9 billion (US$1.5 billion) settlement with former students.

The National Centre for Truth and Reconciliation at the University of Manitoba, meanwhile, set up an online registry with the names of the thousands of children who never came home from the boarding schools, along with old class photos.