The veil begins to lift on coronavirus

But as the disease continues to spread across the globe, infecting and killing thousands, and causing millions to live in self-isolation, it has become a watchword for the daily life of billions.

Here are some of the questions that have been raised since coronavirus became headline news around the world:

Who is most at risk?
The severity of COVID-19, the disease caused by the new coronavirus, increases with age, as various studies have shown.

Published on March 31, the latest edition of the British medical journal "The Lancet" shows that the disease is on average much more dangerous for those over 60, with a mortality rate of 6.4 percent (among confirmed cases).

The mortality rate climbs to 13.4 percent for the over 80s against just 0.32 percent of deaths for the under 60s, according to studies made mainly on several hundred Chinese cases observed in February.

The last of these figures means that about one in five octogenarians develops a form serious enough to require hospitalisation.

Besides age, having a chronic illness - for example, respiratory failure, heart disease, history of stroke, cancer - is also a risk factor.

In a recent report on 10,000 deaths, the Italian Higher Institute of Health (ISS) identified common existing illnesses in the deceased.

The most common are hypertension (73.5 percent of cases), diabetes (31 percent) and coronary heart disease (27 percent).

Finally, according to an extensive analysis published on February 24 by Chinese researchers in the American medical journal "Jama", the disease is mild in 80.9 percent of cases, "serious" in 13.8 percent of cases and "critical" in 4.7 percent of cases.

How many deaths can we expect?
The statistical correlation between the number of deaths in the world and the total number of officially registered cases, suggests COVID-19 kills approximately five percent of diagnosed patients, with disparities according to different countries.

But that fatality rate has to be treated with caution as it is unclear how many people have actually been infected.

Since many patients seem to develop few or no symptoms, their number is likely to be greater than the cases detected, which would therefore lower this rate.

In addition, countries have very different testing policies and some do not systematically test all suspected cases.

A few weeks ago Anthony Fauci, director of the National Institute of Infectious Diseases in the US, told Congress that the fatality rate was much lower than five percent.

"If you count all the cases of minimally symptomatic or asymptomatic infections, that probably brings the mortality rates down to somewhere around one percent," he said, adding that this still makes coronavirus "10 times more lethal than the seasonal flu".

The study published in "The Lancet" on March 31 estimated the proportion of deaths among the confirmed cases at 1.38 percent.

However, the danger of a disease does not only depend on the overall death rate but also on its ability to spread.

Even if only one percent of patients die, "it can make significant figures if 30 percent or 60 percent of a population is infected," said Simon Cauchemez, of the Pasteur Institute in Paris.

The other factor that is affecting the fatality rate of this new disease is the congestion of hospitals, caused by a sudden and a massive influx of cases.

This complicates matters not only for those patients with severe forms of COVID-19 but for everyone else as well.

What are the symptoms?
According to the World Health Organization (WHO), the most common symptoms "include respiratory problems, fever, cough, shortness of breath and difficulty breathing".

Each of these symptoms may be present to a greater or lesser extent depending on the case, and the development of symptoms fluctuates.

Another common symptom is loss of smell and taste.

According to a recent Belgian study carried out on 417 patients who were "non-severely" infected, 86 percent had problems with smell - most of them no longer sensing anything - and 88 percent had taste disorders.

Symptoms usually last two weeks or more, sometimes less. For some people it will get worse.

"In the most severe cases, the infection can lead to pneumonia, severe acute respiratory syndrome, kidney failure, and even death," says the WHO.

There is no vaccine or medication, and managing the virus involves treating the symptoms. However, some patients are administered antiviral drugs or other experimental treatments, the effectiveness of which is still being evaluated. 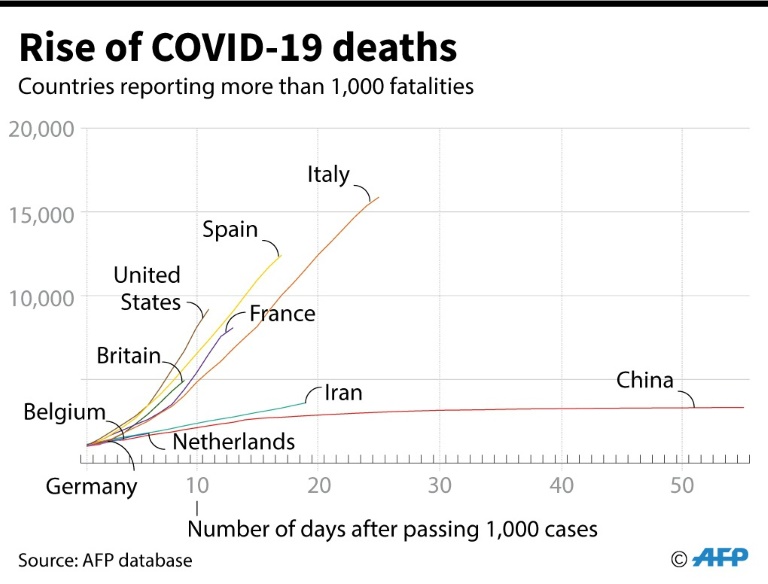 How is it transmitted?
The virus is mainly transmitted by a respiratory route and by physical contact.

Transmission occurs in the droplets of saliva expelled by a patient, for example when he coughs. Scientists estimate that this requires a close contact distance, of about one metre (3.3 feet).

To avoid contagion, health authorities emphasise the need to take precautions. These include washing hands frequently, coughing or sneezing in the crook of one's elbow or in a disposable handkerchief, and avoiding shaking hands and kissing.

They recommend wearing a mask if you are sick and point out that you can become infected by touching a contaminated object and then putting your hand to your face - eyes, nose or mouth.

A study published in mid-March in the American journal "NEJM" showed that coronavirus is detectable for up to two to three days on plastic or stainless steel surfaces, and up to 24 hours on cardboard.

However, these maximum durations are only theoretical, since they are recorded under experimental conditions.

"It only takes a little bit of the virus to remain on a surface to infect someone who touches it," warned French health authorities on their official website.

"Indeed, after a few hours, the vast majority of the virus dies and is probably no longer contagious."

Another unknown is whether coronavirus can be transmitted simply through breath rather than coughing or sneezing. This has been the subject of much speculation in recent weeks but nothing has yet been scientifically proven.

Can a person be infected twice?
Is it possible to be contaminated by the coronavirus, to recover and test negative, only to contract the virus a second time? Several cases in Asia have raised this question.

To the extent that these cases were isolated, scientists believe that these patients were probably never fully recovered in the first place.

The negative test can either come from the fact that it was not done properly or because at that point the presence of the virus in the body was very weak.

However, there is still no certainty about the level of immunity we can acquire against the coronavirus. Based on the example of other viral diseases, specialists believe that once cured, a person is temporarily immune, even if this is not yet proven.

Crucially however, it is not known how long this supposed immunity lasts.

"If theoretically, a person can maintain immunity for a prolonged period (for instance 12-24 months) post-recovery, they could conceivably safely return to public spaces even as the virus continues to circulate," says the Center for Strategic and International Studies (CSIS) in Washington.

"Inversely, if immunity is very short-lived, a person who has been infected could soon become reinfected."