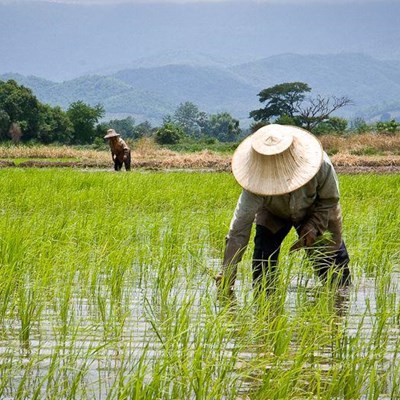 Rice farmers in Thailand. (Generic image)
INTERNATIONAL NEWS - Thousands of angry Thai rice farmers called off a threat to descend on Bangkok's main airport Friday in a rare reprieve for the embattled government after months of opposition street protests.

A convoy of tractor-riding farmers had planned to head to Suvarnabhumi Airport unless they received a promise of payment under a rice subsidy scheme that has become a political nightmare for the government.

But they stopped north of Bangkok and agreed to return home after apparently reaching a deal with Prime Minister Yingluck Shinawatra's administration. Local media said they had been promised they would get their payments next week.

The rice subsidy scheme, which paid farmers up to 50 percent above market rates, helped to propel Yingluck to power in 2011 on a wave of support from supporters in the rural north and northeast.

But the flagship policy has now become a political liability with farmers demanding payment after the government ran short of cash to buy their pledged crops late last year.

"It's very hard for me and my family because this government owes me 350,000 baht ($10,700)," said Virat Pennapa, 43, a rice farmer from the central province of Uthai Thani who was part of the convoy.

"I have to pay for fertiliser, labour and daily expenses," he said. "I don't know when I can go back home. It depends on when we win."

The scheme has left the kingdom with a mountain of unsold rice after Thailand lost its competitiveness on international markets.

The National Anti-Corruption Commission (NACC) has launched a probe into possible negligence of duty by Yingluck in connection with the rice policy -- a move that could potentially result in her removal from office and a five-year ban from politics.

Opposition protesters, who have set up stages and camps at various locations around the capital, accuse Yingluck's billionaire family of using public money to buy the loyalty of rural voters.

They want her to quit to allow a temporary unelected government to run the country and oversee loosely defined reforms such as anti-corruption measures.

Sixteen people have been killed and hundreds injured in street violence linked to opposition demonstrations.