Most passengers on the doomed flight were Dutch.

INTERNATIONAL NEWS - Four men accused of murder over the downing of Malaysia Airlines flight MH17 in 2014 went on trial in the Netherlands on Monday, with families of the 298 victims calling for justice.

The suspects - three Russians and a Ukrainian - were not present in the dock of the high-security court but judges ruled that the hearing could continue in their absence.

In a sombre moment, a prosecutor then read out the names of each of the men, women and children who died when the Boeing 777 was torn apart by a Russian-made missile over Ukraine while flying from Amsterdam to Kuala Lumpur.

Head judge Hendrik Steenhuis declared the trial open at the court near Schiphol Airport where the flight took off, adding that there had been a "tragic loss of human lives from all around the world" in the "atrocious disaster".

"The court realises the impact of the loss of so many lives and the manner in which they so abruptly ended is barely conceivable," he said.

Silence descended over the courtroom as the victims' names were read out with some relatives listening with bowed heads, many with their eyes closed, an AFP correspondent in court said.

"I think today is of the highest importance," said Piet Ploeg, head of a foundation for MH17 victims who lost his brother, sister-in-law and nephew on the doomed flight.

"This is the first day that we will know what happened, who was responsible, why the plane was shot down, and to questions like what was Russia's role."

Prosecutors say all four were linked to pro-Russian separatists on whose territory the plane's wreckage fell near the start of Ukraine's bitter civil war.

They argue the men were instrumental in bringing the BUK missile system to Ukraine from its original base in Russia - even if they did not pull the trigger.

Judges ruled that proceedings could go ahead "in absentia" against Girkin, Dubinsky and Kharchenko as Dutch, Russian and Ukrainian authorities had tried to contact them by post and by electronic media.

Girkin and Dubinsky had also been quoted by media as saying they did not recognise the Dutch court, the judges said.

A fourth suspect, Russian national Oleg Pulatov, would be represented by a lawyer but would not be present, the judge added.

Russia has long denied any involvement in the downing of MH17, and has offered a series of alternative explanations for the plane's downing.

Moscow again on Friday accused the Netherlands of a "crude attempt to put pressure on the court".

"In the last days before the hearings everything was done to fill the gaps in the evidence presented and to camouflage the falsification of the facts of this version in advance," Russian foreign ministry spokeswoman Maria Zakharova said. 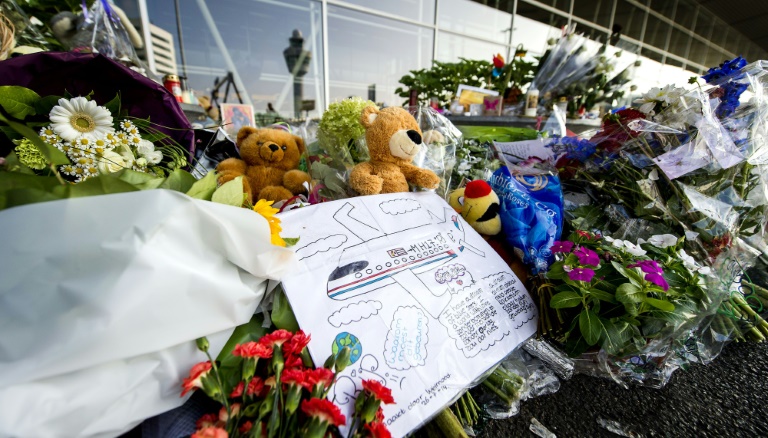 'An important moment' for victims' families.

But Dutch Prime Minister Mark Rutte said on Friday that the trial was being held in "full independence" and was a "very important step to get to the truth and to find justice for the victims and their relatives".

More than two-thirds of the victims - 196 in total - were Dutch.

US Secretary of State Mike Pompeo lent his support on the eve of the trial, saying he had "full confidence" in the Dutch justice system and those responsible "must be held accountable".

Girkin, 49, also known by his pseudonym "Strelkov", is the most high-profile suspect - a former Russian spy and historical re-enactment fan who helped kickstart the war in Ukraine.

Dubinsky, 57, who has also been tied to Russian intelligence, allegedly served as the separatists' military intelligence chief while Pulatov, 53, was an ex-Russian special forces soldier and one of Dubinsky's deputies.

If found guilty, the four suspects could be handed life sentences.

"For me, the most important thing is will there be enough evidence that the judge can make a conclusion - guilty. If that's the case, then I will be satisfied," said Anton Kotte, another family member attending the hearing.