President Donald Trump's first official visit to India is likely to be more about pomp and ceremony than concrete agreements.

INTERNATIONAL NEWS - Prime Minister Narendra Modi is set to welcome his US counterpart Donald Trump to India with a massive rally on Monday, kicking off a two-day visit likely to be more about pomp and ceremony than concrete agreements.

The American president, in his first official visit to India, will deliver a speech at the world's biggest cricket stadium at a "Namaste Trump" rally watched by at least 100,000 people in Modi's home state of Gujarat.

The rally comes in the wake of the wildly successful "Howdy, Modi" extravaganza in Houston last year that highlighted the bond between the nationalist leaders.

A visit to the Taj Mahal with the First Lady Melania is on the cards, followed by talks with Modi in the capital New Delhi on Tuesday.

"The president is going to India as a demonstration of the strong and enduring ties between our two countries," a senior US administration official told reporters ahead of the trip.

"This has been exemplified by the very close relationship between the president and Prime Minister Modi."

There were fevered preparations by workers in Gujarat's capital Ahmedabad on the stadium, where construction has yet to be completed and which officials said would be inaugurated at a later date rather than by Trump.

Across the city, giant cutouts of Modi, Trump and Melania were on display alongside national flags.

Thousands of posters with the words "world's oldest democracy meets world's largest democracy" and "two strong nations, one great friendship" were erected every 10 metres (around 30 feet) along Ahmedabad's major roads.

Trump meanwhile tweeted Sunday that he was looking "forward to being with my great friends in INDIA!" alongside a video showing his face imposed on hero "Baahubali" in one of India's biggest blockbusters of the same name.

Trade tensions
But behind the platitudes and warm rapport between the two leaders lies a fraught relationship worsened by the trade protectionism of both governments. 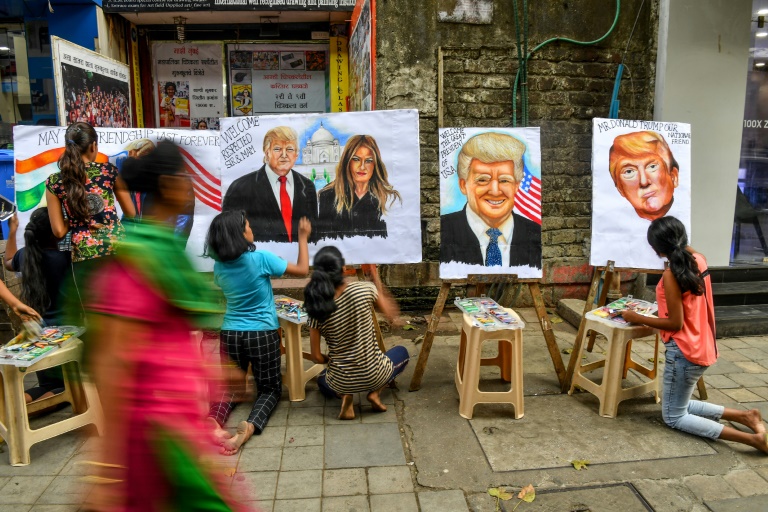 Behind the warm rapport between Trump and Modi lies a fraught relationship worsened by trade protectionism on both sides.

Tensions have risen with Trump's "America First" strategy to reduce the US trade deficit and Modi's "Make in India" drive for Asia's third-largest economy.

Rather than a wide-ranging trade deal, reports said Trump and Modi may instead ink smaller agreements covering Harley-Davidson motorcycle imports and American dairy products, as well as defence pacts.

Also on the cards could be the supply of six nuclear reactors, the fruit of a landmark atomic accord in 2008.

An Indian government spokesman said the South Asian giant "would not like to rush into a deal", adding that the issues involved were "complicated".

"The big missing deliverable at least for now seems likely to be the one both countries had sought, which is the trade deal," Tanvi Madan from the Brookings Institution told reporters.

Other points of friction include defence, with Russia remaining India's biggest supplier despite a possible $2.4-billion deal for American helicopters.

The US has pressured India to stop buying Iranian oil, while US businesses have raised concerns over New Delhi's plans to force foreign firms to store Indian consumers' personal data inside the country.

In Washington, India has faced criticism over its clampdown in restive Kashmir, and a recently passed citizenship law that critics say is anti-Muslim and which has led to ongoing protests across the nation.

A senior US administration official told reporters Trump would raise concerns about religious freedom in the Hindu-majority nation during the trip, "which is extremely important to this administration".

"We are concerned... and I think that the president will talk about these issues in his meetings with Prime Minister Modi and note that the world is looking to India to continue to uphold its democratic traditions, respect for religious minorities," the official added.