A Lebanese protester smashes the window of a bank in Beirut, with graffiti on the wall reading "banks are thieves", as demonstrators demand an end to a months-long political vacuum, with police firing tear gas at the start of a "week of wrath".

INTERNATIONAL NEWS - Public anger against cash-strapped banks boiled over in crisis-hit Lebanon where demonstrators armed with metal rods, fire extinguishers and rocks attacked branches in protest at controls that have trapped the savings of ordinary depositors.

The Red Cross said Wednesday that at least 37 people were injured in an overnight showdown during which protesters smashed windows of banks and scuffled with security forces in the capital's Hamra district.

Police said 59 people were detained, making it one of the largest wave of arrests since Lebanon's anti-government protest movement began on October 17 demanding a complete government overhaul.

As the movement nears the start of its fourth month, banks have become a prime target of demonstrators who charge them with driving the country towards its worst economic crisis since the 1975-1990 civil war.

On Wednesday morning in the commercial district of Hamra, a banking hub, almost every branch was left with smashed display windows, destroyed ATMs and graffiti-covered walls.

Banks opened their doors despite the wreckage, as cleaners wiped spray paint off walls and workers replaced window fronts.

With some ATMs destroyed beyond repair, passers-by looked on in astonishment at the aftermath of the night-time assault on banks.

"There is a lot of anger," Alia told AFP in front a damaged branch. "You have to go to the bank twice to withdraw just $200."

Banking controls
Banks have since September arbitrarily capped the amount of dollars customers can withdraw or transfer abroad, in a country where the greenback and the Lebanese pound are used interchangeably.

Although no formal policy is in place, most lenders have limited withdrawals to around $1,000 a month, while others have imposed tighter curbs.

Sparked by a grinding liquidity crunch, the controls are increasingly forcing depositors to deal in the plummeting pound, amounting to what experts are calling a de facto banking "hair cut".

The local currency has lost over a third of its value against the dollar on the parallel market, plunging to almost 2,500 against the US dollar over the past week.

The official rate was pegged at 1,507 Lebanese pounds to the greenback in 1997. 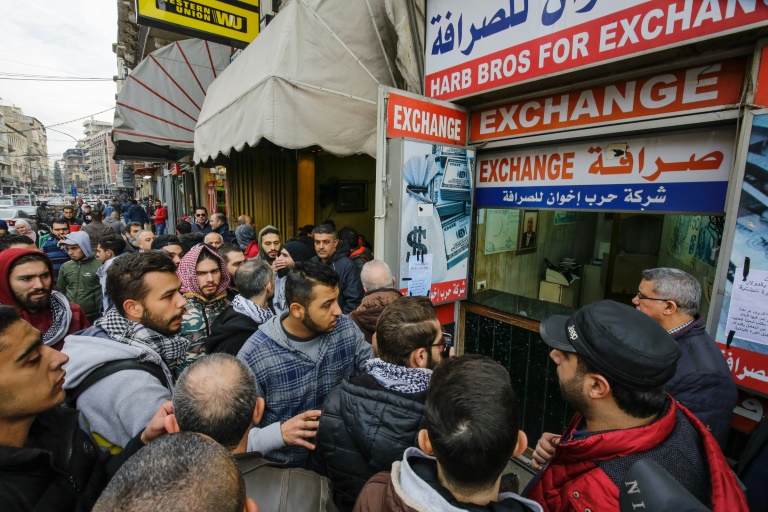 Lebanese anti-government protesters gather at the entrance of a currency exchange bureau in the northern port city of Tripoli.

Banks have as a result transformed into arenas of conflict, where shouting and tears abound, as depositors haggle tellers to release their money.

Compounding the situation, debt-burdened Lebanon has been without a government since Saad Hariri resigned as prime minister on October 29 under pressure from the anti-government protests.

Lebanon's under-fire politicians have yet to agree on a new cabinet line-up despite the designation last month of Hassan Diab, a professor and former education minister, to replace Hariri.

The designated premier has pledged to form a government of independent experts - a key demand of protesters - but acknowledged last week that some parties were hindering his attempts.

The UN envoy to Lebanon, Jan Kubis, on Wednesday condemned the wrangling between politicians who he said have turned a deaf ear to the country's woes.

"Politicians, don’t blame the people, blame yourselves for this dangerous chaos," he said in a strongly-worded statement, accusing them of standing by and watching the economy "collapse".

Piling extra pressure on the premier-designate, demonstrators have returned to the streets since Saturday after a brief lull over the end-of-year holidays.

They staged a demonstration Tuesday outside Diab's house at the launch of "a week of wrath".

But Hamra was the main target of Tuesday night's demonstrations, with protesters hurling stones and fire crackers at security forces who responded with tear gas.

They splattered walls with graffiti, vandalised street signs and sparked a blaze outside the Association of Banks head office.

Showing no sign of backing down, demonstrators called for another demonstration outside Lebanon's central bank building later Wednesday.

Main arteries were closed in north and east Lebanon and several schools stayed closed after the latest unrest.