With the threat of possible jail time hanging over him in his ongoing trial on corruption charges, the 71-year-old incumbent is unlikely to give up without a fight and analysts warned a messy battle could yet lie ahead.

INTERNATIONAL NEWS - Israelis eyed the end of an era Thursday after a motley alliance of parties from across the political spectrum agreed to form a government to unseat veteran Prime Minister Benjamin Netanyahu.

Opposition leader Yair Lapid announced the deal just minutes before a midnight (2100 GMT) Wednesday deadline, prompting celebrations into the early hours by the premier's opponents and a defiant show of support by his fans.

On paper, the prospective coalition commands a slender majority in parliament but a confidence vote is not expected for several days, giving Netanyahu time to woo potential defectors among the unlikely bedfellows ranged against him.

With the threat of possible jail time hanging over him in his ongoing trial on corruption charges, the 71-year-old incumbent is unlikely to give up without a fight and analysts warned a messy battle could yet lie ahead before his record 12 straight years in office come to an end. 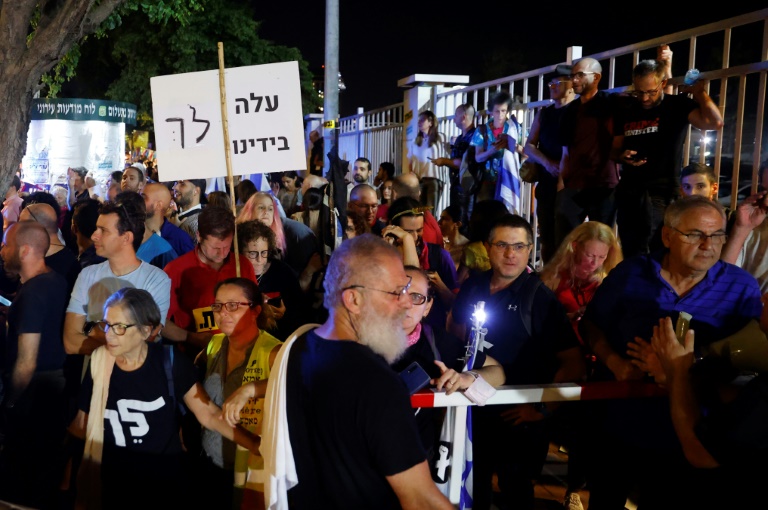 Lapid announced his new coalition late Wednesday, but must still iron out details with his seven partners before putting it to the vote in Israel's parliament, the Knesset.

There is some dispute over the precise deadline for him to do so. The current parliament speaker, a Netanyahu ally, could delay the vote until mid-June, although Lapid's coalition aimed Thursday to vote in a new speaker who could speed up the timeline.

His coalition would see the religious nationalist Naftali Bennett serve as prime minister for two years before Lapid, a secular centrist, would take the helm.

Supporters of Netanyahu, who is renowned as a ruthless political operator, worked to undermine the fledgling coalition.

Should last-minute defections scupper the "change" alliance, Israel would likely have to hold yet another election, the fifth in just over two years. 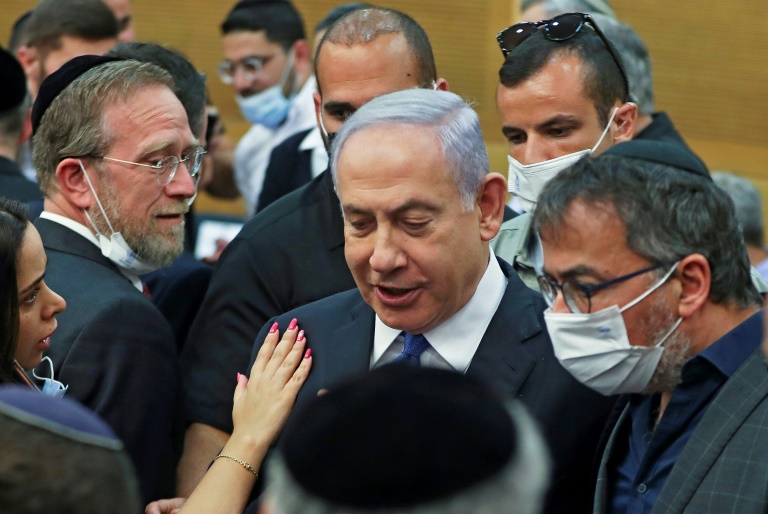 "Opening the champagne right now is a bit hasty," said Tamar Hermann, a political scientist at the Israel Democracy Institute.

Lapid, 57, a former TV presenter who heads the centrist Yesh Atid party, put his own prime ministerial ambitions on hold to broker the coalition deal.

"I succeeded," he proclaimed less an hour before the deadline.

"I promise that this government will work in the service of all of the citizens of Israel, those who voted for it and those who did not," he wrote on Facebook.

"We almost lost our hope and we hope that now after these two very hard years we will have an amazing new era that will finally bring our hope back to Israel," Kostukovksy told AFP.

The announcement capped four frenzied weeks of negotiations since President Reuven Rivlin tasked Lapid with trying to form a government after Netanyahu failed. 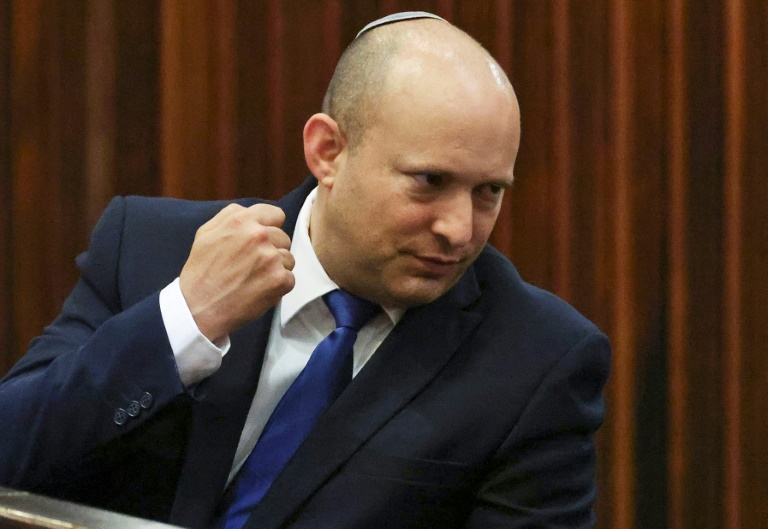 Naftali Bennett from the Yamina party.

Bennett, 49, an estranged former protege of Netanyahu, was the lynchpin of the deal to unseat the premier.

On Sunday Bennett, head of the hard-right Yamina bloc, announced he would join Lapid to end the "madness".

"Four elections ... have already proven to all of us that there is simply no right-wing government headed by Netanyahu. It is either a fifth election or a unity government," Bennett said.

Also part of the alliance are the Labor party, the dovish Meretz party, and the centrist Blue and White party of Defence Minister Benny Gantz. 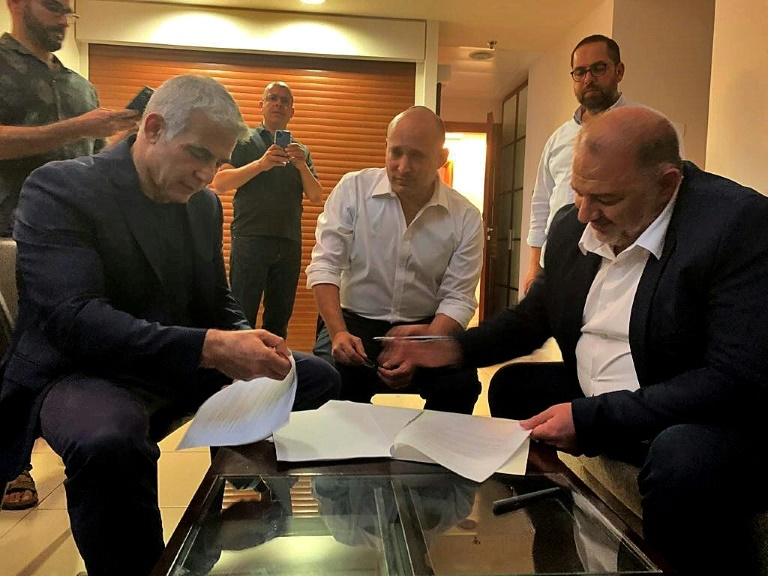 It released pictures of its leader Mansour Abbas signing a coalition agreement alongside Bennett, a staunch support of the Jewish settler movement.

Speaking on army radio Thursday, Abbas said: "We obtained the legitimacy to influence the Israeli political system and not just to be present there in the Knesset."

Raam previously ran as part of the Arab-led Joint List but broke away over ideological differences with its communist and Arab nationalist members.

Several of the bloc's remaining members said they would vote to oppose a government headed by Bennett.

Allies of Netanyahu, 71, lashed out at the coalition. 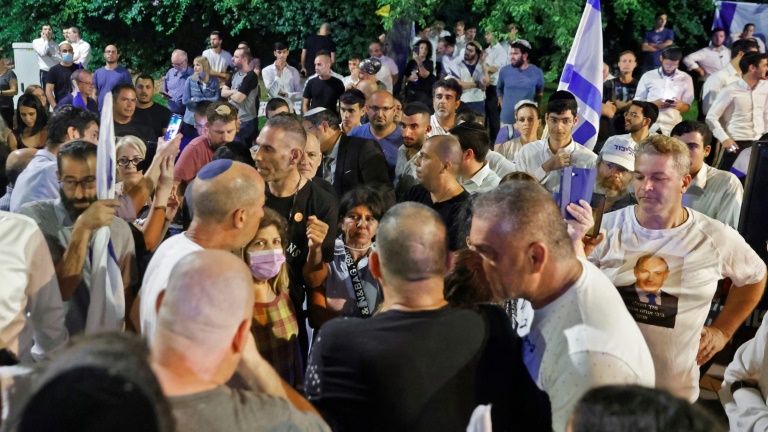 Fans of Israeli Prime Minister Benjamin Netanyahu gather in Tel Aviv for a defiant rally in his support.

Far-right lawmaker Bezalel Smotrich, head of the pro-Netanyahu Religious Zionism party, attacked the coalition's dependence on the votes of Arab lawmakers, accusing Bennett of cooperating with "a terrorism supporter who identifies with Israel's enemies."

Yamni member Matan Kahana hit back, telling public radio Thursday: "I'm convinced this government will be even more right-wing than the government of Netanyahu."

Opponents of the coalition planned a protest Thursday outside the Tel Aviv home of Yamina lawmaker Ayelet Shaked.

Hermann, the political scientist, said Benjamin Netanyahu could still thwart the coalition, but "it's not highly likely."

"Although he is fighting the battle of his life, clearly even in his own party, he is more of a liability than an asset right now," she said.