Hong Kong police round up activists ahead of rally

Joshua Wong was one of the key figures behind the 2014 Umbrella Protests, but 2019's demonstrations have been largely leaderless.

INTERNATIONAL NEWS - Prominent Hong Kong democracy activists were arrested Friday in a dragnet that came as protesters planned to rally this weekend in defiance of a police ban.

Hong Kong has been locked in a three months of political crisis, with increasingly violent clashes between police and protesters that have prompted an escalating public relations campaign from Beijing.

Protesters planned yet another mass rally on Saturday - the fifth anniversary of Beijing's rejection of a call for universal suffrage in the semi-autonomous city, a decision that sparked the 79-day Umbrella Movement in 2014.

Two of that movement's leaders, Joshua Wong and Agnes Chow - both are well-known among the city's youth - were arrested on Friday, their party said.

Their arrests came just hours after the reported detention at Hong Kong's airport of a vocal independence campaigner.

"Our secretary-general @joshuawongcf was just arrested this morning at roughly 7:30," the party Demosisto tweeted.

The 22-year-old "was forcefully pushed into a private minivan on the street in broad daylight. Our lawyers following the case now," it said.

Agnes Chow, also 22, was arrested at her home, Demosisto said, adding "we do not yet know what charges they are facing."

Hong Kong Police said they had arrested two 22-year-olds, naming them only as Wong and Chow, on suspicion of "inciting others to take part in unauthorised assembly" among other charges. 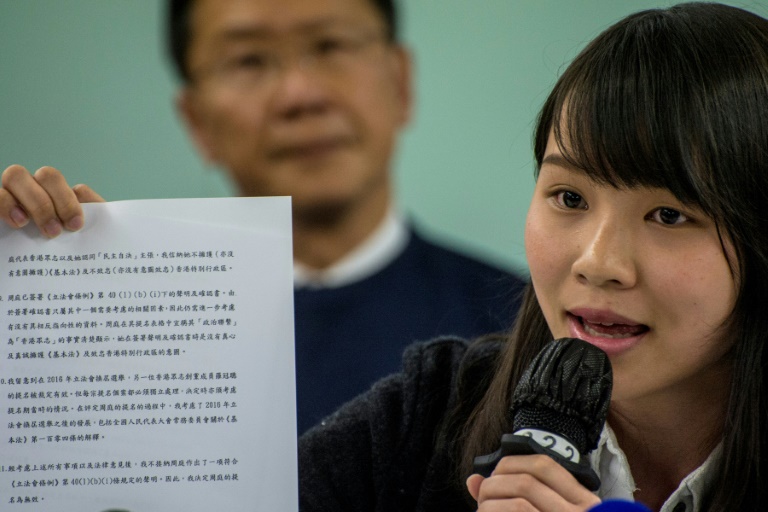 Agnes Chow, seen here in February 2018, was arrested at her home on Friday morning, her political party said.

More than 850 people have been arrested in connection with protests since June, including prominent independence campaigner Andy Chan who was detained by police at Hong Kong airport on Thursday night.

Chan was stopped while trying to board a flight to Japan, the Hong Kong Free Press website reported, which cited a police spokesman saying he was suspected of rioting and assaulting an officer.

Chan's small independence party was outlawed last year on the grounds it posed a national security threat, the first such ban since the former British colony returned to Chinese rule in 1997.

The party numbers only a few dozen members, but Beijing sees calls for independence as an absolute red line.

The arrests come as Hong Kong's crisis-hit government scrambles to find an appropriate response to the unprecedented pro-democracy protests, which have by turns seen millions march, closed the airport and left city streets strewn with bricks and shrouded in tear gas.

The protests started as a kickback against a bill allowing extraditions to mainland China, but quickly billowed out into wider calls for democracy and police accountability.

Permission for another mass rally on Saturday was denied on security grounds, raising the likelihood of another weekend of clashes between police and protesters.

In a letter to rally organisers the Civil Human Rights Front (CHRF), police said they feared some participants would commit "violent and destructive acts".

On Friday morning, Jimmy Shan, a key organiser of the avowedly peaceful group, said the rally would be pulled for safety reasons if an appeal to police fails.

But a hardcore minority among the protesters, mainly young students, are unlikely to heed the police ban, setting up another weekend of violent clashes.

Student protester Kelly, who wanted to be identified only by her first name, said the arrests would not cow the movement. 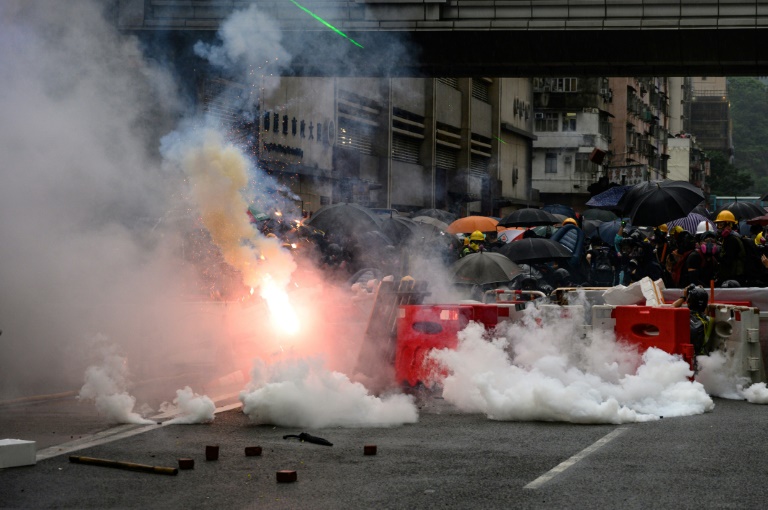 There have been weeks of often-violent clashes between police and protesters.

"The police think there are leaders behind the protests and this will stop us. We are our own leaders and we will keep coming out.

"The government doesn’t understand this."

On Sunday the city saw some of its worst clashes, with running battles between black-clad protesters, armed with bricks and Molotov cocktails, and police wielding batons, rubber bullets and tear gas.

One officer fired a warning shot - believed to be the first live round used during the protests - as a mob with sticks set upon several policemen.

The violence has shredded Hong Kong's reputation for stability and prosperity.

China has responded with a campaign of intimidation, with a slick PR video released Thursday showing troop movements into Hong Kong as part of "routine garrison rotation".

Businesses in the financial hub - from airline Cathay Pacific to the city's metro operator - have also been squeezed by Beijing for harbouring apparent supporters of the pro-democracy movement.

Protesters say freedoms in the semi-autonomous city, unique within China, are being eviscerated by Beijing.

Under the terms of the 1997 handover deal, the city has rights and liberties unseen on the mainland, including an independent judiciary and freedom of speech.