Nasheed is a former Amnesty International prisoner of conscience after being sentenced to 13 years in prison in 2015 on terrorism charges slammed as politically motivated by civil rights groups.

The Indian Ocean archipelago’s first democratically elected leader was hurt when a device attached to a motorcycle was detonated as he got into a car late Thursday, an official said.

"Nasheed escaped an assassination attempt," a Maldivian government official told AFP. "He is injured, but his condition is stable."

Images on social media showed a destroyed motorbike at the scene of the attack.

Armed police units and security forces cordoned off the area in the capital Male where the attack took place, and the Maldivian parliament, which was in recess, called an emergency meeting following the attack.

President Ibrahim Mohamed Solih, a close ally of Nasheed, said an investigation was under way as officials rushed to denounce the targeted attack on the country’s second most powerful figure.

"Strongly condemn the attack on Speaker of Parliament, President Mohamed Nasheed this evening. Cowardly attacks like these have no place in our society," Foreign Minister Abdulla Shahid said in a tweet.

"My thoughts and prayers are with President Nasheed and others injured in this attack, as well as their families," he tweeted. 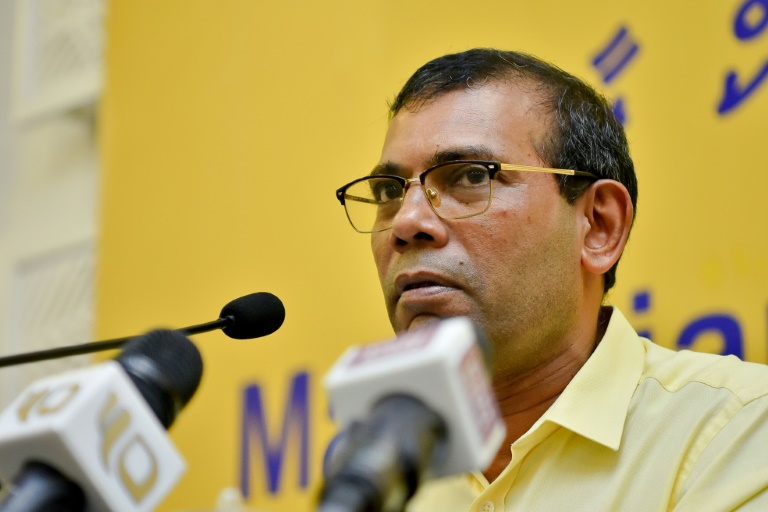 Nasheed is a former Amnesty International prisoner of conscience who became the country's first democratically elected president in 2008.

"They have put him under anaesthesia. There is a deeper cut on one of his arms," the family member told AFP, speaking on condition of anonymity.

The relative said Nasheed was responsive and spoke with doctors as he was admitted with shrapnel injuries. One of his bodyguards was also taken to hospital.

The Indian Ocean nation of 330,000 Sunni Muslims is best known around the world for its luxury holiday resorts popular with honeymooners, but it suffers from regular political turmoil.

The government has cracked down on extremism and preaching is highly regulated, but violent attacks have been rare. However, a dozen foreign tourists were wounded by a bomb blast in Male in 2007.

The Islamic State claimed a boat arson attack last year but there is little evidence the group has a presence in the archipelago. 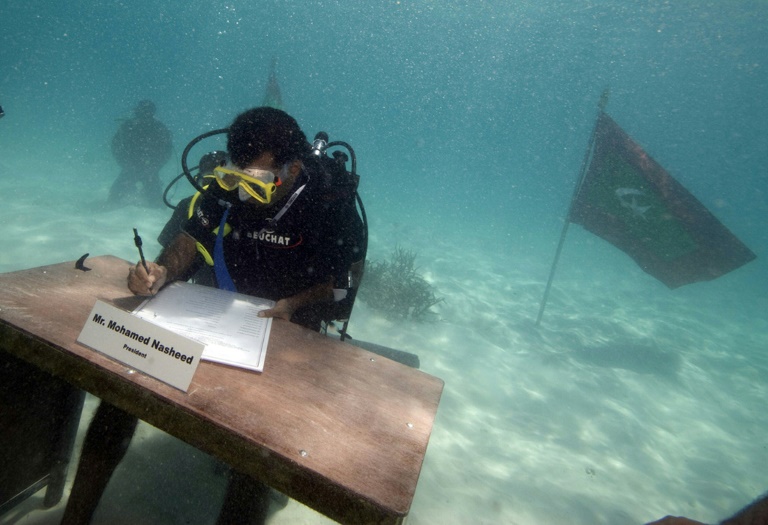 The pro-democracy pioneer is maybe best known internationally for holding a 2009 underwater cabinet meeting to highlight the threat of global warming.

Nasheed rose to become the Maldives’ first democratically elected leader in 2008 in the country’s first multi-party elections after 30 years of autocratic rule.

But the pro-democracy pioneer is maybe best known internationally for holding a 2009 underwater cabinet meeting to highlight the threat of global warming, signing documents as officials wore scuba gear against a backdrop of coral reefs.

"What we are trying to make people realise is that the Maldives is a frontline state. This is not merely an issue for the Maldives but for the world," he said at the time.

He resigned three years later after protests against his rule and has failed to reclaim the presidency despite several attempts. Instead, he secured the position of parliamentary speaker in 2019, retaining his influence in political life.

Nasheed is a former Amnesty International prisoner of conscience after being sentenced to 13 years in prison in 2015 on terrorism charges slammed as politically motivated by civil rights groups.