Some 13,000 migrants massed at Turkey's border with Greece over the weekend.

INTERNATIONAL NEWS - Turkish President Recep Tayyip Erdogan warned Monday that "millions" of migrants will soon head for Europe as he mounted pressure on Western countries to give Turkey more assistance with the Syrian conflict.

Erdogan also said he hoped to reach a deal on a ceasefire in Syria when he meets his Russian counterpart Vladimir Putin later in the week following intense fighting in the last rebel holdout of Idlib.

He warned Europe that it will have to shoulder its part of the refugee crisis triggered by violence in the region.

"After we opened the doors, there were multiple calls saying 'close the doors'. I told them 'it's done. It's finished. The doors are now open. Now, you will have to take your share of the burden'," he said.

Thousands of migrants and refugees, including Afghans, Syrians and Iraqis, have massed at Turkey's border with Greece after Erdogan announced on Friday that Turkey would no longer prevent them from leaving for the European Union.

He claimed the numbers were far higher, saying the numbers had already hit "hundreds of thousands".

"There will be more. Soon, this number will be expressed in millions." 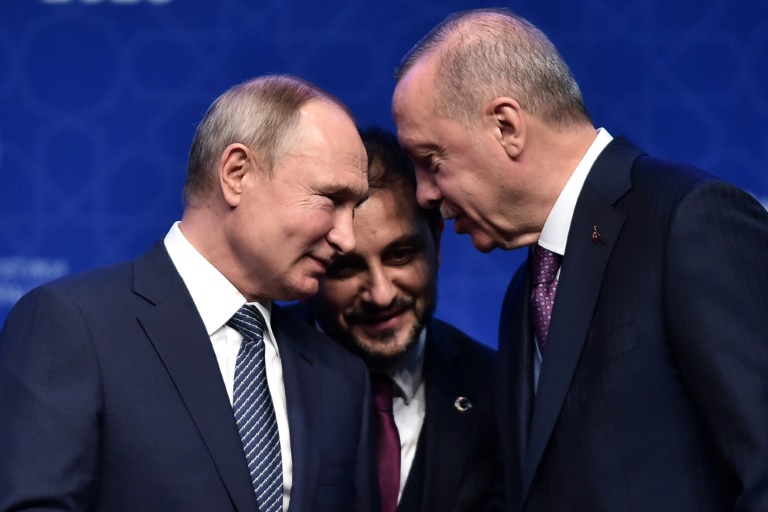 Russian President Vladimir Putin and his Turkish counterpart Recep Tayyip Erdogan are due to meet on Thursday.

Clashes erupted as Greek police blocked thousands at the border at the weekend, firing tear gas at the refugees who responded by lobbing rocks.

In desperation, many sought alternative routes and Greek port police said a young boy had died when an overloaded makeshift boat capsized off the coast of Lesbos.

Athens said it would boost land and sea patrols and was suspending asylum applications by those who entered the country illegally. 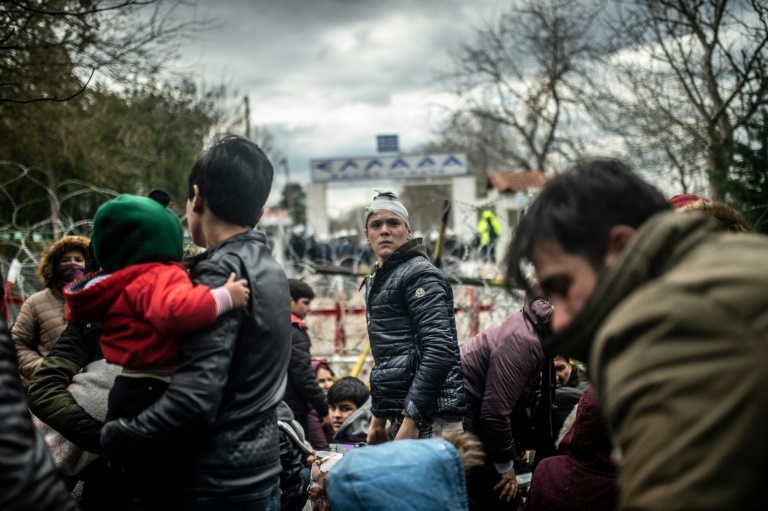 Clashes erupted as Greek police blocked thousands at the border, firing teargas at the refugees who responded by lobbing rocks.

Turkey hosts some four million refugees - the majority of them Syrians - but agreed in 2016 to prevent them leaving for Europe in exchange for billions of euros in assistance.

A spokesman for German Chancellor Angela Merkel said the EU expects Turkey to uphold its part of the deal.

EU chiefs were set to visit the Greek border on Tuesday, amid fears of a repeat of the refugee influx that poisoned European politics in 2015.

The migrant question comes as Turkey has launched a military operation in Idlib in northwestern Syria, after weeks of mounting tensions with the regime, which has unleashed a devastating offensive, backed by Russian air power, to retake the province. 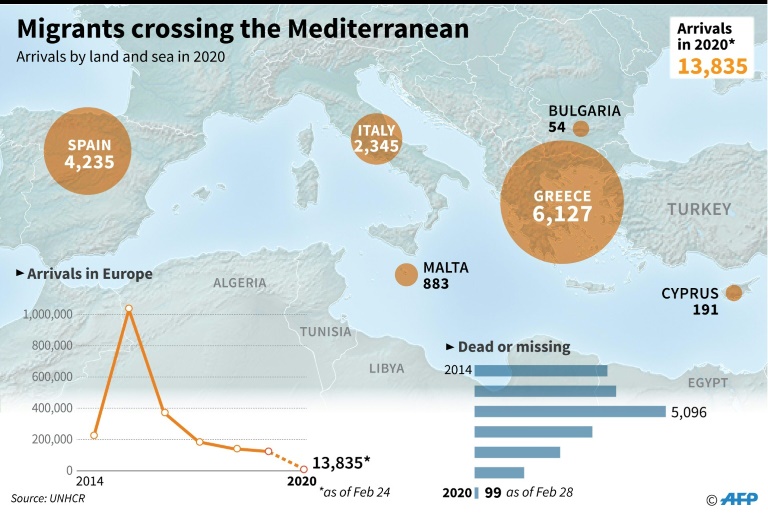 The Syrian government pledged to repel Turkish forces, telling the official SANA news agency that it was "determined to confront the flagrant Turkish aggression".

Erdogan's office confirmed he will hold a summit with Putin in Moscow on Thursday to discuss the escalating violence.

"I hope that he (Putin) will take the necessary measures there, such as a ceasefire, and that we will find a solution to this affair," Erdogan said in a televised speech.

The Kremlin said cooperation with Turkey was a top priority.

"Our militaries are in constant contact. The main thing is that we now focus on negotiations between Putin and Erdogan," a spokesman said.

Close to one million people have been forced to flee the violence in Idlib in the biggest wave of displacement of the nine-year conflict.

Turkey backs certain rebel groups and has observation posts in the area under a 2018 deal with Russia that was supposed to prevent a full regime assault. 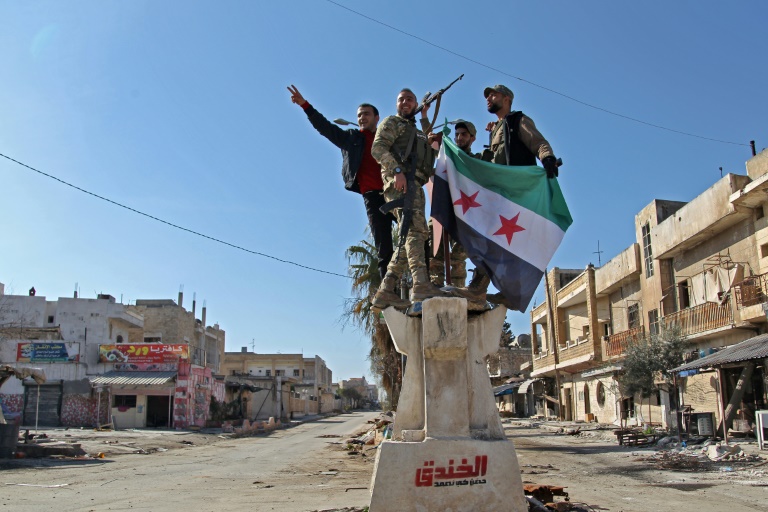 Turkey-backed Syrian fighters celebrate in the town of Saraqeb in the eastern part of the Idlib province in northwestern Syria.

But the Syrian regime has made steady progress since December, and on Monday, retook the town of Saraqeb, according to the Syrian Observatory for Human Rights, a Britain-based war monitor.

"Regime forces with Russian air cover were able to retake complete control of the town of Saraqeb on the Damascus-Aleppo highway," it said.

Tensions between Turkey and Syria reached new heights last week when 34 Turkish soldiers were killed in an air strike blamed on Damascus, its heaviest loss since it first intervened in the conflict.

Turkey retaliated with an operation that saw two Syrian warplanes shot down on Sunday, as well as at least 19 Syrian soldiers killed in drone strikes.

Erdogan said Monday that Syrian losses were "just the beginning" unless it pulled back behind the borders agreed under the 2018 deal.

Turkey remains determined to avoid a direct clash with Russia, with which it shares significant defence and trade ties.

Despite being on opposing sides of the conflict, Ankara and Moscow have coordinated closely in the past, and there are hopes that Thursday's summit will lead to a new ceasefire.