US President Donald Trump is expected to raise concerns about religious freedom during his lightning visit to India.

INTERNATIONAL NEWS - India rolled out the red carpet on Tuesday for US President Donald Trump on the second day of a visit high on spectacular optics, but deadly unrest exposed religious tensions that his host is accused of stoking.

The violence in New Delhi on Monday just as Trump arrived began as a standoff between supporters and opponents of a new citizenship law but degenerated into running battles between Hindus and Muslims, local media reported.

The law, which critics say forms part of Prime Minister Narendra Modi's Hindu nationalist agenda - which he denies - has sparked weeks of protests and violence but the fatalities were the first since December.

The five dead in Delhi's northeastern fringes included a police officer. More than 90 people were also wounded, police and hospital sources said, as the rioters armed with stones and even guns went on the rampage, setting fire to buildings and vehicles. 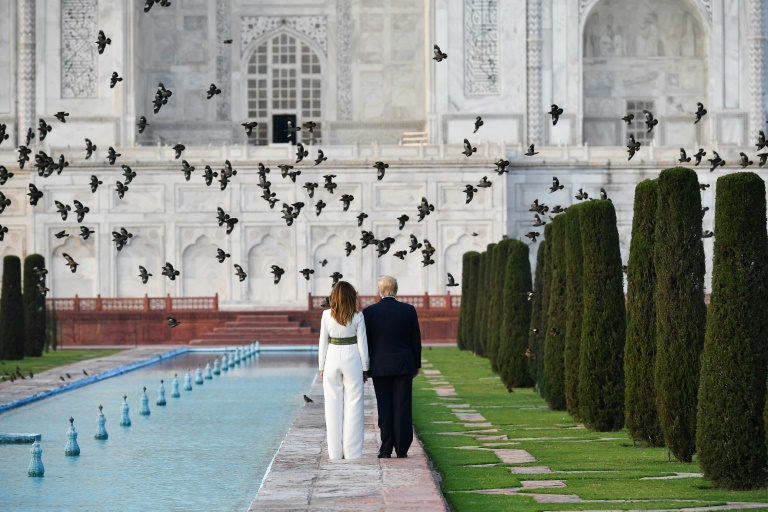 Behind the bonhomie and photo opportunities during US President Donald Trump's visit to India, a comprehensive trade deal between the two countries looks remote.

The authorities responded with tear gas and smoke grenades, sending in paramilitary security forces, shutting schools and banning the assembly of more than four people in the areas affected. Further rioting was reported on Tuesday.

The law has raised worries abroad - including in Washington - that Modi wants to remould secular India into a Hindu nation while marginalising the country's 200 million Muslims, a claim Modi denies.

A senior US official told reporters that Trump would raise concerns about religious freedom during his lightning visit, calling them "extremely important to this administration".

Arriving on Monday Trump hailed India and its "tremendously successful" but "very, very tough" Modi at a rowdy rally of 100,000 at the world's largest cricket stadium in Modi's home state Gujarat.

The razzmatazz of the "Namaste Trump" event was recompense for a "Howdy Modi" extravaganza in Houston last year when the two leaders held hands and Trump compared Modi to Elvis Presley.

Trump and Melania flew to the Taj Mahal where they held hands at sunset. Daughter Ivanka and son-in-law Jared Kushner also made the most of the photo opportunity. 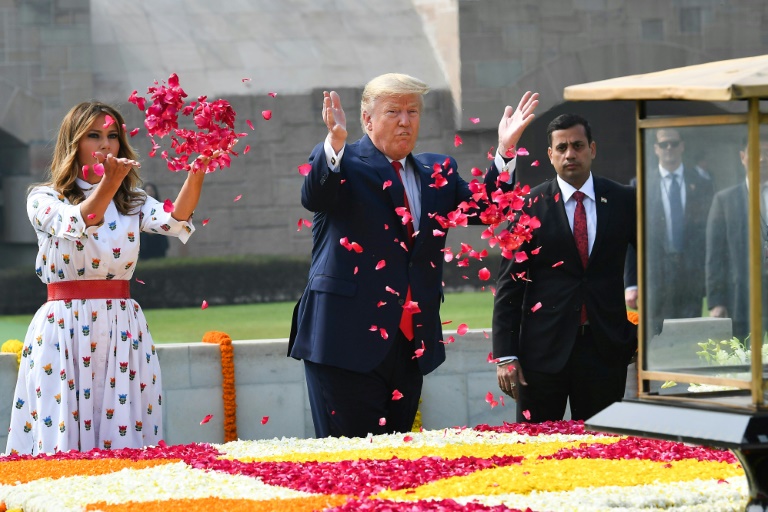 On Tuesday Trump and Melania, in a buttoned-down floral print shirt dress, were given a ceremonial welcome with red-coated and turbaned mounted troops, booming cannons and the "Stars and Stripes".

Shedding their shoes they then laid a wreath and showered petals at the open-air memorial where independence hero Mahatma Gandhi was cremated before they planted a tree.

But then Trump and Modi got down to brass tacks.

Behind the bonhomie and photo opportunities, a comprehensive trade deal between the world's biggest economy and the country projected soon to be its most populous looks remote.

While small fry compared to his trade war with China, Trump has imposed tariffs on Indian steel and aluminium and suspended duty-free access for certain goods. 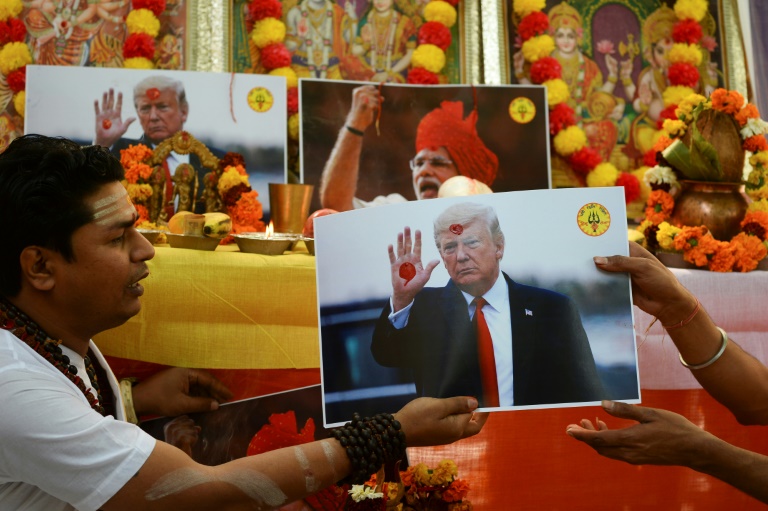 US President Donald Trump has called India the "tariff king", and said before his visit that Asia's third-largest economy had been "hitting us very, very hard for many, many years".

Modi, whose "Make in India" mantra echoes Trump's "America First" slogan, has responded with higher tariffs on certain US goods like $600 million worth of Californian almonds.

Trump has called India the "tariff king", and said before his visit that Asia's third-largest economy had been "hitting us very, very hard for many, many years".

Away from trade, Trump and Modi will reportedly sign $3 billion worth of defence deals including for navy helicopters, and discuss a $1.9-billion missile defence shield.

This underscores both countries' concerns about growing Chinese clout. Last year the US and India signed a big military cooperation agreement.

India may also agree to buy five nuclear reactors, the fruit of a landmark but contentious atomic deal signed in the 2000s.

Against that backdrop, the First Lady was due to visit a school to watch a "happiness class" in which children meditate and focus on mindfulness to make them better pupils and citizens.

The curriculum was launched in 2018 by Tibetan spiritual leader the Dalai Lama and has piqued the interest of Melania Trump who has promoted a "Be Best" initiative for US kids.