INTERNATIONAL NEWS - Eskom’s generating plant breakdowns took out a stratospheric 15 921 megawatts (MW) on Saturday at 06:30, the highest level yet, which means an astonishing 40% of its coal fleet of around 40 000 MW was offline.

This is higher than the 15 200 MW of outages on Tuesday, December 10, the day after the utility was hit by a “perfect storm” (flooding power stations, wet coal, broken conveyors at Medupi Power Station, and very little renewable power being fed into the grid because of the heavy rains), which necessitated Stage 6 load shedding.

Since the last instance of load shedding in 2019 (Stage 2 on 13 December, with 12 000 MW out of service), Eskom has not made any headway in reducing the alarmingly high level of breakdowns. In fact, the situation has worsened.

Read: Eskom’s ‘credible’ plan to keep the lights on
Since 19 December (Eskom did not disclose breakdowns for the week prior), the level of unplanned breakdowns across its generating fleet has been above 12 500 MW. On five of the 14 days disclosed – it skipped holidays – breakdowns were above 14 000 MW. 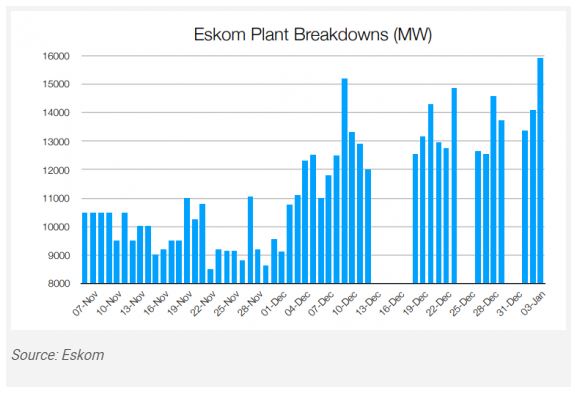 Even with lower seasonal demand, it is almost certain that Eskom has been relying on emergency generation resources, including pumped storage schemes and open cycle gas turbines (OCGTs), to keep the lights on over the holiday period.
Read: Load shedding: How did it suddenly get to this?
While demand dropped significantly from 13 December as mines and factories shut down, the load has remained at around the 26 000 MW level. Using 2018 published data, it is clear that load only drops below 25 000 MW for the week between Christmas Day and New Year’s Day.
Another conveyor failure at Medupi necessitated the emergency Stage 2 load shedding at 22:00 on Saturday night.
Eskom said this step was necessary because it had to replenish water levels at its pumped storage schemes and diesel at its OCGTs overnight in preparation for the week ahead. On Sunday morning, however, Eskom said the “loss of additional generation units caused us to have to deplete our diesel and pump storage levels, which we need to restore as we head into the working week on Monday”. It has since repaired the conveyor belt failure at Medupi.
Koeberg unit back

Usefully for Eskom, demand generally ramps up across the next two weeks as mines and factories reopen. Using last year’s data, it is clear that peak load only returns to ‘normal’ summer levels of around 28 000 MW by January 15. This means it won’t suddenly face ‘normal’ demand today (Monday, January 6).

In addition, based on performance in December, non-commercial generation (the units at Kusile Power Station) has been able to add up to 900 MW to capacity, which Eskom desperately needs.

Perhaps most importantly, the utility noted on Saturday that Koeberg Unit 1 will return to service in the coming weekend following planned maintenance. Each Koeberg unit provides 930 MW of baseload power, which makes this return to service significant. It will take about a week for the unit to ramp up to full generation, which will be helped by the ramp-up in demand.

Eskom admitted on Saturday that “the current high level of unplanned breakdowns is of concern”.

It added that teams are working flat-out to ensure that the risk of load shedding is minimised as South Africa returns to work.

The utility continues to forecast using the assumption of 9 500 MW of unplanned outages, which is completely unrealistic. At this level, it provided a forecast in December of “no shortage” of capacity for the first quarter of the year. However, under its so-called “likely risk scenario” of around 13 700 MW of unplanned breakdowns, there are shortages from February.

Deferring maintenance
Worryingly, Eskom decreased the level of planned maintenance in December and January to artificially low levels to keep the lights on. Typically, in the summer months, it should have around 6 000 MW of capacity out of service for planned maintenance. This was the plan until December, when the wheels came off. Instead of doing maintenance on upwards of 6 000 MW of capacity in the week commencing December 16, it is likely that this figure was far closer to 4 000 MW.

It is difficult to know exactly what is going on given that the utility may elect to do planned maintenance during a breakdown. However, the trend is not good.

The original plan was to do maintenance on between 5 000 MW and 6 500 MW of capacity across January. In the most recent update (pre-Christmas), those peak weeks have been revised down to just over 4 000 MW. This is very bad news for winter: the ageing plants simply become more unreliable as the maintenance backlog increases.

It remains to be seen what a more accurate forecast for the first quarter of 2020 looks like. If breakdown levels remain stubbornly high (above 12 000 MW), load shedding will be the norm until Easter.

We will know by midweek when this data is published.