The European Union and the United States have sanctioned Lukashenko and dozens of officials and businessmen tied to his regime with asset freezes and visa bans.

Protasevich was on Sunday aboard a Ryanair flight to the Lithuanian capital Vilnius, which reportedly made an emergency landing in Minsk following a bomb scare.

INTERNATIONAL NEWS - Belarus forced an Athens-to-Vilnius Ryanair flight carrying a wanted opposition activist to divert and land in Minsk Sunday, provoking an outcry from European leaders and the European Union.

European leaders reacted furiously after the incident, which led to the arrest of Belarusian opposition activist Roman Protasevich, and which Poland's Prime Minister Mateusz Morawiecki denounced as "an act of state terrorism".

Earlier Sunday, the opposition Telegram channel Nexta said Protasevich, its former editor, was being held in Minsk after his flight had been forced to land on the orders of Belarusian President Alexander Lukashenko.

A statement from Minsk airport said the aircraft had had to make an emergency landing following a bomb scare.

"The plane was checked, no bomb was found and all passengers were sent for another security search," Nexta said. "Among them was... Nexta journalist Roman Protasevich. He was detained."

The Belarusian interior ministry initially confirmed the detention on Telegram, but the post was later deleted.

But the Telegram channel of Lukashenko's press service said the president had given the order to turn the flight around. It added that he had also ordered a Mig-29 fighter jet to accompany the aircraft.

The incident comes as the Belarus authorities intensify their crackdown on the opposition in Belarus following historic protests that gripped the ex-Soviet country after a disputed presidential election last year.

The European Union's foreign policy chief Josep Borrell tweeted: "We hold the government of Belarus responsable for the security of all passengers and the aircraft.

"ALL passengers must be able to continue their travel immediately," he said, implicitly demanding the release of exiled opposition activist Roman Protasevich.

Gitanas Nauseda, the president of Lithuania, where the flight was bound, called the incident an "unprecedented event" and blamed the Belarus regime for the "abhorrent action". 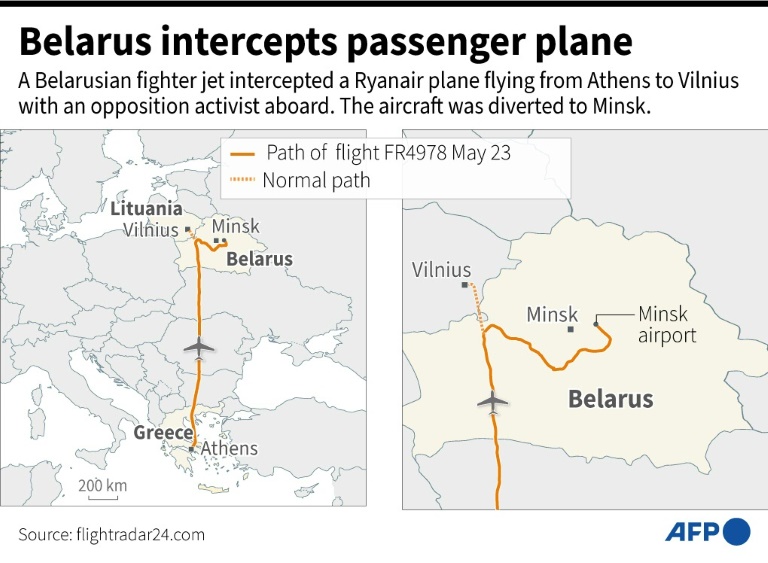 In Greece, where the flight started its journey, Prime Minister Kyriakos Mitsotakis tweeted: "The forced landing of a commercial plane to detain a journalist is an unprecedented, shocking act.

"We demand all passengers' immediate release," he added, calling for EU action to "step up pressure on Belarus. Enough is enough".

Since last August's disputed election result, Belarusians have taken took to the streets demanding the resignation of Lukashenko, who has ruled for over two decades.

In 2020, 26-year old Protasevich and Nexta founder Stepan Putilo, 22, were added to Belarus's list of "individuals involved in terrorist activity". 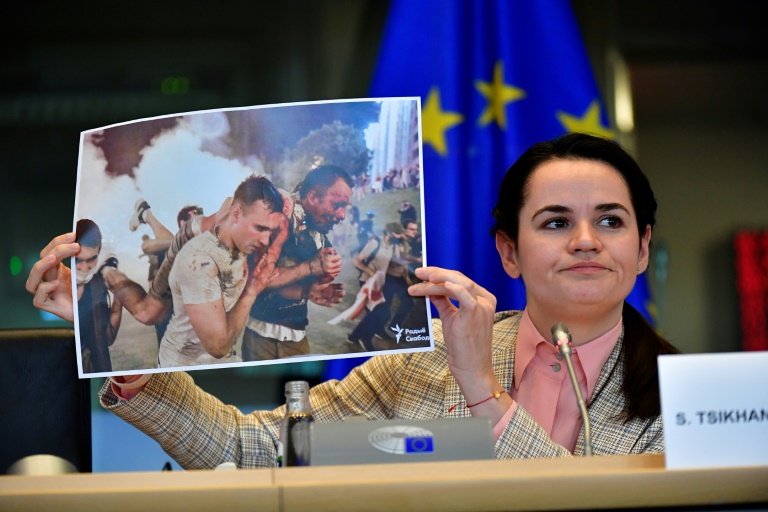 The two bloggers - both now based in Poland - were added to the list based on earlier charges of causing mass unrest, an offence that can lead to up to 15 years of imprisonment.

Belarus had also labelled the Nexta Telegram channels and its logo "extremist" and ordered them blocked.

Nexta Live and its sister channel Nexta - with close to 2 million subscribers on the Telegram messenger - are prominent voices of the Belarus opposition and helped mobilise protesters.

"It is absolutely obvious that this is an operation of secret services to capture the plane in order to detain activist and blogger Roman Protasevich," exiled opposition leader Svetlana Tikhanovskaya said on Telegram.

The opposition says that Tikhanovskaya, who fled to neighbouring Lithuania after the election, was the true winner of last year's presidential vote.

A member of the Nexta team, Tadeusz Giczan, said on Twitter that representatives of the Belarusian security agency were on the flight with Protasevich.

"Then when the plane had entered Belarus airspace, the KGB officers initiated a fight with the Ryanair crew insisting there's an IED onboard," he said.

A spokeswoman for state company "Lithuanian airports", Lina Beisine, told AFP that Minsk airport had said the flight was redirected "due to a conflict between a member of the crew and the passengers".

In a statement, Ryanair said the flight's crew had been notified by Belarus air traffic control of "a potential security threat on board" and were instructed to divert to Minsk, the "nearest" airport.

It made no mention of Protasevich's arrest and said Minsk airport advised it that the flight was due to depart at 19:00 local time (1600 GMT).

Lithuanian Foreign Minister Gabrielius Landsbergis said that there were 171 passengers aboard the flight, most of them Lithuanian nationals.

The European Union and the United States have sanctioned Lukashenko and dozens of officials and businessmen tied to his regime with asset freezes and visa bans.

The historic Belarus protests, which left at least four people dead, have now subsided, but journalists and activists continue to receive prison sentences in the aftermath.