INTERNATIONAL NEWS - After he was struck down by malaria and typhoid, Togolese tailor Ayawo Hievi thought he was set to recover when he started taking drugs prescribed by his doctor.

But far from curing him, the medication he was given at the neighbourhood clinic made him far worse - eventually costing him one of his kidneys.

The drugs were fake.

"After four days of care, there was no improvement, but I started to feel pain in my belly," Hievi, 52, told AFP.

After two weeks of suffering he became unable to walk and was rushed into the university hospital in the West African nation's capital Lome.

"The doctors told me that my kidneys had been damaged... the quinine and the antibiotics used to treat me in the medical office were fake drugs."

Now, over four years later, he remains crippled by chronic kidney failure and has to go to hospital for dialysis regularly.

Hievi's horror story is far from unique in a continent awash with counterfeit medicines.

The World Health Organization (WHO) estimates that every year some 100,000 people across Africa die from taking "falsified or substandard" medication. 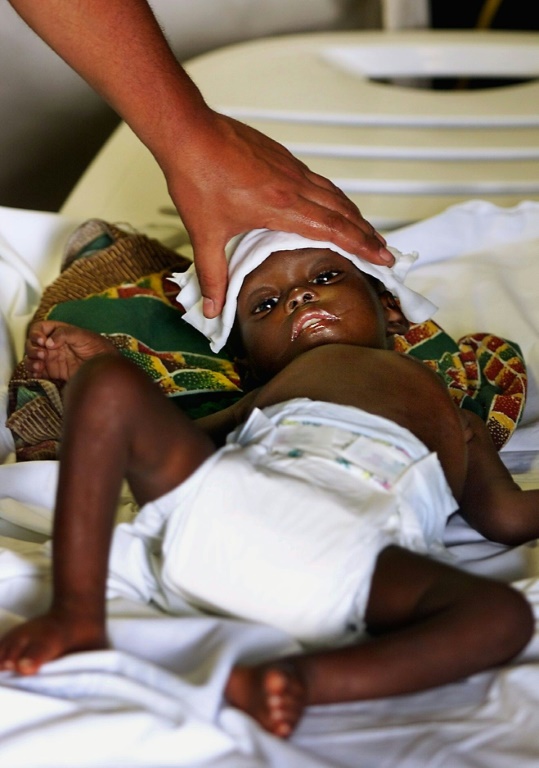 Africa is awash with fake drugs, say experts. Children with malaria are especially at risk.

The American Society of Tropical Medicine and Hygiene estimated in 2015 that 122,000 children under five died due to taking poor quality anti-malaria drugs in sub-Saharan Africa.

Weak legislation, poor healthcare systems and widespread poverty have encouraged the growth of this parallel - and deadly - market. Since 2013, Africa has made up 42 percent of the fake medicine seized worldwide.

The two drugs most likely to be out-of-date or poor, ineffective copies are antibiotics and anti-malarials, say experts.

And bogus drugs not only pose a risk to the patient - they also play a worrying part in building resistance to vital frontline medications.

In a bid to tackle the scourge, presidents from seven countries - the Republic of Congo, Gambia, Ghana, Niger, Senegal, Togo and Uganda - meet Friday in Lome to sign an agreement for criminalising trafficking in fake drugs.

The goal is to bolster cooperation between governments and encourage other African nations to join the initiative.

But even if leaders put pen to paper, the task of stamping out the flows of counterfeit medication is huge.

Medicines spread out on plastic sheets or offered at ramshackle stalls are for sale at markets across West Africa.

Those hawked on the streets are often a fraction of the price of what's available in more reputable pharmacies where controls are stricter and supplies often have to come through official channels.

"It is very difficult to trace where the fake medicines come from," said Dr Innocent Kounde Kpeto, the president of Togo's pharmacist association.

"The countries which are mentioned on the boxes are often not the countries of origin or manufacture of these drugs. The manufacturers cover their tracks so as not to be identified".

It is estimated that between 30 and 60 percent of medicine sold in Africa is fake and Kpeto said most of it comes from China or India.

Efforts to staunch the deadly torrents of counterfeits have made some headway.

Some trafficking hubs have been dismantled, such as Adjegounle market in Cotonou that served as a key gateway for fakes heading to giant neighbour Nigeria.

In mid-November, the police in Ivory Coast made a record seizure of 200 tonnes in Abidjan and arrested four suspects including a Chinese national.

Togo is one of the pioneer countries trying to stop the flow.

But even given these recent successes, those in the industry like Dr Kpeto insist that the threat is still grave and involves "highly organised criminal networks".

"The phenomenon remains major," he said.

The fake medicines are smuggled in the same way as guns or narcotics and often bring higher returns.

Nigeria, Africa's most populous country with a market of 200 million people, is the number one destination on the continent for fake drugs and a showcase of difficulties being faced. 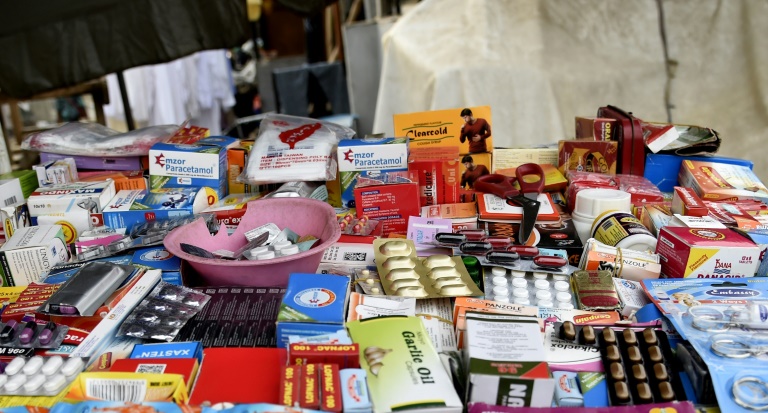 A drugs stall on a street in Lagos. Informal sales outlets are a major channel for counterfeit medicine.

In September 2016 the World Customs Organization seized tens of millions of fake pills and medicines at 16 ports around Africa: 35 percent were intended for Nigeria.

Across the vast nation there are tens of thousands of vendors selling the counterfeits.

Competition between traffickers is fierce and the official agency meant to combat the problem is overwhelmed.

In a bid to improve the situation, Vivian Nwakah founded in 2017 start-up Medsaf and raised $1.4 million to help Nigerians track their medication from producer to user.

"The country doesn't have a reliable and centralised distribution network," she said. 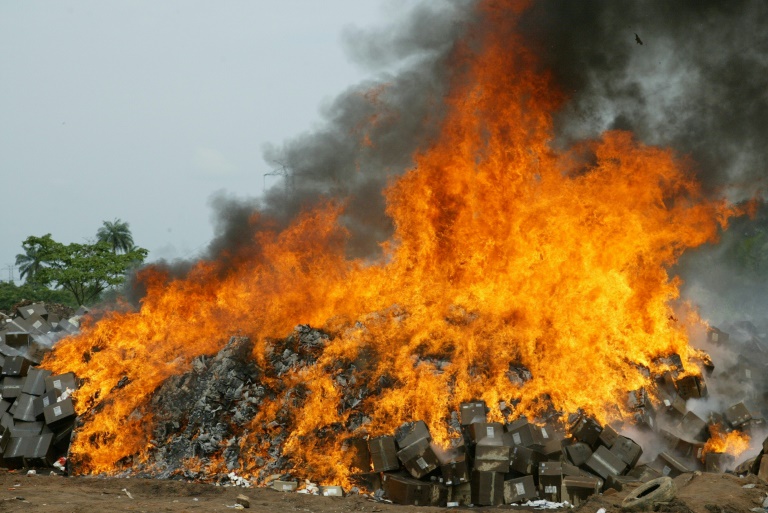 Up in smoke: Fake drugs are destroyed in Ogun State, southwest Nigeria after being seized by watchdogs.

"A hospital sometimes has to deal with 30 or 40 distributors for all the medications it needs. How can you have quality control with so many suppliers?"

As a result, fake or faulty medicine has not just flooded markets but also pharmacies and hospitals - both state and private.

Sometimes, without hospital administrators even being aware, that means the drugs that reach the patients can be expired, poorly stored or the wrong doses.

Medsaf works to ensure the quality control of thousands of products at over 130 hospitals and pharmacies in Nigeria. It looks forward to expanding deeper into Nigeria as well as Ivory Coast and Senegal.

The company uses technology, database management and analytics to monitor the movement of medications and verifies their official registration number, the expiry dates and storage conditions.

"Technology we use can help to solve most of the issues related to fake drugs," Nwakah said. "People die for nothing. We can change that."