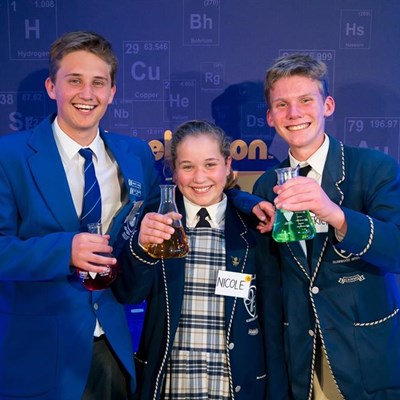 Cheers! The elated George team who took top honours at the genius quiz in Cape Town are from left: Matthew van Helsdingen (York High), Nicole van Helsdingen (Glenwood House Preparatory) and Derick Hill (Glenwood House College).
GEORGE NEWS - The sheer determination of a 12-year-old girl from George, has ensured that she, her brother and a friend took home top honours in the Western Cape regional finals of the Absa Nickelodeon Genius challenge.
A total of 57 of the Western Cape's smartest kids aged 11 to 16 gathered at the Royal Cape Yacht Club in Cape Town to take part in the quiz knockout, designed to test their maths and science know-how to the limit.
After a gruelling two days of quizzes, experiments and problem-solving tasks, Nicole van Helsdingen (12), a grade 6 learner at Glenwood House, her brother Matthew (15), a grade 8 pupil at York High, and Derick Hill (15), in grade 9, also a learner at Glenwood House, made it through to the next leg of the TV quiz show with flying colours.
What makes the George team's success even more impressive and extra special is that this time last year, Nicole was diagnosed with a coarctation of the aorta (aortic narrowing) at George Hospital and has since undergone two heart procedures at Red Cross Memorial Hospital in Cape Town.
Having fought for her life and having won, has made Nicole even more determined to chase her dreams. Born with an enquiring mind, she loves science and maths, solving problems and taking on a challenge.
When she learnt of the Nickelodeon Genius Challenge a few months ago, she immediately entered. She wants to explore the world and travel and saw this competition as the perfect platform to do exactly that.
Nicole's mother, Hendra, says when Nickelodeon phoned her a week before the competition, they had mere days to find two team-mates who are also strong in science and maths. Nicole's older brother Matthew, was a natural choice, and they asked their equally smart friend, Derick, to complete the trio. Derick has won numerous competitions and recently came first countrywide in a Maths Lit Olympiad.
Hendra says they really threw a spanner in the works by entering a team made up of participants from different schools. "Just one other team also featured siblings, but out of the 19 teams attending, ours was the only team joining forces across the school barrier. Our team did George proud!"
An emotional Hendra told George Herald she is absolutely amazed by her daughter's determination.
"To think that in November last year she was in hospital in Cape Town. Less than a year later she is back in the Mother City to show her mettle against the top achievers in the province. And then to come out tops! I am incredibly proud of all three, but Nicole's achievement brings me to tears. We have been incredibly blessed!"
Two Western Province teams will be going through to the finals to be held in Johannesburg in February next year. The other team in the finals are three 16-year-old grade 10 pupils of Curro Durbanville.
Each team has won a R50 000 ABSA MegaU bank account as well as a donation from Cambridge Publishing of R10 000 worth of books for their schools.
Both Nicole and Matthew are musical and intend to spend their winning money on musical instruments while saving the rest for their education. Derick will also save most of the money, but as he loves performing magic tricks, he plans to invest in a really good poker set so he can earn pocket money to supplement his study fund.
The George team will next appear in the Nickelodeon Genius TV game show, where they will square up against teams from all over South Africa. The winners will receive an amazing prize: a R100 000 Absa MegaU account for each member of the winning team and an unforgettable visit to Nasa's Kennedy Space Centre in Florida, USA - where the winners will eat lunch with a real, live astronaut - and enjoy a trip to Universal Studios.
The winning schools will receive books and educational material worth R30 000, courtesy of Cambridge Publishing. Initial highlights of Nickelodeon's Genius regional heats and workshops will air on NickToons (DStv channel 308) from December, and the game show will air from March next year.
For more information on the Genius quiz show, log on to www.nickelodeonafrica.com.
Click here for a photo gallery.
ARTICLE: ILSE SCHOONRAAD, GEORGE HERALD EDITOR
'We bring you the latest George, Garden Route news'