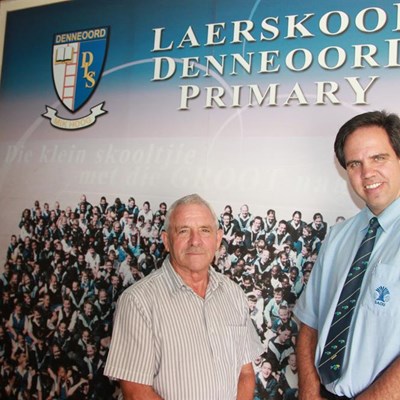 William Ferreira (left) greets Herman du Plessis, headmaster of Denneoord, for the last time on Wednesday 9 December, the last day of the 2015 school year. Photo: Myron Rabinowitz
GEORGE NEWS - William Ferreira, the intermediate phase teacher at Denneoord Primary School, who retired at the end of the school term after 27 years at the school, says he hopes to take up a retirement post at 'Wilderness
Primary' - Wilderness old age home.
"I am going to have a rest but will always be available for my passion of nurturing children, which includes teaching." Ferreira admitted that he never wanted to be known as just a teacher.
"I wanted to be someone who cultivates the positive attributes of children so that they can achieve greatness far beyond their particular position and surroundings as a pupil. I recognised early on in my career that many young people needed a father figure in their lives to help them with life's challenges.
"Herman du Plessis, headmaster of Denneoord, said, "If William never became a teacher he would have been the best psychologist as he focuses on the positive. On the school's disciplinary committee he always draws attention to the positive attributes that every child has and pleads for motivational discipline. He has taught me that your censure must be for the advantage of the child and not so much on dealing with the problem as he maintains that will take care of itself."
Born in Oudtshoorn in 1951, Ferreira completed his schooling at Point High School in Mossel Bay in 1969. In 1972 Ferreira attained his teaching diploma at the Teachers' Training College in Oudtshoorn. As if Oudtshoorn wasn't hot enough, he moved to Hotazel in the Northern Cape where he taught until 1976. Ferreira then taught at Simonsberg and Gene Louw primary schools in Cape Town, and took up a position at Denneoord Primary in 1988.
Ferreira said, "Actually, teaching was in my blood. My father, Casper Ferreira, taught at Herbertsdale Primary for many years and my mum was the hostel mother. I was privileged to be part of a team that built Denneoord Primary from the small school with the big name into the school it is today, the school with the big heart."
Loved by his colleagues and pupils Ferreira has mastered the art of friendship with respect through loyalty and will be missed but never forgotten.
ARTICLE: MYRON RABINOWITZ, GEORGE HERALD JOURNALIST
'We bring you the latest George, Garden Route news'