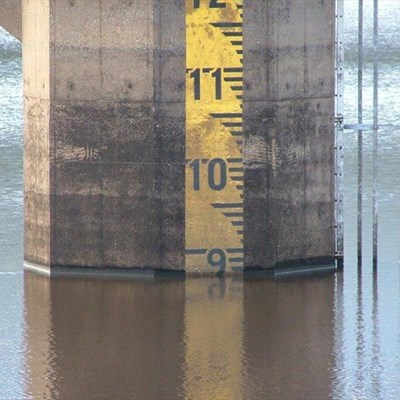 Ken Gie sent in this photo of the level of the Garden Route Dam on 6 October 2009 during a prolonged drought.The measurement is in metre, but this gauge plate is not in use anymore. The Department of Water and Sanitation (DWS) re-surveyed the dam in May 2010 and since July 2010, the new gauge plates installed by DWS are used to determine the dam level. During the previous drought, the lowest dam level reported was on 22 February 2010, at 16,9%, two days before this photo was taken. During thos

GEORGE NEWS - In a press statement released on Monday 11 September, Municipal Communications Chief Chantel Edwards-Klose said that the raising of the Garden Route Dam wall must be completed by 30 June next year.

She said the reconceptualisation of the project, as previously reported in the George Herald, involved a further tender process for consultants, which concluded in January this year.

Following administrative and further legal processes required by the municipal supply chain policy, the tender for the newly designed project was advertised on 7 September and will close on 9 October.

"The supply chain process still requires some prescribed activities which will require several additional weeks prior to the official start of the construction portion of the project, which time cannot be fixed just yet.

"However, it must be noted that this is a long project which must by special effort be completed by 30 June next year. The amount budgeted for this project is R12,8-million," said Edwards-Klose.

The municipality applied for environmental authorisation in 2009 to raise the Garden Route Dam spillway by up to 3m and to install a fuse gate system (FGS) at the point of overflow after it had been determined that, with the hydrology data available then, this was the most favourable solution for increasing the dam's capacity. The environmental approval for the redesign of the method to raise the Garden Route Dam wall has been granted.

"The authorisation for this activity was granted in March 2012. However, the authorised fuse gate alternative was no longer considered to be the most viable option, following a comprehensive review of the catchment hydrology when the Water Affairs permit was issued in December 2014," said Edwards-Klose.

The alternative of constructing a side-channel was investigated to extend the flood overflow length and it was found to be the most effective in raising the dam capacity, while minimising any future damages risks caused by higher order floods, including those with 1:200-year return periods.

For this option, a "duckbill"-shaped concrete spillway wall up to 100m long has to be constructed upstream of the existing spillway, connected to the existing retaining wall.

This design requires the dam wall overflow to be raised by 2,5m and the crest to be raised by 1,8m. This will provide sufficient freeboard to prevent overtopping of the embankment by wave action that may occur during extreme flood events.

The material required to raise the dam wall will be sourced from within the dam.