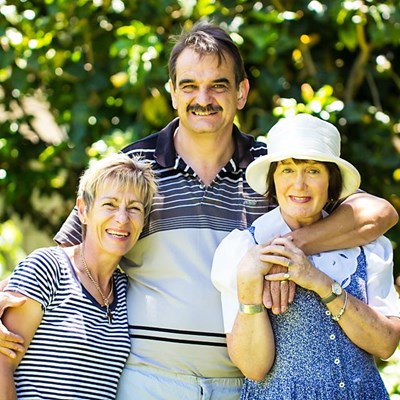 Gaynor Young (right) in high spirits together with B Royce and Chrisjan Botha, whose wife, local photographer Elmine Botha, captured their smiles after the SA Blogging Awards announcement.
GEORGE NEWS - Well-known George resident Gaynor Young is over the moon after her online blog, 'ear'ear, has been selected as the runner-up in the Entertainment/Lifestyle category of the prestigious 2013 South African Blogging Awards.

Gaynor (52), a former actress, says the writing process does not come easy and she was somewhat surprised when her friend, 'B' Royce broke the news to her. Gaynor suffered brain damage during an accident in 1989. She lost her hearing, much of her eyesight and was left spastic on the right side of her body when she fell off a stage - 18m down an unguarded lift shaft - during a performance at the State Theatre in Pretoria.

But this tragedy and resultant physical limitations did not dampen her lively spirit, as is evident from her inspirational blogs in which her brave, humorous approach to life shines through.

Having started blogging less than a year ago, in March 2013, Gaynor is fairly new on the scene. She declares that she would not have ventured to begin if it were not for B's insistence and encouragement.

Gaynor describes in her latest blog that "I am damn proud of myself," after hearing that for the SA Blogging Awards the public gets to vote first for their favourite bloggers. The organi-sers then compile a short list of candidates from the most popular ones, who are then judged by a panel of 20 high-profile people from all walks of life - from the editors of the Cape Times, and Mail & Guardian through to people like celebrity chef Jenny Morris and former Springbok rugby player Chester Williams.

Gaynor says initially she did not believe that people would be interested in her blogs, but B kept on encouraging her and has done some "phenomenal" marketing for the blog. Up to 24 000 people a week are now viewing her blogs. "That is an incredibly large audience," says the pleased blogger, stressing that her other special friend, Chrisjan Botha, "my computer guru," also plays a pivotal role by providing technical assistance. Like Gaynor, Chrisjan and B are deaf.

Gaynor concludes her latest blog saying, "I didn't expect to get so much pleasure from this blog. And surprisingly, I have! My words don't tumble freely out. They are rather excavated from the recesses of this perplexing brain of mine. And the excavation takes a long time. Little by little the words reveal themselves. So what eventually lies before me on the page is…well, yes, is precious to me."