Reports from the different places say that all the fires started early on the Tuesday morning which, suggests that it was not a single fire spreading from west to east in forests, fynbos and farms, but must have been many separate fires. 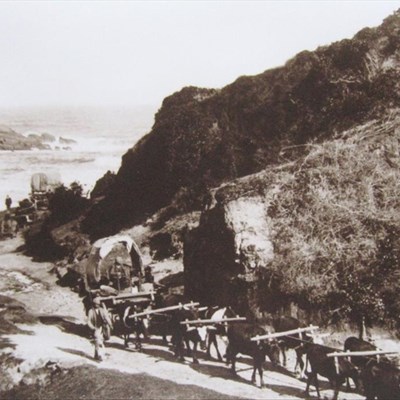 This photo from the archives of the George Museum shows the narrow road to the beach at Victoria Bay in 1905. The road would not have been much different in 1869.

SOUTHERN CAPE NEWS - The latter half of the 1860s brought three major calamities to the Southern Cape.

Nearly every horse in the area succumbed to the sickness which swept down from East Africa in 1866.

The George Divisional Bank, opened in 1860, crashed in January 1869. Many shareholders and prominent men were ruined and declared insolvent.

Then at sunrise on Tuesday, 9 February, 1869, came a 'berg wind', the hottest in living memory.

This 'intensely hot hurricane' raged through an area from Riversdale to Uitenhage and even as far as Port Elizabeth, and fires broke out across a distance of over 450 kilometres and 'it seemed that the world went up in flames'.

Reports from the different places say that all the fires started early on the Tuesday morning which, suggests that it was not a single fire spreading from west to east in forests, fynbos and farms, but must have been many separate fires.

There were also fires which spread from over the mountains towards the coast, all driven by the 'berg wind' which blows from the north or north-west.

DevastationThe devastation was enormous. At least 41 lives were tragically lost in the Tsitsikamma and Humansdorp areas. The pets and the farmers' livestock - poultry, pigs, goats, sheep, cattle, oxen, mules and horses; the bush buck and other game and birds of all sizes, all were horribly burnt to death or overcome by the smoke. Homes, from mansions to labourers' cottages and kraals with huts were destroyed, along with crops, tobacco, fruit trees, cut sheaves and stacks of fodder. There was little or nothing left for those who survived and many were ruined.

Trail of fear and miseryReports of the devastation in the George Advertiser and Grahamstown Journal omitted any details from Riversdale to Albertina. But details came from Gouritz, Mossel Bay and Little Brak River with burnt-out homesteads and huts and crops lost. At Great Brak River nothing was left but a black mass of desolation. All the dwellings of the coloured population living along the river there, with all their crops, were gone.

GeorgeThe town of George got off relatively lightly. There was forest and thick scrub half-way down Caledon Street. The day was one of the hottest ever known in George, and a fearfully hot wind, supposed by some to be a Sahara wind, was blowing strongly. The large double-storey house of John O’Connell and Mr Clarke’s cottage lower down the street were razed by the fire. "Flames fanned by a berg wind were seriously menacing the town. People living in houses with thatched roofs fled for safety to the local gaol, (a large stone building now known as Die Bult/Heatherlands High School).

EvacuationChildren were taken to the outskirts of the town on the Victoria Bay side and every available blanket was requisitioned, soaked in water and spread over the thatched roofs to fend off the sparks which were 'falling like hail'. The wind dropped at about four in the afternoon when Mr George Row, his wife and two children were looking for a cool spot.

They drove in his Cape cart to Victoria Bay, Kraaibosch. Suddenly the bush was burning on both sides of the narrow road near the beach. Scholtz, the cart driver, did not know that the children were safe and went back to the cart thinking the children were still in the cart. The cart was completely destroyed by fire and the horses perished. Scholtz's hands were so severely burnt that he lost the use of them for the rest of his life. The owner of the farm, Michael O’Connell, suffered considerable loss. A Mr Gerber’s house was burnt to the ground at Langvlei and an 'immense amount of forest was burnt between George and Knysna'.

KnysnaMr Brian H Darnell of Westford, Knysna, gave a vivid account: "The wind increased rapidly ... above the smoke I saw the liquid fire pouring over the great wooded krantzes and below them in the fields a great stream of fire surging also in the dry grass with incredible rapidity. I directed my wife ... to fly with (the household) into the garden and into the dam. Instantaneously the whole of the buildings on the place were alight, and at the same time fire appeared all around us. I have lost everything.

At Portland, Mr Henry Barrington’s place, there has been a much greater destruction of accumulated property and sheep but the damage done to the farm is not so considerable. At Barnard’s, Buffels Vermaak, (near Buffels Bay) the farmhouse is burnt down, and some of his money melted which they had unwisely kept in their own chests instead of trusting it to the coffers of the George Bank (the bank was already under provisional liquidation!).

Their silver spoons and forks are also melted down, but the loss these good people feel most, is that of their feather beds."

Across the Knysna River, Mr Sutherland’s farm, Eastford was destroyed. A passenger on the Knysna Belle about 5 miles out at sea could see "a portion of the Knysna point on fire. From the forest to the mouth of the Knysna river, (there was) nothing more than a mass of cinders and ashes. Birds and insects flocked on board to save themselves from the conflagration." Flames could also be seen on Spitzkop on the Prince Alfred’s Pass.

Oudtshoorm areaOver the mountains to Oudtshoorn, Mr Le Roux lost horses, a mule, goats and 488 sheep. The cattle escaped. Another farmer lost his tobacco sheds filled with tobacco. Near Meiringspoort, "homesteads were threatened and people, both white and coloured, were running in all directions with blankets and bundles, and made their way to Oliphant’s River for protection".

Plettenberg BayThe old Government Residency of Messrs Thomson, Watson and Co at Plettenberg Bay was destroyed along with a number of other buildings and the smoke was so dense, one needed to light candles. A large number of buildings were destroyed and except for one general goods store, none were insured. "Heavy columns of smoke, caused by volumes of fires" could be seen over the Tsitsikama forest in the distance.

Clarkson was a Moravian Mission below the mountains in the indigenous forested area of the Tsitsikamma, about 60km from Humansdorp. There, 14 lives were lost, there was a great loss of livestock and 27 houses were destroyed on that terrible day. There was a graphic account: "Resinous odours filled the hot, dry suffocating dust-laden air and a terrible hurricane, that carried with it smoke, fire sparks etc., hurled forth its deadly power.

High overhead flew great sheets of flame, snatched up by the wind and flung from bush to bush while a fiery shower fell, constantly drifting down through the lower foliage.

The sun was a red as fire, and we may say more than one thought the final day of God’s just retribution had arrived. Fire approached the Fingo location below the farm Driefontein of FC Rademeyer and Son, and the Fingo Church at Witte Klein Bush near Clarkson was entirely destroyed.

Mr Rademeyer and many Fingoes worked hard to extinguish the fire, but it then took two directions - one side destroyed his homestead and the other went towards the Kromme River. It was then about 4pm. Mr Kemp and his son and his voorleier, a young boy, all died. Mrs Gertenbach and her servant were burnt to death in their Zuurbrom homestead."

HumansdorpIn the Humansdorp area "the sun rose intensely hot, the air was languid, and no shadow of trees could break the heat and glare of the sun’s rays." Altogether 26 lives were lost and twenty homesteads with livestock and crops were destroyed in the Humansdorp, Gamtoos and Van Stadens area.

There are vivid descriptions of terrified families fleeing from the approaching inferno, in wagons and on foot, through choking smoke and heat. Some tried to save their livestock by immersing them in rivers and dams.

The fire crossed the Gamtoos River and extended practically all the way to Uitenhage, where there was considerable damage and the loss of five lives, and a number of children were seriously burnt. A transport rider on the Port Elizabeth Bay flats saved his life and others with him "by setting fire to the grass round about him, so that when the rolling sea of fire came up to him, he had his wagons safe on the spot already burnt."

CauseThere were a number of theories as to the cause of the catastrophic fire of 1869, but the weather played a major part. A very wet season during mid-1868 promoted a vigorous growth of grass, shrubs and fynbos.

This was followed by drought and high temperatures during the summer. Veld burning had been going on for some time and it had been noted that the custom was widespread and fires were visible for miles at night. In Uitenhage, there was a case of children playing with matches which caused a lot of damage. The temperatures rose and the scorching, hot wind blew at 'hurricane' force, creating tinder dry conditions - a tinder box waiting for a spark. All was in place for the perfect fire - the Great Fire of 1869.

There were less than 3 000 people in the whole of the George District in 1869 (about the same area as the present Eden Municipality), including the village of George, as well as hamlets like Oudtshoorn and farmers living on scattered farms over the rest of the district. Today the population of George alone is about 160 000. Proportionately the loss of life was very much higher with about 50 lost in 1869 compared to 11 deaths in 2017. George as depicted by artist/author JF Victorin in 1854. The tallest buildings from the left were the Catholic Church, St Mark’s Church and the NG (Moederkerk) Church. The lower slopes of George Peak were thickly wooded with indigenous bush and forest. The sketch and painting by Victorin came from a translation of the Swedish edition of his book by JW Grill, JF Victorin’s Travels in the Cape 1854 – 1855.

* Information from the George Advertiser of 1869, reprints of the Grahamstown Journal and reminiscences related in the George and Knysna Herald.

*Article and research by Lynne Thompson, a volunteer working at the George Museum.