ANC Chief Whip Nomawethu Jantjies-Gushman said they are most unhappy with the "mere slap on the wrist" Cronjé received at the council meeting the previous day, Thursday 25 March, when he was charged with one month's salary for breaching the code of conduct for councillors.

This follows the outcome of an investigation into Cronjé's involvement in the Old Mutual Wealth case of 2017. Cronjé was found guilty of breaching the code of conduct for councillors, by not declaring his interest in the matter.

"The sanction was forwarded to Council as a recommendation. The strongest recommendation was that it must be sent to MEC Anton Bredell, and that Cronjé must be removed as a councillor," said Jantjies-Gushman. "We charged the speaker because he did not want this case to continue. He said he found no wrongdoing by Stag."

On a request for comment, municipal spokesperson Chantel Edwards-Klose said neither Pretorius nor Cronjé was aware of any charges laid against them by the ANC. "They have no comment on the matter," she said. Case of fraud
Provincial police spokesperson Capt Malcolm Pojie confirmed that a case of fraud has been opened for investigation that will be conducted by the George detective branch. "We are not obliged to divulge the identity of those being investigated due to the nature of the investigation and based on the fact that no one has been arrested or pleaded in court yet," said Pojie.

"Pending further investigation, the matter will be submitted to the National Prosecuting Authority for scrutiny and to determine whether anyone should be charged or not."

DA Chair of the DA Eastern Region Tertuis Simmers said they take note of the alleged charge(s) that were laid with the George Police.

"All processes of the law must be respected and the tendency to state allegations as facts in advance must not be repeated on social and traditional media as before, especially not by the opposition parties in the George Council and their followers on social media," said Simmers. "Human rights are for all, not just for some in our country." Matter closed
DA Constituency Head of George Geordin Hill-Lewis said the DA is very pleased that the matter is now closed after a very long delay: "The Council disciplinary committee found that Councillor Cronjé did not properly declare his member’s interest. It must be made clear that there was absolutely no finding of corruption by the forensic investigation, by the NPA, the Hawks or the Council disciplinary committee. This matter only related to the declaration of member’s interest to the council and therefore it was decided that a fine would be the most appropriate sanction."

FF Plus Councillor Adv Gert van Niekerk said his party regards the case as an internal DA matter. "It was brought to Council as a confidential item on which a decision was to be taken. The FF Plus did not participate in the debate," he said. 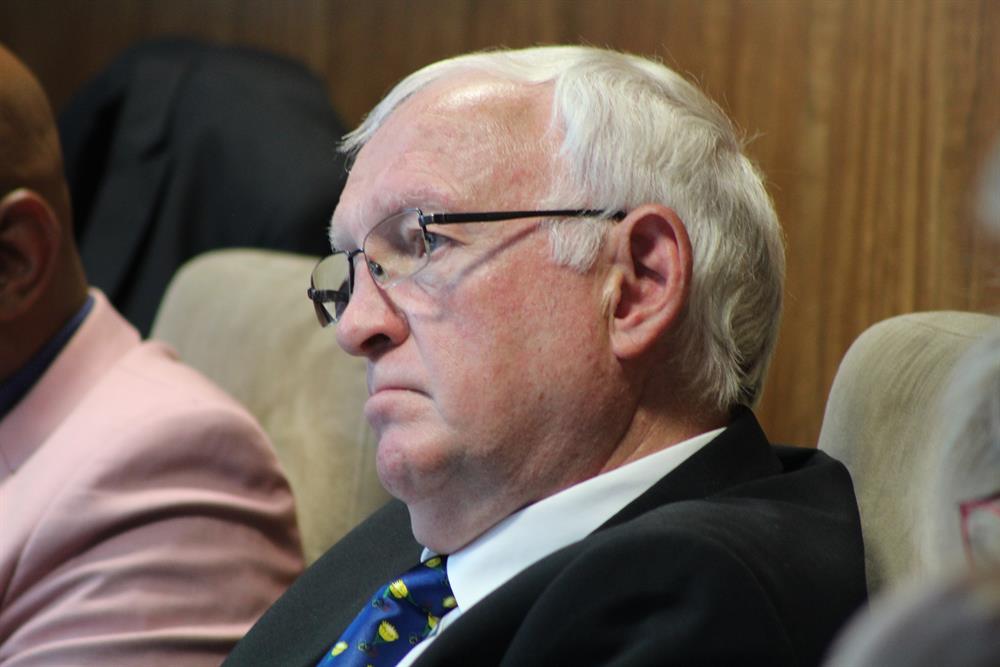 DA Councillor Stag Cronjé has been sanctioned one month's salary for breaching the code of conduct for councillors by not declaring his interest in an investment matter. Photo: Michelle Pienaar

The investment
The case relates to a R350-million investment at Old Mutual Wealth in 2017. The choice of the financial institution came under scrutiny for "not being on the list" of institutions where municipalities may invest money. At the time Stag Cronjé, who held the position as Portfolio Councillor for Finance, faced some heat since his son, a former agent for Old Mutual Broker Distribution, referred the municipality as a possible client to the financial services provider. A referral fee payable to the broker was the bone of contention.

In their sworn affidavits, both Cronjé and his son vehemently object to allegations made against them, as stipulated in a report by FTI Consulting.

About two years ago on 15 July 2019, George Council accepted a recommendation that the municipal manager at the time, Trevor Botha, and any other administrative official who might have been involved in the decision to invest an amount of R350-million at Old Mutual Wealth in 2017, would undergo a forensic investigation.

In addition, a process was to follow to investigate allegations regarding Cronjé's involvement in the matter.

At the same meeting, Council took note of the outcome of Chief Financial Officer Keith Jordaan's disciplinary hearing, in which he was found guilty on three of four charges. Jordaan's dismissal was recommended by the presiding officer. Jordaan evacuated his office on 8 July.