Kef Appels of the anti land invasion unit (left) talks to George councillors at the area below the pump station in Rooirivierrif. Deputy Mayor Charlotte Clarke (middle) expressed concern about the visible signs of a recent sewage spill from a pipe below the station. The issue under discussion, however, was the large volumes of waste left behind by burglars and vagrants who frequent the river course in the Rooirivierrif area. Photos: Pauline Lourens

GEORGE NEWS - Large volumes of waste produced by homeless people in the Camphersdrift river course is cleared daily by George Municipality's anti land invasion crew, who work around the clock to combat this environmental degradation issue.

On Tuesday 28 August, concerned George councillors, law enforcement officers and anti land invasion crew members met at the crossing of the river with Barkhuizen Drive to inspect the area and discuss solutions.

Input was given by role players like Troy Lewis, chairman of the Camphersdrift/Glenbarrie/Heatherlands (CGH) Neighbourhood Watch, and Francois van der Merwe of the George East Crime Spotters. The discussion included concerns over criminals who use the river course as a hiding place and discard unwanted goods looted during burglaries.

Criminals
Lewis and Van der Merwe said during clean-ups held in the green belts of George it was clear that burglars discard their loot there. Personal possessions like passports, ID documents, handbags and purses as well as used needles from drug addicts point at the nefarious activities that take place in a number of locations. Environmental activist Liana Petiffer said harbourless people are treated with great circumspection, but when clean-ups are held between suburbs, the vagrants merely settle elsewhere in town.

Social housing scheme
At Tuesday's meeting, Councillor Cecil Noble said the new social housing scheme in Pacaltsdorp Erf 325 should bring some sort of relief to the squatting problem. It was said that the George City Council is in discussion with provincial government to acquire the York Hostel for Council's own use. Furthermore, Council has approved the establishment of a shelter for the homeless close to the railway station to be operated by the charity Cremhog, whose application is currently being considered by the building control and town planning departments.

Empathy
The concern of residents of Camphersdrift, Rooirivierrif and Heatherlands was voiced: "Whilst we all have empathy with the vulnerable homeless people, one cannot help but wonder if their rights outweigh the those of the ordinary taxpayer who shoulders the tax burden for keeping a crime-free, clean, disease-free environment, where one does not have to live in fear of either having your home raided or burnt down through illegal occupation." 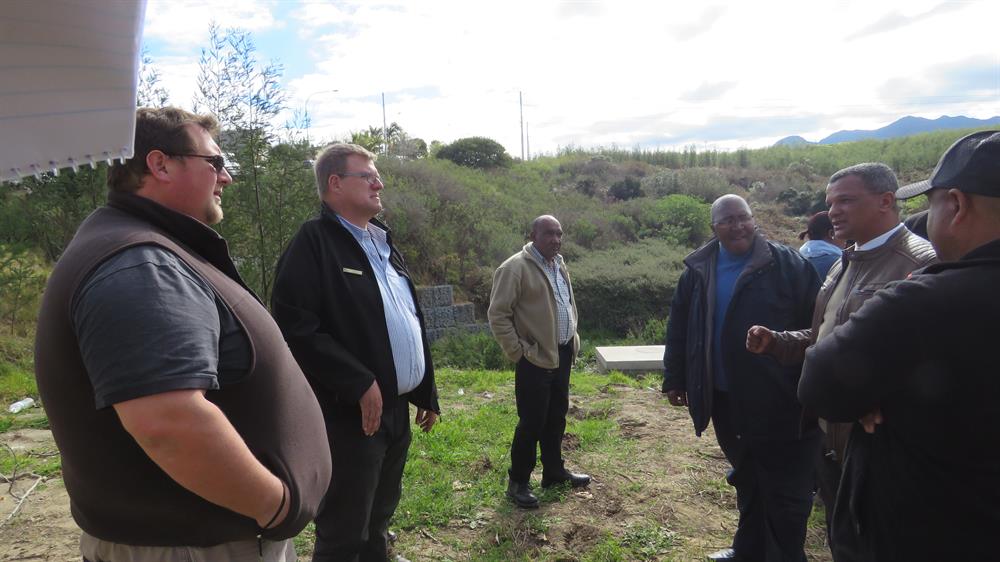 Den of iniquity
It was mentioned that one of the biggest crime hotspots is the area surrounding the old magistrate's house in Davidson Road (en route to the George Hospital), where illegal squatters have set up camp. There has been suspicion for many years that someone is selling drugs in an outbuilding on the property. The police is aware of this, but refrains from infringing on this person's rights as he claims to be a descendant of the gardener who worked for the original homeowner.

A senior police official confirmed this last year when the George Herald wrote an article on the possible use of the building as a firearm licensing office. The police's response to questions on this matter is still being awaited.

Tons of waste removed
Speaking about how problematic it was to clean the Hawthorndene Hotel after a decade of illegal occupation, the new owner Andries Troskie earlier said he had to have five tons of human waste and refuse removed before he could start renovations on the historic hotel.

"I calculated that if every person produces one bag of refuse a day, this eventually amounts to tons of waste. Simply ignoring the problem or passing the buck in the case of Witfontein Forest is not going to make the problem go away." Neighbourhood Watch chairman Troy Lewis and Cllr Sean Snyman, who wants a hiking trail through the green belts of George, survey the Rooirivier course. A shopping trolley and bedding left behind by homeless people are examples of items that have to be cleared on a daily basis.

Question: Has the George Municipality or Town Council changed their policy with regard to illegal land occupation - in other words, is there a relaxation of rules so as to accommodate the rights of the homeless?

Answer: The municipal policy and the applicable legislation with regard to illegal land invasions have not been amended. It must be noted that homeless persons lead a nomadic lifestyle erecting makeshift shelters and moving from place to place. They do not erect permanent wooden or other structures and therefore the PIE Act (Prevention of Illegal Eviction from and Unlawful Occupation of Land Act of 1998) is not applicable when dealing with homeless persons.

Question: A new relocation permit system was apparently introduced. Anyone involved in combating illegal land occupation has to apply for this. What does the relocation permit entail and does this slow down the process of removing people that are illegally occupying vacant land/open spaces and state forests?

Answer: No such permit is applicable. Should action be taken in terms of the PIE Act, an eviction order would be obtained by the George Municipality if the land invasion occurred on municipal land. Again, please note that in the instance of the moving/removal of homeless persons the PIE Act is not applicable.

Question: Which authority is responsible for arresting people on suspicion of housebreaking? Do the George Municipality's law enforcement officers have the right to detain people? Are officials able to exercise any such rights, seeing that they do not carry firearms themselves? This would make the whole crime combating operation rather tricky for such officers who have to go unarmed into a potentially tense situation?

Answer: The George municipal law enforcement officers address by-law infringements on municipal land and not on private property. Enforcement with regard to criminal activities remains the responsibility of the South African Police Services.

Question: Whose responsibility is the squatting problem in the Witfontein Plantation? Neither Daff (Department of Agriculture, Forestry and Fisheries) nor the George police seem to want to shoulder this responsibility? A camp in Daff's Witfontein pine plantation remains a football between the parties.

Answer: The municipality is not allowed to act on land (referring to control of land) which is not in its ownership. As the landowner is the competent authority in terms of the relevant legislation, the onus is on them to use their resources and take the necessary steps required to address the problem. The police indicated that Daff would have to employ a private security company to remove the squatters in Witfontein.