Vinpro has approached the Cape High Court in an effort to obtain urgent interim relief for the wine industry from the ban on alcohol sales.

GARDEN ROUTE NEWS - The reduction in the number of Covid infections in the Garden Route is a clear demonstration that the current hotspot declaration of the area should be lifted, says Human Settlements Minister Tertuis Simmers, lead for the Garden Route's response to Covid-19.

Simmers is calling for an urgent repeal of the hotspot declaration. He says the people of the Garden Route have shown that they are adhering to all the regulations.

Western Cape Premier Alan Winde said in a digital conference yesterday (27 January) he has written to President Cyril Ramaphosa to request the relaxation of some of the restrictions around the sale alcohol, the curfew and the opening of beaches in the province.

"Earlier this week, tourism data revealed that major attractions in the province had seen significant declines in visitors over the peak December period. We must ensure that we protect those agri-workers, drivers, waiters, hotel staff, tour guides retail staff and their families who rely on their jobs in these industries to feed themselves and their families," said Winde.

Vinpro seeks relief through court
Vinpro has approached the Cape High Court in an effort to obtain urgent interim relief for the wine industry from the ban on alcohol sales.

This current ban is the third to be instituted since the Covid-19 outbreak and was introduced on 28 December last year. Vinpro says it finds itself in a "dire" position after a ban of 19 weeks since March 2020.

"This resulted in a loss of more than R8 billion in direct sales and the possible closure of cellars and producers, threatening 27 000 jobs and putting the most vulnerable in our communities in a poverty trap which will have far reaching socio-economic outcomes that will place an even greater strain on our healthcare system."

While the 2021 harvest is starting this week, the industry has more than 640 million litres of stock of which 300 million is uncontracted. "This poses a material risk of insufficient processing and storage capacity for the new harvest and threatens the sustainability of the wine industry." 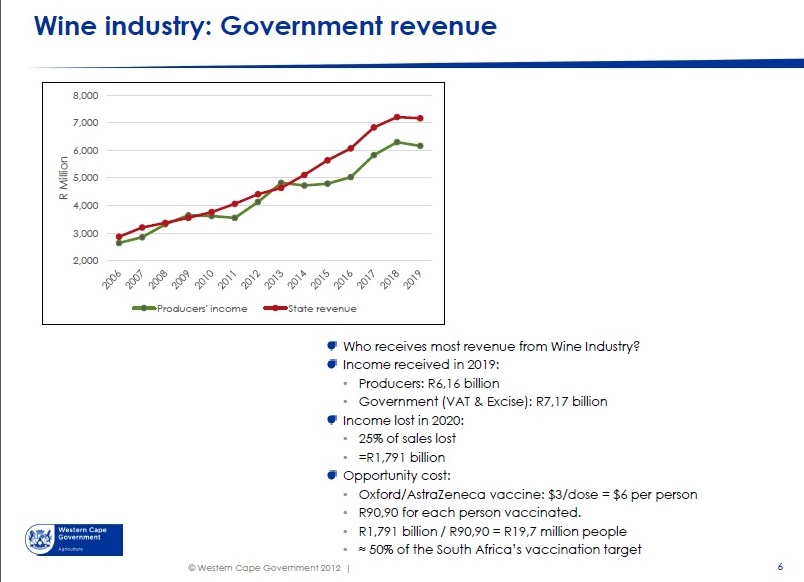 Revenue created by the wine industry according to the Department of Agriculture.

During Winde's digital conference yesterday, Dr Dirk Troskie, director of business planning and strategy at the Department of Agriculture, presented data on the impact of the alcohol ban.

According to the department, wine grapes make up 50.3% of the 181 233 hectares of long-term crop production in the Western Cape. Wine is also the third biggest Western Cape export product, making up 6.5% of provincial exports.

However, only 50% of the province's wines is actually exported, and the remaining 50% is sold in South Africa - on wine farms, at retail outlets and at restaurants and bars. Hundreds of thousands of jobs are created in the system between the vine until the time it reaches the South African consumer - in agriculture, bottling, transport, wine sales, retail, and in tourism and hospitality.