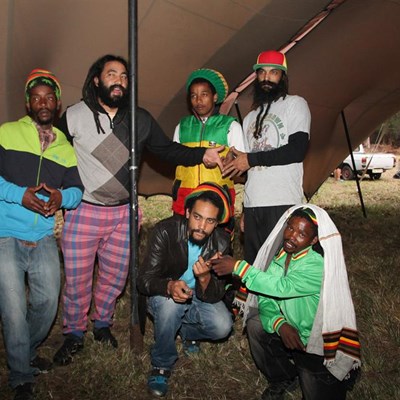 People at the festival. Photo: Myron Rabinowitz
GEORGE NEWS - A Rastafarian cultural event hosted by the Outeniqualand Indigenous Peoples' Forum at the weekend to celebrate Africa Day was too noisy for some Blanco residents.
The festival, 'Reggae on the River', was held on the riverbank near the Malgas low water bridge in the Montagu Pass from Friday till about 22:00 on Sunday night. George Police allegedly received about 30 calls from residents whose sleep was disturbed until the early hours of the morning of Saturday and Sunday.
Kobus van Staden complains in a letter that they were woken by a "deafening" noise, first during Friday night and again on Saturday night when "the whole episode was repeated with new power and volume, with perpetuating drums and chanting" and "noise penetrating every nerve".
When he phoned the police at 02:30 on Sunday morning, he was told that he was about the 30th complainant, but the police could not do anything since the event had been approved by council.
"Does council have so much power that their own bylaws with regard to peace disturbance may be transgressed? Can they dictate to our law enforcement officers where they are allowed to act? Surely it cannot be simply shrugged off - somebody has to be responsible," says an irate Van Staden.
Des Carolus, a member of the Blanco ward committee, was woken by the noise after 23:00 on Saturday night after going to bed early. When the noise had not subsided by 03:40, he reported it to the police but says their response was unsatisfactory and he went to investigate himself. He lives about 1km from the site of the festivities.
"There were about 50 people at the festival. Why did the whole Blanco have to suffer? People also phoned me to complain about the noise."
No apology
Speaking on behalf of the Indigenous Peoples' Forum, Aldred Kaffoen, who is also a member of the Blanco ward committee, says that they obtained all the required approvals from the re-levant authorities.
"We were outside the town. The nearest residents at Step-A-Side and the hop farm were informed beforehand. I am not going to apologise for holding an event that celebrates our indigenous culture. We are not the incomers. This area is our heritage, and we celebrate it only once a year."
He said the festival drew about 200 people every day.
Chantel Edwards-Klose, George Municipality media liaison officer, says the required population certificate (which dictates the maximum number of festival-goers) was issued and this, together with a contingency plan, was handed to the police who did a risk analysis after visiting the site.
According to Sergeant Riëtte Esterhuyse, George Police communication officer, the event was categorised as a music festival with a low risk as there was no threat to the community and/or property involved.
"However, we received a number of complaints from residents regarding extreme music volumes. The organisers of the event were requested to turn down the volume, but seemingly turned it up again."
She promises that they will liaise with all relevant authorities (Eden and George municipalities) to seek a solution and to consider revisiting certain bylaws that can assist the police and municipal law enforcement to address such matters more successfully.
ARTICLE: ALIDA DE BEER, GEORGE HERALD JOURNALIST.
'We bring you the latest George, Garden Route news'