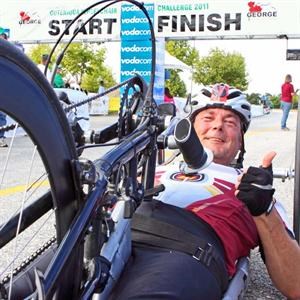 Stuart McCreadie (Maties Helderberg Club) took the winner’s podium with a new course record of 1:10:02 when he won the handcycle division in the men’s open paraplegic 42.2km division. McCreadie, who has only been racing for four years, broke Canadian, Rico Morneau’s previous record with three minutes to spare, averaging a speed of 40km/h.
McCreadie said after the race, "I am very proud to be the winner here today. The course was safe as always and it was a well organised event. I trained hard and expected good results from myself. I want to congratulate the organisers for an outstanding event and hope to be back next year to defend my title."

Mark Rohan from Ireland took first place in the men’s open quadriplegic 42.2km division with a time of 1:28:50.
South Africa’s Paralympic hero, Ernst van Dyk, won the 42.2km Open T53/54 division in a time of 1:43:25 and with that stepped down from the OCC in his racing wheelchair. "This is my last race with the racer. I will participate next year in the handcycle division," he said.

In the women’s marathon open T53/54, Nikki Emerson of England took the ho-nours for the second year running in a time of 02:27:38.

The event offered a prize purse of R244 000 split into 42 categories over three distances - a 42.2km full marathon (with a R10 000 first prize), a 21.1km half-marathon for athletes using racing wheelchairs or handcycles, and a 10km distance, which also allowed basketball chairs and ordinary wheelchairs. It is the only international wheelchair road racing sporting event in South Africa for persons with disabilities, and is recognised as an official championship event by the SA Sports Association for the Physically Disabled (SASAPD).

The fun run, in which young and old were pushed in their wheelchairs by a helper, attracted sports enthusiasts from all ages across the country. The youngest competitor was Veronique Pietersen (two and a half year old) from George, and the oldest was 90-year-old Athol Brown from Fleur de Lis Old Age Home in Franschhoek.

Event director, Esther Watson, was extremely pleased with the results of the day. "George is 200 years old this year, and for the first time in nearly five years, two South Africans took the titles in the OCC in the men’s marathon, both for racing wheelchairs and handcycles. The cherry on top is the new course record set by a South African! When I stand on the finish line and see all the athletes come in safely, the first thing I do is to look up and say thank you for the privilege of being given the energy to once again, with my team of dedicated ladies, arrange the event that brings so much joy to old and young."

Details of all the winners are posted on the OCC website, www.georgeocc.co.za.