A recent a press release from Meyer's office states that the transporting of farm workers on open trucks poses a significant threat to the safety of workers.

Dr Ivan Meyer (back) and Dekker Esterhuyse during a recent inspection of agri worker transport on Applethwaite Farm in Elgin.

GARDEN ROUTE NEWS - Western Cape Minister of the Department of Agriculture, Dr Ivan Meyer, has started a process to address the often dangerous conditions in which farm workers are transported.

Meyer has requested the Western Cape Parliament's standing committee on Agriculture, Environmental Affairs and Planning to look into the matter after recent road accidents involving farm workers in the province.

In the past George Herald has also reported on accidents in our area involving farm workers. The most recent accident was in 2017 and involved 70 workers transported on a truck on the Geelhoutboom Road. The accident occurred when the driver of the truck allegedly attempted to avoid a head-on collision.

The committee resolved to support Agri Western Cape and the Western Cape Department of Agriculture's recommendation that no more than 50% of the licensed capacity of vehicles transporting farm workers is exceeded, and that all directions regarding hygienic conditions and the limitation of exposure to persons with Covid-19 are adhered to by all concerned.

According to Jandré Bakker, the head of communications of the Western Cape Department of Transport and Public Works, there are gaps in the legislation that provincial government is asking the national minister to change. One of these is that there is no law that determines the number of people to be loaded on the back of a bakkie or a truck. 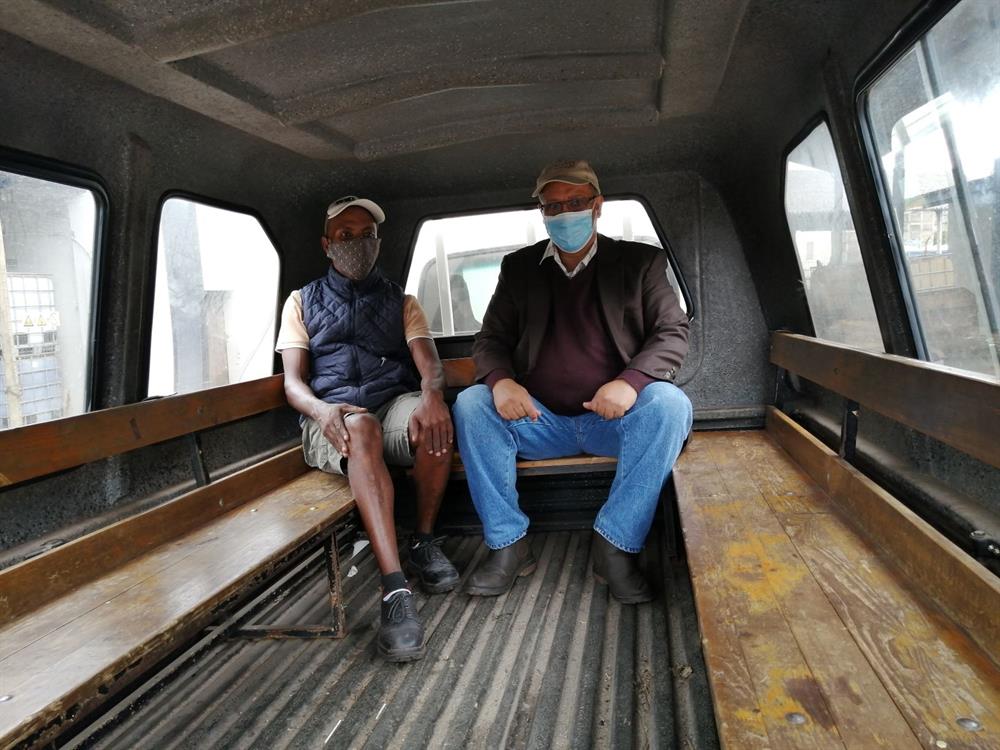 Dr Ivan Meyer (right) and farm worker George Hugo inside a vehicle fitted with seats on the Applethwaite Farm in Elgin.

A recent a press release from Meyer's office states that the transporting of farm workers on open trucks poses a significant threat to the safety of workers.

"The only way to determine whether a truck is overloaded is by weighing it at the weighbridge," said Meyer's spokesperson, Daniel Johnson.

"Doing so is also a challenge as body weight differs from the goods load usually transported by heavy vehicles. Therefore, the National Minister of Transport should amend current Regulation 247 of the National Transport Regulations accordingly, and I will be raising this with my counterpart."

He says that he and Bongikosi Madikizela agree that the safe, dignified transport of workers is a priority for the Western Cape Government.

For this reason, the Western Cape Department of Agriculture's Technical Committee on Rural Safety will also be considering making worker transport a focus area of its rural safety plan.