Looking up: a downward trend

Covid-19 in the Garden Route.

GARDEN ROUTE NEWS - A downward trend in the number of active positive Covid-19 cases in all the Garden Route hotspots - George, Mossel Bay, Knysna and Plettenberg Bay - promises some relief. On the other hand, figures in the Overberg, Cape Winelands and Cape Metro have started to climb.

"They are following our trend," said head of Disaster Management Gerhard Otto yesterday, 22 December, shortly after a meeting with the provincial joint operational centre (Prov Joc).

"At our meeting this morning we were informed that the Western Cape Cabinet will meet with the national Minister of Health to discuss any further actions that would be required to slow down the spread of the Covid-19 virus as many parts of the Western Cape now show a sharp increase in new cases reported," said Otto. 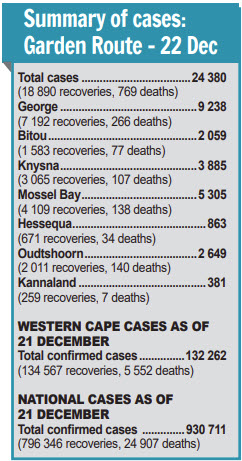 On the hospital front, the availability of beds in intensive care units is looking up. Otto said special action plans were implemented and it seems the area is in a better position than at the end of last week.

Otto was concerned last Friday, saying holidaymakers were on their way to the Southern Cape and there might be problems with the availability of hospital beds for emergencies such as car accidents.

By yesterday morning Otto had received no feedback on an earlier request to deploy the South African National Defence Force in the Garden Route. The idea was that the military would help ensure that the public adhered to Covid-19 regulations, assisting with patrols and at roadblocks.

In addition, feedback from President Cyril Ramaphosa is still awaited on the latest ban on visiting beaches in the Garden Route. The DA has meanwhile approached the courts for help and the case was heard in the Western Cape High Court on Monday 21 December. "The court's ruling will probably be made public by Wednesday, 23 December," said Otto.

At the Prov Joc meeting yesterday, the Department of Education said although food hampers were delivered to all the rural schools, they did have some challenges at urban schools. "The schools that could not be reached before they closed will be dealt with early in January 2021," said Otto.

The Department of Social Development informed the meeting that R6,6-million had been approved to assist community kitchens. Their offices will forward their planning in this regard to all heads of disaster centres.

A new variant of Covid-19 has recently been identified by South African genomics scientists of the KwaZulu-Natal Research Innovation and Sequencing Platform (Krisp). According to study results, the new strain is not deadlier, but might be transmitted more easily.

The variant was first identified in Nelson Mandela Bay but has rapidly spread through the rest of the Eastern Cape and to the Western Cape and KwaZulu-Natal provinces, said Premier Alan Winde in a statement on Monday.

"Presently, there is no clear evidence of the new variant being associated with more severe disease. Further, the national Department of Health has advised that the new variant in South Africa is not the same variant affecting London. However, there are similarities as both share the same change in the spike protein," said Winde.

"There is some evidence that the new variant might be transmitted more easily than other variants, although this requires further study. Officials from the national Department of Health, along with scientists, are studying it more closely."

Symptoms of the new strain are unlikely to differ from known symptoms. There is no indication yet as to its origin.