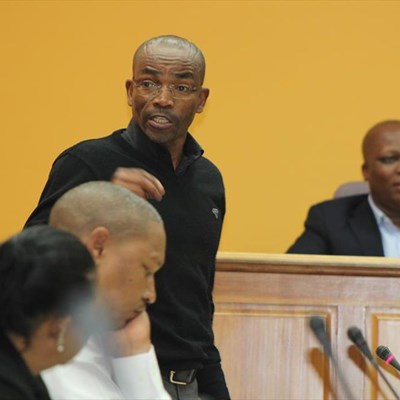 Eden Mayor Memory Booysen informs council of his take on the new regional landfill site during a Special Council Meeting on Monday. At the back (right) is Eden Municipal Manager Monde Stratu.

EDEN NEWS - A year from now, on 31 July 2018, Petro SA will close the current landfill site and no municipality in Eden will be able to dispose of their waste.

This information was shared at a Special Council Meeting at the Eden District Municipality on Monday 31 July, where the final draft of the District Waste Management Policy and By-Law was approved by council. Municipal Manager Monde Stratu said B-municipalities (George, Mossel Bay, Knysna, Bitou) were warned about the cost of waste management. "Mossel Bay and George did not budget for the new landfill site as they should have," said Stratu.

According to Stratu, Petro SA voiced their concern in a meeting last week over "negative publicity" regarding the new regional landfill. "They (Petro SA) are not in the business of doing waste management for us. They are doing us a favour. If we continue with negative publicity which impacts on them they will just close their gates. We have shared this information with our local municipalities."

At this stage, none of the four participating municipalities have paid any funds to Eden District Municipality for the construction and operation of the regional landfill facility. The proposed facility will only be operational at the commencement of the 2018/2019 financial year and the participating municipalities have been informed to make provision for their proportional cost in their multi-year budgets.

The consulting engineers, WorleyParsons, was appointed by Eden Council as the transaction advisors for the project.

George Municipal Manager Trevor Botha said the George Municipality has stated its objections to the exorbitant costs of the regional landfill facility from the outset.

"Initially the projected cost was affordable and more in line with the current costs related to refuse removal. However, when the tender amounts for the Landfill Facility finally were announced, the situation had changed drastically in terms of available budgets," said Botha.

"The George Municipality is in favour of the landfill facility because we do not have an alternative site for refuse dumping. However, we reiterate that more efforts must be engaged to facilitate the doing away with refuse by means of recycling, composting of green waste, investigations into waste to energy projects and such."

During the Municipal Managers' Forum and the District Council Forum meetings held on 5 July, the mayors and municipal managers of all four municipalities reiterated the urgency of the establishment of the proposed regional facility.

Eden Mayor Memory Booysen said Eden needs to take the lead. "Leaders lead during good and bad times," said Booysen. "The problem with the Bs (B-municipalities) is they only want to take good news to the people."

"We won't allow the Bs to go and drop there if they haven't paid. They are going to pay us first before they drop off their rubbish. Please go and tell them. I am going to be the baddest mayor in the district. The other mayors are not going to like me. So be it. Because in the end of the day, if the rubbish is dumped in the street, none of the other mayors will be asked to respond. It will be Eden councillors who will need to respond."

'We bring you the latest Eden, Garden Route news'