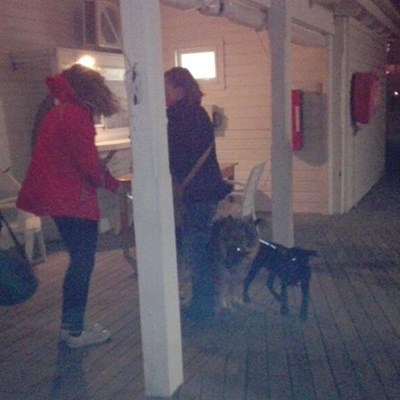 Fire victims seeking shelter at the yacht club. Photo: Stefan Goosen.
KNYSNA NEWS & VIDEO - People from Belvedere, Brenton-on-Sea and Knysna Heights have evacuated their homes and are gathering at Knysna Yacht Club.
According to Knysna-Plett Herald editor, Elaine King, who also had to evacuate her home, there are more than 100 people seeking shelter at the yacht club and more are streaming in.
"As more people arrive the fire keeps raging on. We are surrounded by very scared people, cats and dogs. The hill across the estuary is on fire and flames are spreading towards town from Knysna Heights."
"Large parts of town is without electricity and no traffic lights are working. Due to the police and all emergency personnel out trying to fight the fires, no information is available except from what we can gather from people at the yacht club," she said.
Knysna is coverd in smoke and ash.
Thesen Island Homes have opened their doors to people seeking shelter. They have enough accommodation for 30 people. Victims of the fire can contact them on 082 450 6917.
Remia Eksteen, a resident of Thesen Island, also opened her doors to victims of the fire. She can be contacted on 082 652 0296.
See below a release by the Eden District Municipality:
Currently the fires in and around Knysna are still burning out of control, fanned by gale force North Westerly winds; ground teams have been struggling to contain the fires.

Many houses in the Phantom Pass to Rheenendal area burnt and 4 lives have been lost, 3 directly due to the current fire and one due to a heart attack, presumably agitated by the current conditions in the area.

The fire jumped the N2 near the Buffelsbaai turn-off, leading to the closure of the N2 at this point. The section near Kruisfontein, outside Knysna, on-route to Plettenberg Bay, still remain closed but in this section the fire has been brought under control

Confirmation has been received in terms of the following assistance, currently being dispatched from throughout the Province to assist in Knysna:
Due to the fires all telephone communication to the Knysna Municipality has been lost, some areas are experiencing power outages as well.

Belvedere and the Western Heads are being evacuated, areas close to Brenton-on-Sea has been evacuated to the beach.

The elderly are being evacuated to the Mont Old age home and the Chris Hani community Hall in Dam se Bos is used to accommodate evacuated people.

Fire is out of control and there are still houses in danger an unidentified number of houses have been lost. Fire Chief, Clinton Manual, has requested help from Eden, people have also been evacuated from the area.

Kruisfontein fire (Knysna)-Knysna fire and rescue deployed at this fire

Manual has reported that the fire is totally out of control, the N2 remains closed and an unidentified number of houses have been lost in the fire and some houses are still in danger-people have been evacuated.
Watch a video below:
Click here for previous articles:
More information to follow as it becomes available.
'We bring you the latest Knysna, Garden Route news'