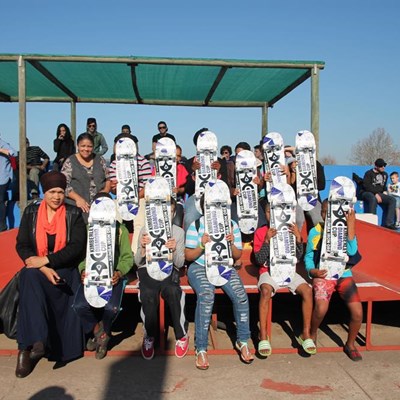 Javigga Natan (front, left) and Cathy Apollis (back, left) with the Môreson children showing off their new skateboards at the Skateboarding for Hope clinic.
GEORGE NEWS - Ten children from the ACVV's Môreson Kinderhuis in Denneoord had an experience of a lifetime on Saturday 4 July when they attended a skateboard clinic at Skatelab in York Street as guests of Skateboarding for Hope.
The Skateboarding for Hope community outreach programme, presented by VANS, was held under the auspices of the National Skateboarding Association (NSA).
The Skateboarding for Hope initiative was launched by the Northern Cape provincial government to offer South African youth the opportunity to challenge themselves mentally and physically.
The programme presents local youngsters with a healthy, affordable and accessible lifestyle alternative and the chance to become part of the fastest growing sport in the country.
The day's action included skateboarding clinics, demos, best trick competitions with cash prizes and skateboarding merchandise up for grabs. Expert skateboarders conducted training sessions and showed the novice skateboarders the basic moves.
Byron Rhoda (22), a competitor who travelled to George from Cape Town to compete in the 2015 Kimberley Diamond Cup skateboarding George leg, said the highlight of his visit was to be part of the skateboard clinic.
Marius de Kock, also from Cape Town and a judge for the competition, said that the skateboard clinic is paying dividends.
"This is the third year that I am involved and can clearly see that these kids have been on their friends' skateboards since last year. Most of them only need some polishing up."
The children, under the supervision of Cathy Apollis (child and youth care worker) and Javigga Natan (social auxiliary worker student from Huguenot College), said that last year those who attended said it was great fun and this year's group was so pleased when they were told that they would be going.
"It is great to be here. For the last year I have been on someone else's skateboard, now I have my own and they have shown me some clever moves. Everyone is so helpful and we really feel at home here," said one of the children.
The 2015 Kimberley Diamond Cup skateboarding world championships, presented by Kumba Iron Ore, a business unit of Anglo American, will be hosted at the Kumba Skate Plaza in Kimberley from 7 to 10 October. For a detailed schedule of events visit www.kimberleydiamondcup.com.
Click here for a previous article.
Marius de Kock encourages one of the novices.
Byron Rhoda shows one of the girls from Môreson a move. Photos: Myron Rabinowitz
ARTICLE: MYRON RABINOWITZ, GEORGE HERALD - JOURNALIST.
'We bring you the latest George, Garden Route news'