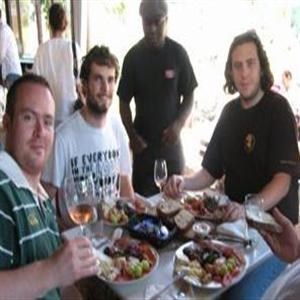 The students are travelling around the Western Cape as part of an academic tour. Having stopped off at the Stellenbosch farmers market and visited Guguletu township in the Cape, they made their way up the Garden Route for a bread and pastry workshop at ile de pain in Knysna and an informative afternoon at Timberlake near Wilderness.
After the students had arrived, Professor Raymond Auerbach from the Nelson Mandela Metropolitan University presented a short lecture on the state of organic agriculture in South Africa within the context of world markets, and the decline of food quality caused by conventional agriculture.

What was most encouraging, was to learn of the large number of small organic projects and co-ops that are getting started all over South Africa. It also became evident that as the oil price rises, it is becoming increasingly difficult to farm with conventional fertilizer and still be profitable (fertilizer has increased more than 300% in price in the last two years) and that this may the be the stimulus for more farmers to go organic.

Local cheesemaker Aidan Pomario then gave a short talk about how he became a cheese maker, his cheesery and a day in the life on his farm in Diep Rivier.

Moving through to Cafe d'Afrique, the students were treated to a wine tasting of four Jakkalsvlei wines by Nikki Schaafsma-Harris from the Oak Barrel. It was then time to enjoy Cafe d'Afrique’s cheese and cold cut meat platters with fresh fruits and raw organic spreads. The platters featured only locally sourced ingredients: Aidan's Chevin cheeses; coppa, salami, pancetta and mozzarella by local Italian producer Dario Soresi; Kudu and Springbok biltong; sweet melon, watermelon and spanspek from the Langkloof; homemade organic red pepper salsa and organic hummus and stoneground french style bread.
"The platters were a great showcase for our local producers and the students were impressed with the quality of the produce," said one of the hosts, Tevon Thom. The lunch was finished off with tasters of Aidans award-winning baked cheesecake and a steaming hot espresso.

One of the students explained that there was no such thing as cheesecake in Italy, as they happily asked for a second helping.
Charles Wolinsky, the team leader and a chairperson of the university, had this to say about the Garden Route: "These culinary trips are an essential part of our students' course of study and we would like to express our sincere gratitude for the generous support and hard work of all the collaborators on the Garden Route in making this year's academic trip to South Africa such a success."
Posted on: 12:39 Tue, 01 March 2011