Have your say: Dam's spillway amendment 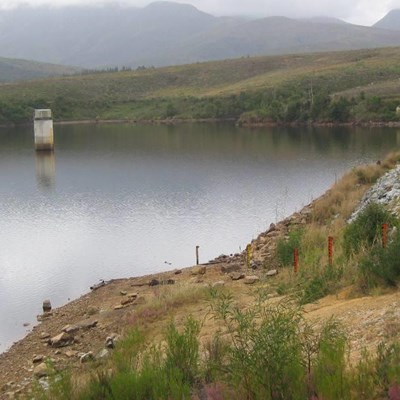 Garden Route Dam.
GEORGE NEWS - A design review of the previously authorised Garden Route Dam wall raising project, aimed at increasing the water storage capacity, is currently being advertised for public comment.
The project construction is planned to commence in October this year - once the tender processes have been completed, and subject to the approval of the amendment applications which is currently being considered. Sharples Environmental Services is managing the Environmental Assessment (EA) and the amendment application. The Application for Amendment documents can be found on their website www.sescc.net under "Public Documents".
Revised solution
It was determined that the most favourable solution for increasing the dam storage capacity would involve the raising of the dam spillway. Therefore, in 2011, the George Municipality applied for Environmental Authorisation to raise the dam spillway up to 3m and to install a Fuse Gate System (FGS). The authorisation for this activity was granted in March 2012. In the final design of the project, the consultant has reviewed the catchment hydrology which has resulted in the authorised fuse gate alternative no longer being considered to be the most viable option.
Concrete spillway
The alternative of constructing a side channel was investigated and found to be the most viable towards raising the dam capacity while minimising damages caused by higher order floods up to those with 1:200-year return periods. This option requires the construction of a concrete spillway wall up to 100m in length, in a "duckbill" shape, upstream of the existing spillway, and connected to the existing retaining wall. This design requires that the dam wall crest be raised by 2m to provide sufficient freeboard, to prevent overtopping of the embankment by wave action that may coincide with the occurrence of large flood events. The material required to raise the dam wall will be sourced from within the dam.
Construction is due to start in October. Completion is scheduled for May 2018. The estimated duration of the project is 34 weeks. The cost of the project is R10 - R12-million. The raising of the Garden Route Dam wall will increase the dam capacity by 25%.

The draft artistic impression gives the perspective view of the proposed raised spillway at the Garden Route Dam which entails a weir in the shape of a duckbill being placed in front of the existing dam wall construction.
Deadline for comment
The draft impact report is currently out for public review and comment until Monday 10 July. Any comment can be submitted to Steve Kleinhans via e-mail at steve@sescc.net; fax on 044 874 5953; and / or postage to PO Box 9087, George, 6530. Adrian van Molendorff of Aurecon is the emplyer's agent for this project and any technical queries can be referred to him at Adrian.VanMolendorff@aurecongroup.com.
ARTICLE:  PAULINE LOURENS, GEORGE HERALD JOURNALIST
'We bring you the latest George, Garden Route news'