Quinton Williams of Provincial Traffic signs the memorandum Swapi handed to him.

GEORGE NEWS & VIDEO - At a protest march on Tuesday 10 March against the roll-out of Phase 4B of Go George, the organiser, Zola Swapi, demanded that the George Municipality suspend the roll-out planned for next Sunday, 22 March.

"The roll-out of Phase 4B before Phase 4A (Thembalethu) will contribute to conflict in the industry and the community," he said during a lengthy speech before memorandums were handed over to Acting Municipal Manager Steven Erasmus and Quinton Williams of provincial traffic.

"Another problem is the infrastructure. Parkdene, Borcherds, Lawaai and Conville are worse than Thembalethu." In the memorandum to the municipality, the group demanded that taxis be allowed to compete with the buses on the various routes.

During his speech, that was loaded with controversial statements, Swapi also had a go at the local provincial traffic department, saying they want two traffic officers, whom he mentioned by name, to stop shooting at their taxis and putting the community in danger. Read a related article on page 6.

Speakers
Among the speakers at the march was the son of former Uncedo chairman Sikhumbuza Mini, who was gunned down in 2016 outside his home in Thembalethu. Phumlani Mini (18) talked about how his life and that of his family had changed after his father's death.

Some of the other speakers included a woman from Blanco who complained about Go George buses, saying they want the taxis back.

John Joko from Borcherds said residents of the neighbourhood were not properly consulted or briefed on Go George and that the bus service is forced on them. They want the option of taking a taxi or a bus, he said.

Swapi gave the provincial traffic department and George Municipality 72 hours to respond to their demands. Xola Swapi looked liked he was proposing to acting municipal manager, Steven Erasmus, when he handed over the memorandum to him to sign. Looking on are Captain Thomas Barry and Acting Mayor Charlotte Clark.

Roll-out to go ahead
Thabiso Mazosiwe of the Provincial Department of Transport said an agreement had been reached by involved parties regarding the roll-out of Go George Phase 4B.

"We hence take note of the proposed march but are concerned about it, because agreements had been reached on the matters supposed to be raised and we will proceed with the planned roll-out on 22 March 2020 as agreed between all parties." 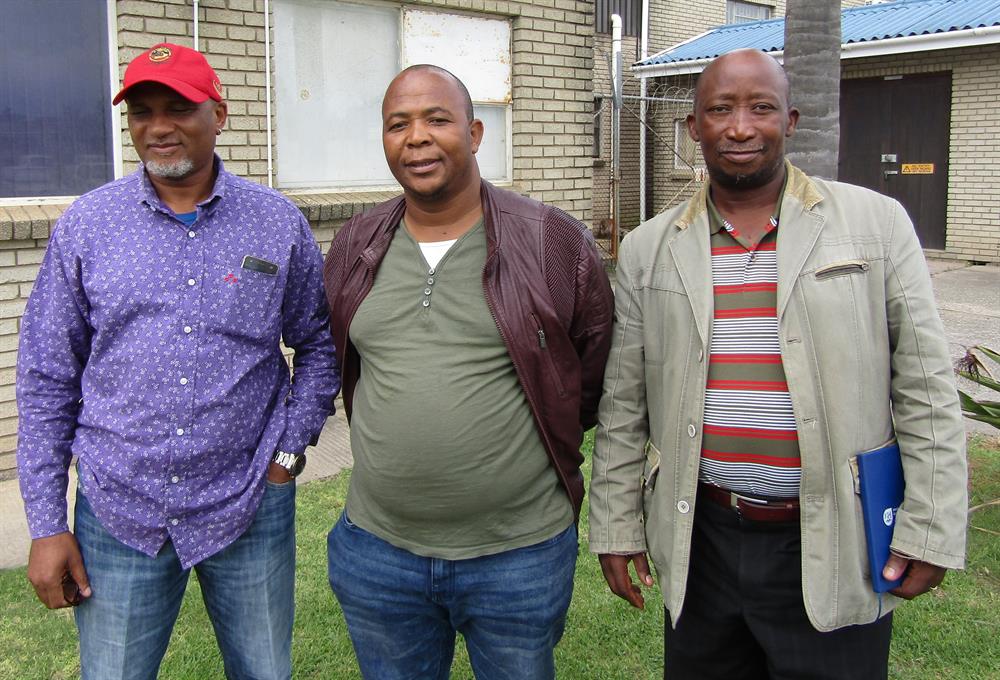 In a joint statement, Uncedo George and the George Community Forum expressed their support of the roll-out on 22 March:

In a joint statement released by the aforesaid chairpersons of the George Community Forum (GCF) and the Uncedo Taxi Association, we express our support of the roll-out of the Go George bus service to Parkdene, Ballotsview, Conville, Borcherds and Lawaaikamp on 22 March 2020.

Initially as the George Community Forum (GCF), we demanded and only spoke about a single Phase 4 for any roll-out thereof. However and due to circumstances beyond our control, we came to understand during the negotiations with government, the infrastructure in Thembalethu is in very bad condition due to a high degree of congestion, whilst other areas were better off in comparison.

We could therefore understand the need to split Phase 4 into two phases, being Phase 4A and Phase 4B. This meant while the infrastructure development is taking place in Thembalethu the roll-out program will be implemented in other areas, where the infrastructure is in better condition than that of Thembalethu.

According to Mr Mbudede, his Association was also against the roll-out of Phase 4B at first, but having extensively engaged with Government over the months, they have found common ground and are now in full support of the roll-out later this month.

It should be noted though that both Mr Booi and Mr Mbudede of George Community Forum (GCF) and Uncedo Taxi Association, George Branch, respectively agree that benefits for this project cannot exclusively be reserved for Uncedo operators. The above is premised on the words of the National Minister of Transport when he clearly stated that there is collective understanding that our democracy is founded on Human Rights, hence any operator who meets the criteria prescribed by law must have an equal opportunity to apply for an operating license.

Equally, any unreasonable attempts to eliminate competition to Go George cannot be encouraged, as these may go against the grain of the law.

The National Government, in agreeing with us as the George Community Forum, insists that gone are the days when our people were used as cannon fodder in developmental initiatives where they were simply used as the face of empowerment, while the real beneficiaries remain in the shadows living like fat cats.

In light thereof, this means the people of George in general and Thembalethu in particular, must be the real beneficiaries of the Go George initiative.

We as GCF have also become aware that there are people attempting to destabilise the relationship built with government, which is to the benefit of the entire George community. We remain concerned that these people have only their own personal interest at heart and not that of the community. We will not be distracted as we move towards the roll-out on 22 March 2020.

Response from George Municipality:
James Robb, Go George manager, said the concerns raised by Swapi during the march are noted. “We are glad, however, to report successful and productive engagement with both Uncedo and the George Community Forum since the Phase 4B roll-out was postponed in April last year.

"Although we may not agree on everything, both these organisations pledged their full cooperation for the planned roll-out on 22 March 2020 and are part of discussions that continue to deal with the issues they have raised.

"It is our mandate to bring a reliable, accessible, safe, and affordable scheduled public transport service to the people of George, and this is what we plan to do.”