Colourful birthday banners at central spots in town have been reminding residents since last week that Go George has been part of the community for six years already. The Go George communications team and champions (appropriately masked and maintaining social distance) gathered under the banner at the transport hub in Cradock Street to give the service an enthusiastic thumbs-up.

GEORGE NEWS - Six years have gone by since the first scheduled buses of George’s own public bus service departed from the York Street depot at 05:00 on 8 December 2014. It was a momentous occasion as the first four routes rolled out to Rosemoor, Denneoord and Loerie Park, and to the Garden Route Mall – Phase 1 of the George Integrated Public Transport Network had been launched.

“So much was still to be learned and experienced, but we were immensely proud and excited and still have not lost that first enthusiasm and passion,” says Go George manager James Robb.

After the latest roll-out to Parkdene, Conville, Borcherds and Lawaaikamp in March this year, 26 active routes covering a network of 142km are now crisscrossing the streets of George, enabling residents to travel to work, school, medical and community services and shops anywhere in town.

George Mayor Leon van Wyk congratulated Go Geroge, saying that this birthday should be celebrated with pride. “I will always remember the positive comments made in the early days as residents safely gained mobility and access to retail stores and community events in a way not previously available to them.

"The management team needs to be congratulated on this birthday as they proudly strive for recognition as an excellent bus system operator,” he said.

According to Robb, rolling out the remaining phases of the service proved to be more challenging than envisioned, “but we are positive and looking forward to continue growing the service.” 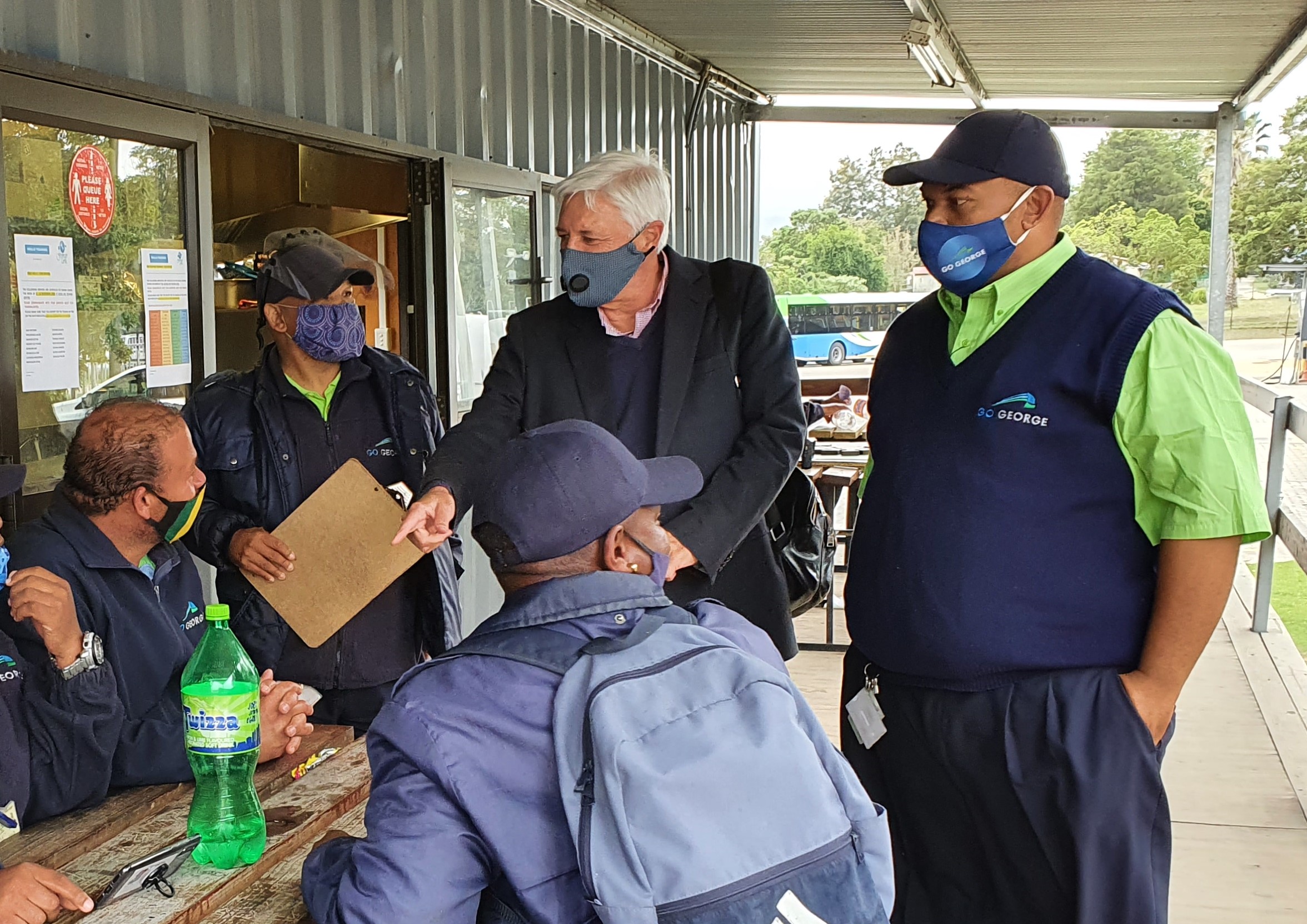 George Mayor Leon van Wyk (middle back) recently paid a visit to the bus depot and was intrigued to learn from the staff how the canteen was built and established, and is being run by George Link shareholders themselves. “This is the kind of opportunity that Go George is bringing to our residents,” he said.

‘Different kind of birthday’
The usual birthday celebrations with communication champions dressed up in colourful costumes, making a joyful noise all over town and handing out treats, could not be done this year due to Covid-19 safety precautions.

“Our focus is different this year,” says Robb. “We are thinking of those who have lost loved ones, their income, the roof over their heads.

“We want to thank our passengers, our staff, our stakeholders in operating the service, the government departments that have funded our efforts to curb the pandemic – some for their patience and cooperation, some for their support and long hours of work, others for their courage in performing their duties despite the risk involved. We could not have reached this milestone without people who care.”

Passengers are once again reminded to adhere to the simple but effective Covid-19 safety measures required on the bus: wearing a mask that covers both the mouth and nose, sanitising or washing hands, keeping a safe distance where possible, keeping bus windows open for good ventilation, sneezing or coughing into a bent arm, not travelling on the bus when sick, travelling off-peak if possible, and not using the bus for non-essential trips.