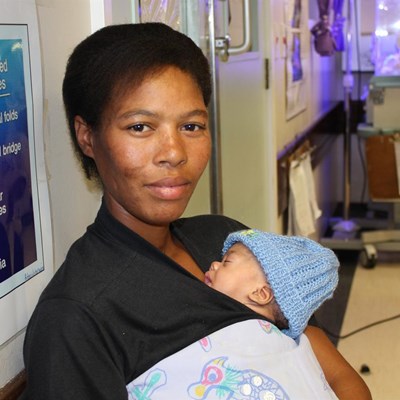 By using only breast milk, and not formula milk, to feed the premature babies, the infections, specifically necrotising enterocolitis, can be decreased by more than 10 per cent," says Michael Vonk, the hospital CEO.
"Unfortunately, not all mothers of premature babies produce enough breast milk for their own babies. Some mothers are too sick to express breast milk."

In 2010 the hospital established a donor breast milk bank for the unit with the vision of later supplying donor milk to all the hospitals within the Eden region. Unfortunately, their milk bank is going through a very difficult period and is in urgent need of donor milk.

One of the babies whose life was saved because of the kind donations to the milk bank, is Benjamin Bandez. he was born on 27 November 2011 and has spent his entire life up to now in the George Neonatal Unit. Benjamin was born 13 weeks premature, weighing a mere 680g. Breast milk from his mother was not available and he received only donor breast milk. Benjamin now weighs 2,2kg and is finally ready to go home.

"He survived against all odds due to the fact that he only received donor breast milk and not formula," says Vonk. Western Cape Health Minister, Theuns Botha, called on women who are able to support this cause. "The promotion of breast milk for babies is an important part of our objective to have a healthier society and creating wellness. The proven track record that breast milk babies have stronger immunities strengthens our cause. If you are able to make this special contribution, please do."

Who can donate breast milk?
Any lactating and breast feeding mom who can express enough extra milk.

You will then be asked to come to the hospital, only once, to complete two forms and to undergo a rapid HIV finger prick test. This will not take more than 15 minutes of your time. You will then be given a sterilised container and from there the hospital drivers will come and collect the milk at your house or work. The donor milk is pasteurised by the milk kitchen team and is then issued for a specific premature baby who needs it.

"We urgently appeal to lactating mothers in Eden who are producing more than enough breast milk to help us to save the life of a premature baby," appeals Mi-nister Botha.
Posted on: 06:00 Thu, 25 April 2013