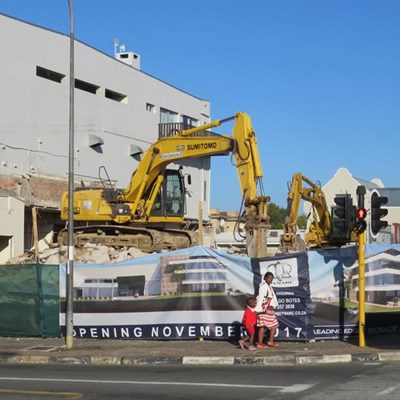 Dynarc is constructing their news headquarters at a cost of R60-million on the corners of Meade Street and Courtenay Street and will be opening in November this year. This is one of the major boosts into the economy of George. Photo: Pauline Lourens
GEORGE NEWS - Dynarc Capital, a Bloemfontein property development and brokerage firm has relocated to George and is investing R60-million in its new headquarters, currently being developed on the corner of Courtenay and Meade Streets (formerly Halfway Toyota).
Dynarc Capital was responsible for the development of the new Tavcor George and Imperial George buildings near the Garden Route Mall. Chairman Willie van Heerden says the R60-million investment demonstrates his confidence in the future of the CBD. Dynarc is making further inroads on the George property scene.
Alida de Beer reported last year that Dynarc bought the commercial properties housing the Caltex filling station, Jawitz, Bongo's, The Girls, and the hardware shop in George Road in Wilderness, as well as 7,7 hectares of land opposite the George airport (on the eastern side).
"We aim to redevelop the Wilderness property over the next five years, keeping the existing tenants. For the property at the airport we have a more long-term view," said Botes.
Steinhoff
The September 2016 buyout of Tekkie Town by Steinhoff International at an undisclosed amount, should auger well for the region.
Tekkie Town Chairman Braam van Huyssteen and CEO Bernard Mostert, who stayed on at the company's headquarters in George, said the expansion into Europe should bring growth within the organisation and employment opportunities locally and abroad.
Steinhoff, with its head office in Amsterdam and through its operations under Pepkor, has activities involving clothing and footwear, such as Ackermans, Pep, Shoe City, JD Group and Pepkor Speciality stores like Shoe City, John Craig and Dunns, which sells branded footwear. Steinhoff also owns a sawmill in George which manufacturers and exports poles and other wood products.
Mediclinic
The development of a new, state of the art hospital for George at a cost of R500-million, will enable the hospital to provide for the fast growing demand for medical services in George and the Southern Cape - yet another capital injection.
It will incorporate the Geneva Clinic, as well as a separate doctors’ block. Rezoning approvals are being awaited. Mediclinic is hoping to build their new hospital east of George near the Kraaibosch area, but other role players would prefer to see it relocate to the open land next to Mountview Resort in York Street.
Growing economy
The Spar Group approved the development of two Superspars in George as they recognised the city's rapid growth.
On the property development side, 54 homes are being built at Kingswood Estate and an explosion of homes in retirement estates on the eastern side of town form part of the stimulus.
Furthermore, smaller businesses like Akademia, a private higher learning institute; eating establishments, and a pre-primary school opened their doors in recent weeks - all of which are sure signs that George has a robust economy.
he growth of the agricultural sector with strawberries now being exported is part of the new, growing George.
Although under-marketed, the hospitality industry reportedly had a good holiday season. George Business Chamber President Dr Willie Cilliers feels positive about the local economy and sees Dynarc's entry into George as good news for the CBD. "All roleplayers will have to examine the growth of the CBD as jobs can only be created when the economy grows."
Green Energy
Late last year George Municipal Manager, Trevor Botha confirmed steps are being taken to obtain finance for the development of a proposed hydro electrical plant to be positioned at the Swart River dam in the Outeniqua Mountains.
He said: "We are also actively investigating the installation of sun energy farms and in the near foreseeable future plan to ask for development proposals. It is foreseen that incentives will be given for green developments in George."
It is estimated that 35 families are 'semigrating' to George from the northern parts of South Africa every month.
ARTICLE & PHOTO: PAULINE LOURENS, GEORGE HERALD JOURNALIST
'We bring you the latest George, Garden Route news'