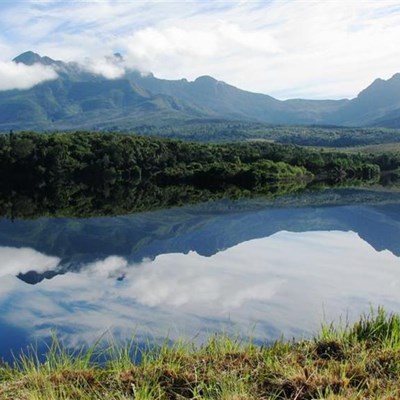 The George Dam when quite full.
GEORGE NEWS - The Western Cape has experienced a drastic drop in dam levels compared to last year, and George's Garden Route Dam is no exception.
Since February when the dam was full, the level has dropped to just 64% this week.
Minister of Local Government, Environmental Affairs and Development Planning in the Western Cape Anton Bredell urged consumers to use water sparingly.
"Help us in managing dam levels to more sustainable levels before the summer. The good news is that the levels of the major dams across the province have increased to an average of 54,2% from around 43% a few weeks ago. The bad news is, at the same time last year levels were on average 79%."
For the month of July 2016 George recorded 51mm of rain.
Monitored
George Municipality's Acting Communications Manager Chantel Edwards-Close said this week: "The water situation in George is carefully monitored by the Department of Water and Sanitation and in terms of the George Water Services Development Plan and the following projects are incorporated into the raw water resource long term plan: - The Kaaimans pump station will be operational within the next week, adding to the total daily yield. The repair works to the Malgas pump station will start within the next four months. This will raise the available raw water yield to 55,75 million liters per day.
"The ultra filtration reuse plant is ready to be brought into operation should it be required. This will add almost 10 million litres per day. The raising of the Garden Route Dam spillway is planned for completion by the end of 2017 and will raise the total available raw water capacity to 59,04 million litres per day.
Therefore by the end of 2017, George's capacity will have increased to 59,04 million litres per day. The current average consumption of George is 28,5 million litres per day. The long term forecast predicts normal rainfall. There is no serious infestation of alien vegetation on the dam edge that affects the inflow. Our environmental department confirms that the bottom part of the dam was cleared in 2006."
Population growth
Edwards-Close said the planned water infrastructure makes provision for the current population growth, and Director for Civil Engineering Harold Basson, confirms that up to 25 new households per month can be accommodated.
"As far as the appointment of a consultant for the raising of the Garden Route Dam spillway is concerned, it is subject to various legislative processes to ensure a fair, transparent process. Part of the delay has been in amending procurement documentation and evaluation to comply with the latest legislative requirements.
This has added to the normal time frames. Due to the upcoming elections, various committees have been postponed, further delaying tender processes. The planning is still to implement in the present financial year.
As indicated previously, the raising of the Garden Route Dam spillway will add 5,5% to the assured yield of the water source system of George. With the present growth patterns, these capacities will be sufficient until at least 2028."
'We bring you the latest George, Garden Route news'