First of its kind fire equipment for George

The tanker is the first of its kind to be used for firefighting in South Africa.

GEORGE NEWS - The George Municipality Fire Department’s capacity to deal with fires in remote and dry areas has received a significant boost with the delivery of a large capacity water tanker and portable dam.

The tanker is the first of its kind to be used for firefighting in South Africa.

Month-long fires raged in George and surrounds in October and November last year, much of which had originated far away from fire stations and accessible water resources.

“There are few municipalities in the country that deal with the combination of challenges faced in this municipal area, which includes semi-desert areas north of the Outeniqua Mountains, mountainous terrain on both sides and over the mountain as well as large tracts of agricultural land, pine plantations, indigenous forest and winding inaccessible roads connecting towns and villages over long distances. 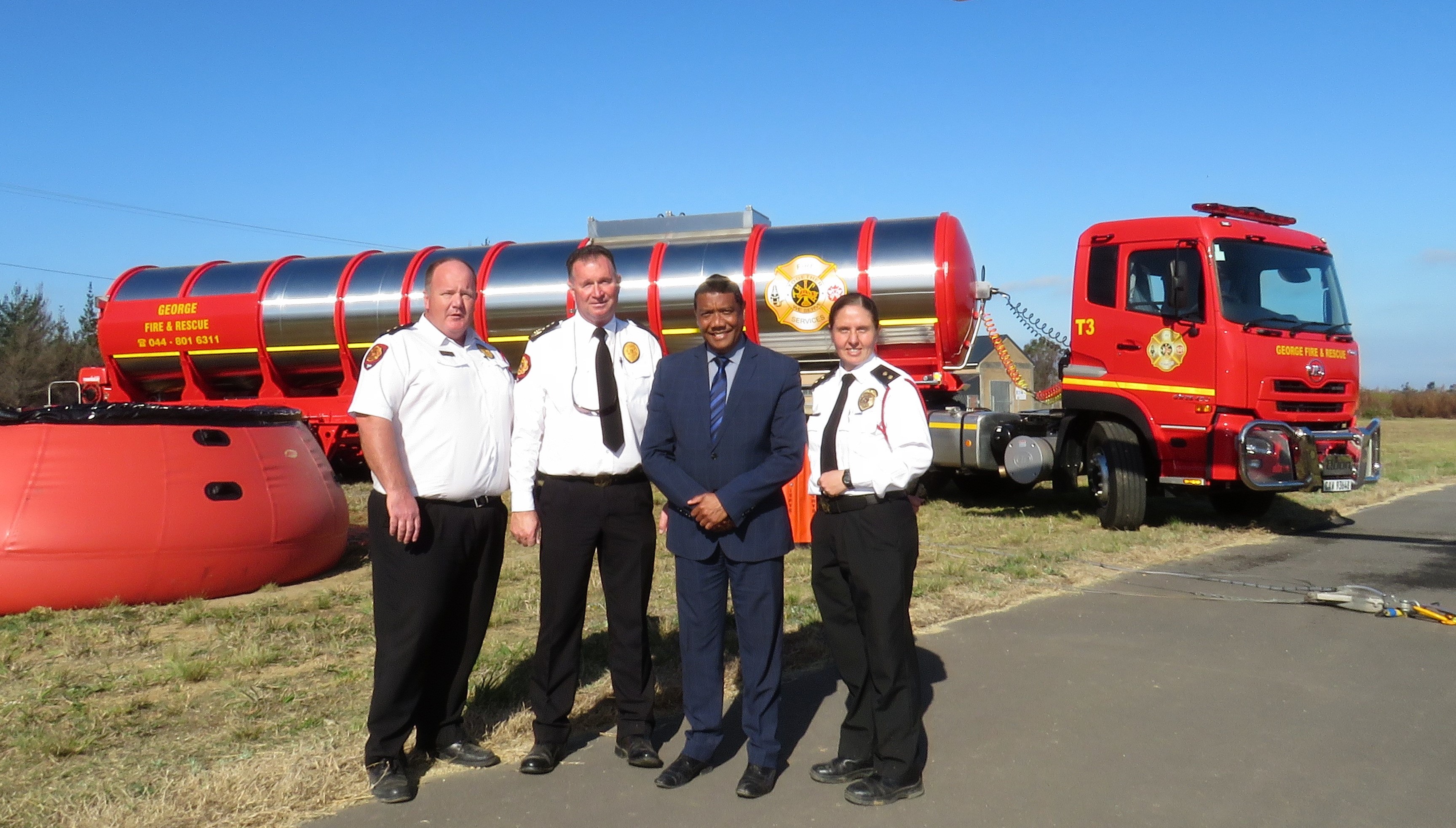 “We wanted to be smart and use resources wisely, so we did the research, consulted with colleagues and role players and came up with a practical, sustainable solution that would address some of the issues,” said Mr Barnard.

The tanker
The 35 000-litre stainless steel water tanker will be used as a movable water source that can be driven to a suitable site from where all kinds of fire vehicles can refill. The tanker is fitted with a pump that can extract water from sources such as farm dams and can deliver 2200 litres per minute at 10 Bar.

On the road the 18-metre (13-metre tanker pulled by a five-metre truck), 22-wheeler vehicle is an impressive site and requires a special EC-driver’s licence, which most of the city’s firefighters have.

The total cost of the truck and tanker was R2,4-million and was built by CA Muller tanker builders in Wellington. 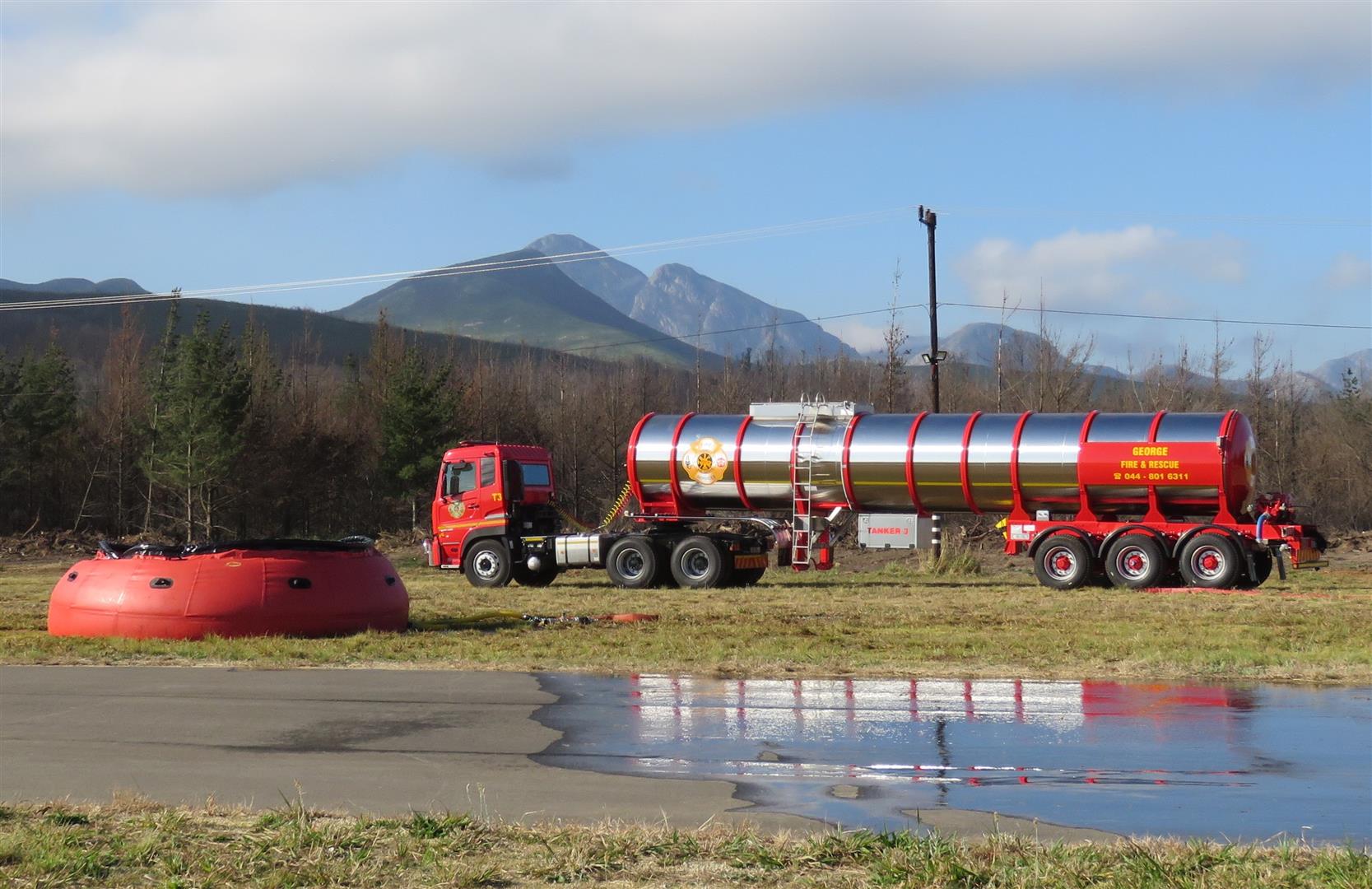 George Municipality just took delivery of a 35 000-litre water tanker, the first of its kind to be used for firefighting in South Africa, and a 14 000-litre custom portable dam.

The portable dam
The 14 000-litre portable dam is one of only three in the country and the first for a local municipality (the others are at West Coast District Municipality and City of Cape Town). The dam is intended as an artificial water source from which a helicopter bucket can scoop water or fire vehicles can be filled.

The dam in turn can be filled by the new water tanker or by other fire trucks, depending on where the portable dam is set up. Manufactured from high grade poly-yarn industrial material that can be folded up and transported inside an ordinary trailer, the portable dam’s equipment includes a portable pump, hard suction pipes and valves for filling or emptying the dam water.

The water pushes the walls up and the dam readjusts as water empties out (it is not an inflatable). Any water that is not used can be pumped from the dam back into the tanker and reused elsewhere. The custom-built dam was built by Cape Town-based Ark Inflatables at a cost of R28 000.

“The tanker and dam now become part of a streamlined system in which water can be brought much closer to a fire, and therefore significantly reduce the turnaround time.

"Instead of having to drive several kilometres to refill one truck, or wasting valuable fuel and water refilling time for choppers, the tanker and portable dam is a sustainable combination solution that will make a significant difference in the first hour of a fire. In firefighting, the first hour is crucial to bring a runaway fire under control, which ultimately increases the chance to save people and property,” said Mr Barnard.

Highly skilled Work on Fire chopper pilots yesterday demonstrated how water is scooped from the new portable dam. The 14 000-litre portable dam is filled by George Fire department’s new 35 000-litre water tanker and forms part of a new system that would bring water sources closer to fires in remote and dry areas of the municipal area.

George Executive Mayor Alderman Melvin Naik said council considered the spend for this equipment an investment in the lives and property of the municipality’s people. “The runaway fires in George last year was a major wake-up call and we were blessed that we did not lose lives in our municipal area. We did, however, lose large tracts of valuable agricultural land, timber and a timber processing plant, which impacted on jobs and livelihoods.

"The origins of last year’s fires were on the Klein-Karoo side of the Outeniqua mountains and ran into areas with very few water sources. We realised it may have played out differently if we had equipment such as what we have just acquired.

"We are proud to be the first in South Africa to introduce the combined tanker and dam solution, and believe it will make a difference where it matters,” said Alderman Naik.