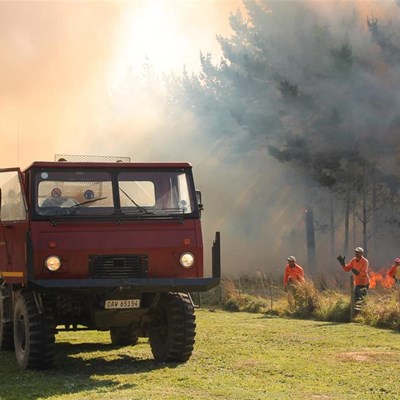 The fire just off Plantation Road in Heatherlands. Photo: Myron Rabinowitz.
GEORGE NEWS FLASH - Eden and George Fire Brigades are fighting off 6 different fires in George and surrounds at the moment.

Head of Eden District Disaster Management Gerhard Otto said no people have been injured in the fires.
Twenty-two Working on Fire members are on the scene in Heatherlands where firemen from George and Eden Fire Brigades are fighting to douse flames that have spread among houses in the suburb.
George Herald Editor Ilse Schoonraad is on the scene in Heatherlands and reports that a house and palm tree in Erica Road (between Plover and Myrtle Street) in the heart of the neighbourhood are burning. The wind is pushing the tree over. Firefighters are hosing the area and are trying their best, but say the tree is going to tumble. Luckily the house was saved. Sparks and burning leaves from Plantation Road blew over from Plantation Road to this house. "According to Cllr Rassie de Villiers, who is on the scene here with us, a helicopter is on its way," says Schoonraad.
The streets around Plantation Road have been closed for traffic due to the possibility of smoke inhalation and also bad visibility.
At the top of Plantation Road, where Forest and Plantation Road meet, the flames are still blazing.
Otto says a team from George Fire Brigade are on their way to Hoekwil where a house was in danger, but the fire has burned passed the house into nearby reeds. George Herald Journalist Lyndall Mgadle says a spotter plane is being sent out to Hoekwil.
Earlier, Otto said two helicopters and a fixed wing aircraft are on standby and will be sent up should it become necessary.

According to Otto, no houses have been damaged in Pacaltsdorp where the well-known Greta Gericke was among residents who had to be brought to safety. Six fire fighters from Eden Fire are deployed there.

Two fire fighters from Eden Fire Brigade with a vehicle and fire fighting equipment are deployed at Ruiterbos and are moving over to Friemersheim. "There is another fire on the other side of the mountain at Moerasrivier where Oudtshoorn Fire Brigade and members of the army are fighting off the flames," says Otto.

"We have no idea how these fires started. The hot, strong winds are fanning the flames."

Journalist Myron Rabinowitz reports from Plantation Road that the wind is blowing down the mountain, pushing flames towards Glenbarrie.
"Luckily there is a 50m wide lawn and parking area separating the homes here from the forest. Emergency workers are asking residents to vacate the area. They are worried about smoke inhalation."
Click here for a photo gallery of the fires.
Read a previous article: Inwoners vlug terwyl brande woed

Firemen on the scene in Heatherlands. Photo: Myron Rabinowitz

George Herald Editor, Ilse Schoonraad, is on the scene in Heatherlands and reports that a house and palm tree in Erica Road (between Plover and Myrtle Street) in the heart of the neighbourhood are burning. The wind is pushing the tree over. Luckily the house was saved.
ARTICLE: ALIDA DE BEER, GEORGE HERALD JOURNALIST
'We bring you the latest George, Garden Route news'