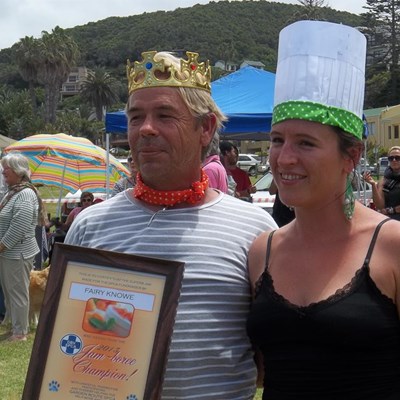 Francois Lamotte from The Views Hotel, Braam de Swart from Pomodoro, Sam Appleby from Beejuice and a team from The Blue Olive all competed for kudos in the light-hearted, top eaterie section. Spectators were treated to some extraordinary jam tastes like lemon grass and vanilla pod jam, which earned Deon Jonker and Kevin Palmary from the Rondé-view Café second place and Outeniqua Power Van's Annabelle Greenwood flavoured hers with ginger, earning her third placed. Jacques Buys from Flava Café served his mouth-watering jam with chicken liver pâté.

'Die Vleie Gemeente', from Hoekwil, made 100kg jam before the big day as well as George's Moederkerk Gemeente, who cooked up a whopping 300kg of the delicious conserve.

All of the dogs and their owners enjoyed the relaxing 'Woof-athon' beach walk with watering stations supplied by the NSRI and Beejuice café except Holy Cross pupil June de Wit who was made to sprint the course by her over-enthusiastic dog 'Bunty'.
Participants were treated to agility and obedience training demonstrations by dogs belonging to Carin Kritzinger, of the SA Police Dog Unit, Trish Hall, Dylan Heydra and Garden Route Dog Club's Johlene Lenaers. Gillian Lee, a teacher from York High, showed how nimble her SPCA adoptee 'Meggie' was as she leapt for bubbles and thoroughly amused the onlookers.

The Master of Ceremonies, Abri le Roux of Caffé Pronto, kept the public informed about the variety of activities throughout the day. Leopard Protection Research, SANParks, The Wilderness Rate Payers Association, 'Art-in-the-park' stalls and the Welsh ponies drew a lot of attention whilst the children loved the jumping castle and face-painting and cupcake decorating booths.

The GRSPCA wishes to thank Huletts for their donation of 1 000kg sugar, De Krans in Calitzdorp who gave 600kg apricots, Cadac for their loan of filled gas cookers, ADE Labelling for their sponsorship of 3 000 high quality jam-jar labels and Hills and Mandy Store of the Wilderness Vet Shop for the amazing prizes for the 'Woof-athon' dog show.

The draw for the SPCA raffle, which has been on-going for a few months, is due to be held tomorrow, Friday 29 November, during the last SPCA Bingo night for 2013 at the George Bowling Club from 19:00. Everyone will be welcomed with a complimentary glass of sherry on arrival as a pre-Christmas treat! Supper and a cash bar available. From left: 'Woof-athon' prize winners Pam Lepan with Rex, Alexandra Alant and Goldie, Sarah de Wit with Mac (who had run out of steam after all of the excitement) and Alan Hamblin and Buster.