Dumpsite is no eyesore 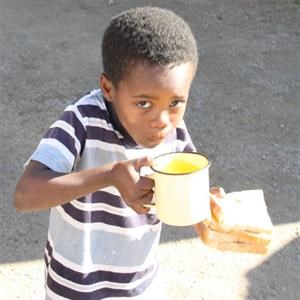 A cup of juice and bread is all that sustains some children in Syferfontein for the weekend.
GEORGE NEWS - Walking around Syferfontein on a sunny Friday afternoon you see children arriving home from school, babies playing on the dirt roads, and neighbours talking across their fences. There might not be much money around this settlement, but its 1200 residents proudly maintain their neat gardens and roads.

However one can also appreciate the impact that the four soup kitchens who operate on this area have on the lives of its 261 families, especially those too young or sick to fend for themselves.

Children arrive at the BART Foundation’s soup kitchen in drips and drabs on their way home from school to fetch bread and juice from Muegeline "Moekie" Galant and Maria Adonis whilst social worker Thelma Richards strikes up conversations with children and adults alike. Thelma, who says this community is her "heart beat", knows everyone by name (and age, it seems), will happily show you around this ever increasing settlement, even introducing the lovely Tannie Christina van der Vind who is currently the oldest resident living in Syferfontein. She is 83 tomorrow.

The BART foundation feeds youngsters on Mondays, Wed-nesdays and Fridays thanks to food from private sponsors and the municipality.

Although they experienced difficulty in the first few months after the soup kitchen project was handed over to the municipality from the ACVV, Richards says that the provisions they receive from the municipality is enough for two days of soup per week and porridge for the sick.

Not only are the physical needs of Syferfontein youngsters being met, so too are their educational needs.
Assistance, in the form of the ‘Rock Series’ computer tutor program, is available on a computer at the soup kitchen for school learners to get Maths and Reading assistance. Christo Fourie from Rock Series hopes to expand the facilities available to local learners by converting an onsite container into a workroom with ten computers loaded with this helpful program. It will assist not only learners currently struggling in school but especially those youngsters unable to attend school due to educational deficiencies.

This week a group of 19 Dutch students from Groningen, who have been in George for the past three months and assisted at the BART foundation and Bethesda, head home.

Amongst them they have not only built six stable wooden homes for existing Syferfontein residents but also cleaned wounds, helped at crèches and schools, and develop a vegetable garden in Syferfontein.
For a settlement built on a dumpsite, things really are looking good.


Here Moekie shows Alecia Davids how to use the Rock Series computer tutor.