Dad has no say about unborn child 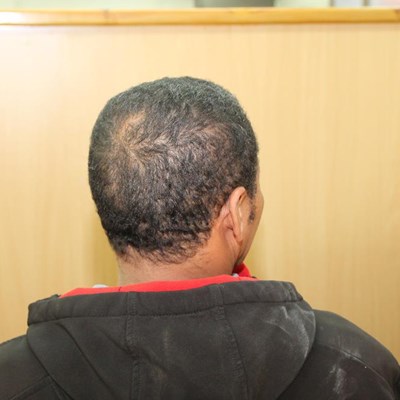 Jim Brown (not his real name) telling his heartbreaking story at the George Herald office. Photo: Myron Rabinowitz
GEORGE NEWS - An incensed father of a new born baby girl is at his wits' end. “I was powerless and had nowhere to turn for help during my wife’s pregnancy when she drunk herself into a stupor. At the rate she was consuming alcohol, I knew that my child would be a FAS [fetal alcohol syndrome] baby. My wife fell over more than once.
When I intervened, I was met with abusive language and she attacked me - going ballistic at times,” the irate man told the George Herald.
In desperation, Jim Brown* (54) turned to the police and welfare organizations for help. "My attorney told me that there is no law in the Child Act that a husband can legally use to prevent his spouse from drinking. I couldn’t do anything to protect my unborn child. It is a travesty of justice that I as the father have no rights whatsoever over my own child,” said Brown.
He said the police told him it is not against the law to drink . "Welfare organizations bluntly told me that they obviously can’t remove an unborn child, saying their hands are tied. They said in terms of the Child Act they can only act in defence of a child between birth and the age of 18."
His worst nightmare became a reality as the baby only weighed 2,6 kg at birth. “My eldest child weighed 3,8 kg.
Even though she is only three months old I can see the difference when I compare her to my eldest. The strain on our marriage has led me to file for divorce. I know that I will have to care for my child for the rest of my life as she is bound to have medical issues.”
In reaction to his predicament Tossie du Toit, the ACVV’s regional manager confirmed that in a situation like this their hands are tied. "He is right. We cannot remove an unborn child, and can only motivate mothers not to drink during their pregnancy. The only avenue open to a father in this predicament, is to approach the Commissioner of Child Welfare and complete a Form 2.
The court will be compelled to ask a social worker to investigate the situation and hopefully bring the case before the court, even if this is just a deterrent. This is one of those situations where the media plays a big role to bring across the dangers of drinking during pregnancy because it happens all the time,” said du Toit.
*Jim Brown is an alias as the father's identity is withheld to protect the child.
ARTICLE AND PHOTO: MYRON RANBINOWITZ, GEORGE HERALD JOURNALIST
'We bring you the latest George, Garden Route news'