"We are currently at 100% capacity in our ICUs in the district as far as personnel numbers are concerned," Gerhard Otto, the Garden Route Disaster Management chief, told George Herald on Tuesday.

"Our bed capacity looks good, but with many healthcare workers who have become ill and are currently self-isolating, we are looking at the best and fastest possible options to get more trained staff on board."

He said they are considering the redeployment of Médecins sans Frontières (MSF) volunteer teams and/or the 'Cuban Brigade', currently assisting in the metro, to assist in the Garden Route.

Additional staff could also be appointed and, should the need arise, Covid-19 patients in ICU could be transferred to hospitals in the metro.

In a report he tabled at the Garden Route District Council on Monday, Otto says on average, the growth in the number of cases has been more than 60% per week over the last two weeks and it is foreseen that this trend will continue for at least the next two to three weeks. In the seven days prior to his presentation, the number of cases had increased by 160%.

Infection rate
The district's infection rate is now faster than that of the Cape Metropole where a tapering off of new cases has been recorded. The number of active cases per 100 000 of the population in the Garden Route is 289, compared with 191 in the Metro.

Otto told the newspaper that the Garden Route is not expected to reach the total infection rate of the Metropole as the district is less densely populated.

'Natural characteristic of pandemic'
Asked the reason for the easing of the infection rate in the metropole, Mark van den Heever, deputy director of communications at the Western Cape Health Department, said the metro is in another phase of the pandemic and has reached the peak earlier than the rest of the province. The declining number of deaths and hospitalisations are natural characteristics of a pandemic.

"First you see an increase and then a flattening. We will thus have a flatter, but longer peak and not as drastic an increase as originally thought. We monitor the situation so that we are ready for any change in the situation." He said herd immunity has nothing to do with the flattening.

Otto said once the peak is reached and the infection rate decreases, vigilance is of utmost importance to avoid a second outbreak such as seen in parts of Europe where people start to relax in their preventative behaviour.

Pressure of workload
In the Garden Route, all the sub-districts continue to feel the pressure of the additional workload. "The situation will be monitored carefully as to the ability of the teams to manage it," said Otto.

Covid-19 hospital admissions are increasing. As of Monday 27 July, 89 patients were in hospital and nine in critical care. Eighty-seven people were in isolation at the Petro SA West Campus facility. "There are comorbidities for the vast majority of patients," said Otto. 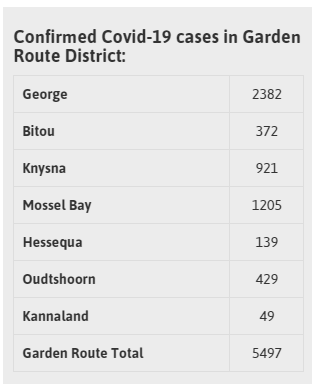