An additional 12 deaths have been recorded in the province, bringing the total number of COVID-19 related deaths in the Western Cape to 3 923. We send our condolences to their family and friends at this time.

Today, we held a follow up bosberaad where we discussed the province’s immediate response, with a focus on the next 100 days. While today’s discussions were focused on jobs and the economy, we continue to focus on those other two pillars of dignity and well-being and safety. 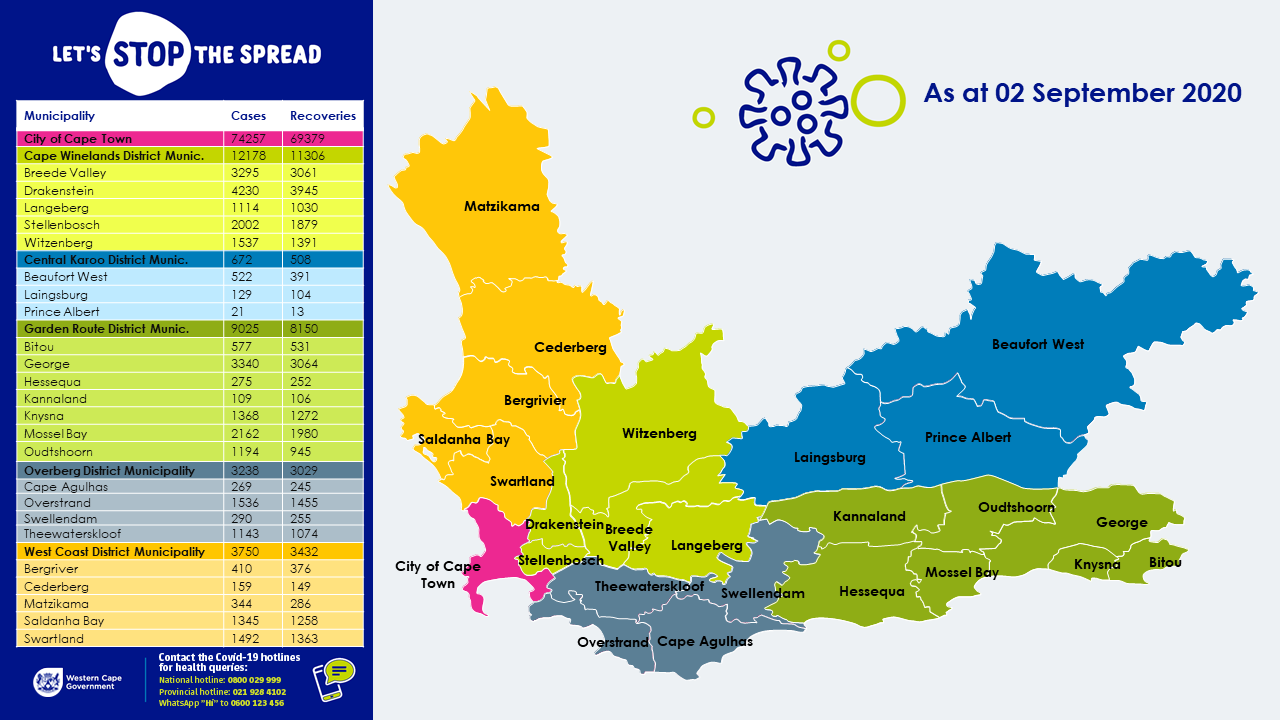 Jobs:
The hard lockdown has had a significant impact on businesses of all sizes across the Western Cape. This has resulted in significant job losses, which mean that many households have been left without a bread winner, and the ability to put food on the table.

During our discussions today, we had several business people discuss the challenges they currently face. The discussion was open and honest, which I value. It is important for us to hear all perspectives so that we can incorporate these experiences and feedback into our plans.

We also heard about the major impact that COVID-19 has had on their business, and how load shedding has further exacerbated the problems that businesses face.

During today’s discussions, we also received the news that Eskom had moved to level 4 load shedding which is devastating to our efforts. Energy security is key to ensuring that businesses can keep their doors open and that we can entice investors to the region.

Safety:
The Western Cape Safety Plan is already well-developed, with aspects already in the implementation phase. The plan has tasked the Department of Community Safety with the task of reviewing the Western Cape Liquor Act.

The link between alcohol and violence is well established in research and anecdotally, when alcohol was banned during the lockdown, we did experience decreased levels of violence in the province. A ban is not sustainable in the long term and we are therefore driving legislative amendments and smart interventions to reduce alcohol related harms.

Minister Albert Fritz has appointed an Alcohol Related Harms Task Team. This team will drive a series of proposed legislative amendments which include:

-Inserting an objective test within the Act to determine whether alcohol has been sold to an unlicensed outlet or an individual.

-Obliging license holders to take reasonable measures to check that patrons and clients are of a legal drinking age.

-Aligning the Act with the Liquor Products Act to ensure that the definition of "illicit liquor" is aligned in both.

-Providing for a public participation process to alter existing licences

-Ensuring that a record of all liquor sales is kept by outlets and prescribe the measure of detail required.

-Expanding the powers of Liquor Licensing Tribunal Committees under section 24 of the Act, to also hear enforcement matters.

-Expanding the capacity and availability of the Appeal Tribunal/Authority.

-Enabling the Minister of Community Safety to prescribe by way of regulation, additional and relevant information to be considered by the Liquor Licensing Tribunal or the Presiding Officer.

These proposed amendments will first need to serve before cabinet, before being prepared by our legal teams to be gazetted. These interventions must be coupled with substance abuse interventions, which are being led by the Department of Social Development in the province.

These include a full spectrum of targeted services tackling substance abuse and misuse, including prevention, early intervention, as well as outpatient, in-patient and aftercare services.

The Department also funds four treatment programmes based at schools in vulnerable communities, which target 550 adolescents and which play an important role in keeping at-risk learners in school.

Dignity and well-being:
The Department of Health in the province continues to lead our efforts to protect residents from COVID-19, while at the same time ramping up other healthcare services such as immunisations, and chronic care, to ensure the health and well-being of our residents in the long term.

The Department of Social Development in the province has also been working hard to ensure the dignity and safety of vulnerable groups as a result of financial security, unemployment and other stressors in the lives of children and families which can result in additional problems for children and for families.

The Department has budgeted R 824.98 million has been budgeted for the Children and Families programme. This budget allocation is dedicated to child protection services, child and youth care centres, families and Early Childhood Development services.

Some of the services offered by the Department and its NPO partners include:

Also in August, the first residents of the Vlakkeland development in Paarl moved into their new homes. Minister Simmers also handed over a newly built community hall for residents in Botrivier, which creates a space for them to host events and engagements.

The Department of Agriculture has also handed over kits for the development of over 2000 food gardens throughout the province- giving people the tools and the skills to grow their own food. Being able to grow their own food, allows households to not only provide their families with nutritious and healthy food, but also creates a sense of dignity. For those who can produce more food than required, these gardens can also provide a source of income for families.