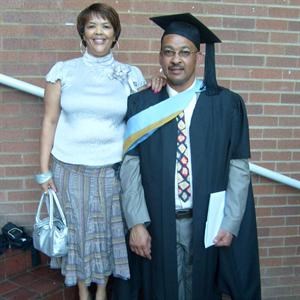 Patrick and Marilyn Levendal at Patrick’s Masters degree ceremony recently.
GEORGE NEWS - Two dedicated George teachers, Neil Plaatjies (43) and Patrick Levendal (45) received their Masters degrees in education at the North West University on the 19th of May.
They have walked a long road together. Both born and bred in George, with dads who worked together at Table Top many moons ago, their passion for education would inextricably link their adult lives together.

Both started their teacher training at the Southern Cape Teachers College in Oudts-hoorn, but that is not where they became friends. Nor did it start when they taught together at Hibernia Primary. No, a firm friendship would be forged when they ended up choosing the same direction of study when approached to participate in a pilot project launched by the North West University in 2004.

Little did they know that an honours and masters degree lay ahead for each one, and that in 2012, their PhDs lay beckoning.
Patrick admits he would like to walk this last stage with Neil, because they "complement and motivate each other". They both remember the day in 2008 when they began their Masters degree course. "Waar sit ons nou ons koppe in?" ran through their minds that first day. But their passion and hard work would pay off.

Neil’s thesis topic was "The experience of intermediary educators in the George area and the implementation of inclusive edu-cation", a subject that he is passionate about. His findings from interviews at eight different schools were that teachers in especially less privileged schools were frustrated at the lack of infrastructure and support available to assist them to deal with children with various disabilities and limitations.

Patrick, an Afrikaans teacher at Hibernia Primary School who teaches three Grade 6 and three Grade 9 classes averaging 35 learners per class, wrote his thesis about "The work satisfaction of male educators in the George area." He was able to talk to the longest serving male teachers in eight different schools and heard firsthand their frustrations at lack of promotion for various reasons.

Both Masters students reported that the lack of parental involvement, due to va-rious reasons, was a major obstacle and one they hope will receive attention.

For both Neil and Patrick, taking on these study loads with teaching and extra-curricular commitments as well as families to look after, proved challenging. Patrick’s commitment to complete his Masters was put to a tough test when both his parents got ill and died during this time. He admits that it was through the support of his lecturers, friends and family that he completed his studies and could honour his folks and especially his dad’s request that he not give up studying.
Neil, who’s six Grade 6 classes consisting of about 35 learners per class at Heidedal Primary, admits that this degree has "enriched my knowledge and made a better person of me".

He adds that he is not afraid to step up and share his opinion and input anymore. He decided to take a break from studies this year to reconnect with his wife, Althea, and his children, Jamie-Lee (12) and Bertram (8).

For Patrick, studying had to take a back seat this year as his son Alrick is now studying. But with the support of his family, including wife Marilyn, and an essay written by his daughter Farren of how proud she is of her dad’s hard work, one can be sure that it is not long now before a PhD will be added to both these teachers’ CVs.