Can missing Toerien millions be found? 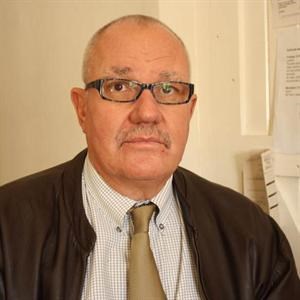 Getting used to life behind bars, shamed broker Michael Toerien of Knysna. The photograph was taken last year when he had just come out of rehab.
GARDEN ROUTE NEWS - Master detective Piet Byleveld has been brought in by one of the complainants in the fraud and theft case of ex-broker, Michael Toerien, to track down the missing millions or hidden assets, in a desperate bid by destitute investors to get something back from their lost funds.

"Where have the millions gone that Toerien took? We still don't know!" is what most, if not all of the exasperated complainants in the Michael Toerien case want to know after he received what they believe is 'too light' a sentence. According to chief investigating officer for the state, Captain RP van der Westhuizen, ex-broker Toerien (58) pleaded guilty on 24 charges of theft and fraud for the misappropriation of his clients' investment monies - the amount of R11 394 549 - for which he was sentenced to 10 years behind bars by district magistrate, Marius Fourie.

Toerien showed up alone and with his bag packed at court in George on Thursday 17 May, knowing full well that he was going to spend a long time behind bars. The court heard that some of the victims had been close personal friends of Toerien and several have been left financially ruined.

The investigation
According to Captain Malcolm Pojie, media spokesperson for SAPS Western Cape: "The complainants alleged that the accused had advised them and solicited money from them with the intention of investing it in Marriott Property Equity Fund and other institutions, but misappropriated the funds for his own lavish lifestyle. He was arrested during June 2011."

Sentence 'too light'
"Most, if not all, of us were dumbfounded by the soft sentence passed," says one of the investors, Dennis Burns of Knysna.
"Most of the investors knew Toerien from his Round Table connections where he was the National President of the KADA Club where he served as Chairman for a while. I met him when he was employed at Simola about 20 years ago. We've been friends since then, fishing together regularly and we've been to each others milestone birthdays."

Burns explains that Toerien was generally a likeable guy and everyone knew he was regi-stered as a broker with the Financial Services Board and was contracted to Mariott. "None of his clients were expecting 'get-rich-quick' returns on investments, just a safe haven for our retirement money. The people he stole from were generally his friends and he knew he was committing them to a life of poverty in their old age!"

The complainants feel that this would usually be considered aggravating circumstances when it comes to sentencing.
Says Burns: "The Defence gave the amount invested as approximately R11-million. Some people invested up to 14 years ago.The equivalent value of the investments, at the ruling price of the Marriott Property Equity Fund as provided by Toerien as at 2011, had this figure at well over R26-million, including dividends, interest etc. In a similar case, the accused, Gervan Lubbe, was sentenced to approximately 43 years for a similar amount only two months ago."

The complainants also feel that since the minimum sentence prescribed by law for fraud and/or theft for the amount R500 000 and more is 15 years incarceration, Toerien should have received a harsher sentence.

Toerien's Port Elizabeth advocate, Alwyn Griebenow pleaded in mitigation of the sentence that Toerien was already in his late fifties and that he was a first time offender. "This is irrelevant as he is younger than 90% of the victims," exclaims Burns. "One of the claimants, who is now financially destitute, is an 86-year-old man who has lost everything. He's been committing this type of fraud for over 15 years, and the only reason it's a first offence, is because he hasn't been caught before!"

Eleanor Contillo, who lost the substantial inheritance she received from her mother, vents her feelings via email: "I trusted Mike because I was a single woman and never

really knew about investments and the monthly statements, as long as I got my income on time, I was happy. The effect of his betrayal was devastating. Money is one thing but the emotional upheaval he caused to many, to destroy my life to the point that I had to move, is unforgivable."

Remorse
Griebenow is adamant that Toerien sincerely regrets his actions. "He wanted to ask forgiveness for what he had done, but due to the pending case he wasn't allowed to make contact with the complainants. When he tried to greet some of his previous clients at court, they just turned away." Snorts Burns: "Not once has he shown any remorse for his heinous crime. He has continued to lie to his family, friends and indeed there are still a few investors/friends who have not filed charges, because Toerien has misled them into believing they will still get their money back!"

Lt Col Theuns Zwiegelaar, commander of the DPCI's Commercial Crime Investigating Unit in George has expressed his satisfaction with the finalising of the case and commended the investigating officer for a job well done. Says Griebenow: "People keep expecting there to be some big revelation as to what happened to the money. It was a simple case of living in Knysna and 'keeping up with the Joneses.' What he earned as a broker was minimal, so that is why he admits to using his clients' money to keep up pretences of a certain lifestyle."

Read more about: Can Byleveld find the missing Toerien millions?