The idea to host the Film Race came from Marius Wannenburg, the managing director of Garden Route Media.

Professional winner: Merchant Films was given "Romance" as their genre. As prop they had to use a glass bottle, and the mandatory line was, "And that's when he shot me". The team are Bryan Wilson, Chris Wilson, Matthew Stemmett and Jessica Jonck.

GARDEN ROUTE NEWS - 48 hours. That was how long contestants in the recent Film Race (25 to 27 September) had to produce their own short film.

Event organiser Cara Botha of Garden Route Media says they were pleasantly surprised with the number of entries.

The concept of the Film Race is simple - teams are given a genre, prop, and character dialogue to conceptualise, write a script, shoot, edit, and deliver a finished film within 48 hours.

The idea to host the Film Race came from Marius Wannenburg, the managing director of Garden Route Media.

"After the hard lockdown, the production industry has been slow to restart," he says. "We have always thought that such a film challenge would be great for the area and figured that if we have the time to host the event, teams will have the time to take part in it."

The Semi Pro Winner was Badger Productions. The team was given the genre "Western". A suitcase was the prop they were given and they had to use the line, “I think I could do cannibalism. If I had to”. From left are Andrew Aveley, Auburn Mihalik, Ayla Berry and Warren Fleming.

The top three films will be screened at the Garden Route International Film Festival on 9 and 10 October in Knysna.

The Garden Route Mall has agreed to screen the top five films of each category at the mall. Dates will be announced on social media. "I remember the first time that I saw one of my films on the big screen," says Wannenburg. "It was probably the single event that inspired me the most to pursue a career in this industry." Six2Six won the amateur category, their genre being "Fantasy". They had to use a coffee mug as prop and use the line "This is why people hate flat Coke.” The winners are Dalene Meyer and Pieter Lombaard.

Garden Route Media says the standard of the entries was much better than they expected and compares well with similar challenges from around the world. The best three entries from each category can be viewed at www.filmrace.co.za from Wednesday 7 October.

The 48-hour Film Race will become an annual event. 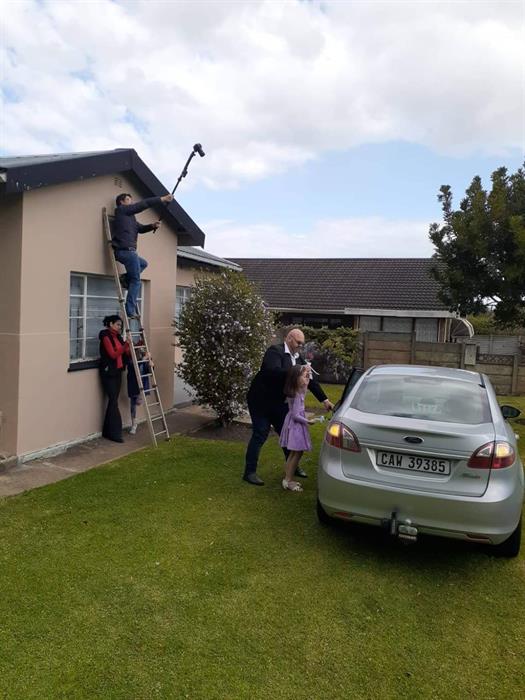 This is the behind-the-scenes photo that earned Van Heerden the first prize. He was given the genre  "Mystery", a light bulb as a prop and had to use the line,"It's not quite true".