3 arrested for fraud at testing station 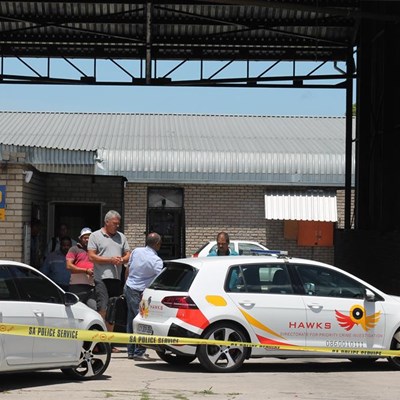 Two of the three suspects (in the short sleeved red and grey shirts) being apprehended by the Hawks at TJ Motor Vehicle Testing Station in George Industria. Photos: Myron Rabinowitz
GEORGE NEWS - On Tuesday morning 13 December, the Directorate for Priority Crime Investigation (Hawks) swooped on the premises of TJ Motor Vehicle Testing Station in Laing Street, George Industria and arrested two males aged 52 and 34 for alleged fraud. Earlier in the day a Tanzanian national was also arrested in connection with the same case in Thembalethu.
The owner of the testing station, Eugene Labuschagne told the George Herald at his testing station that he believes the arrests are linked to a vehicle that was on the premises for a test in December 2015 and January 2016.
He said he would contact his attorney about the arrests.
Labuschagne said the Hawks were at his premises a month or two ago, asking questions regarding a Volkswagen Polo that was tested there in January. "We gave them all the information and they left," he said.
Labuschagne's testing station made headlines five years ago after the station certified the Rheenendal school bus as roadworthy before it plunged into a river on 24 August 2011 killing 14 children and the driver.
Robin Carlisle, the then Western Cape Minister of Transport and Public Works, closed down the testing station shortly after the bus accident, but the station reopened when the Western Cape High Court overturned Carlisle’s decision to close it down.
Last year following an inquest into the causes of the accident, Magistrate Derek Torlage found that there was prima facie evidence that the Western Cape Education Department, TJ testing station that issued a roadworthy certificate for the bus, the bus company owner and the driver had been negligent and that this had contributed to the disaster.
The matter was referred to the Director of Public Prosecutions (DPP) for a decision whether bus company owner Praveen Singh and testing station owner Eugene Labuschagne should be prosecuted, but the DPP decided not to prosecute.
Labuschagne would not comment on the Rheenendal incident.
The George Herald received a tip off about the Hawks' raid on Tuesday morning with the caller saying it was connected to alleged vehicle roadworthy certification fraud.
Captain Malcolm Pojie, Southern Cape police spokesperson said the investigation has been ongoing since December 2015 after a woman purchased a car from a foreign citizen.
The buyer required a roadworthy certificate and looked to the seller to obtain one, who allegedly then obtained a road worthy certificate from TJ Motor Vehicle Testing Station without the vehicle ever being physically evaluated at the station.
At the beginning of 2016, the buyer of the vehicle took it to be evaluated by a second independent station, where it was found that the vehicle was not roadworthy. She then had the vehicle tested for a third time - this time by a municipal official - and it was found that the vehicle had in fact been deregistered (scrapped).
"Upon further investigation it was found that the three arrested were not the only suspects in the case. It is believed that this is not an isolated incident and further investigations will be conducted as we have reason to believe that more people have been conned," said Pojie.
The three men appeared in the George Magistrate court on Wednesday on charges of fraud and possible corruption.
The owner of the testing station, Eugene Labuschagne being interviewed by the SABC.
Read a previous article: 2 arrested for fraud at testing station
ARTICLE: MYRON RABINOWITZ, GEORGE HERALD JOURNALIST
'We bring you the latest George, Garden Route news'