South African Tuition Fees: Can Our Youth Still Make It?

Money shouldn’t have to stop young people in their tracks when it comes to realising their potential.

BUSINESS NEWS - Education has always been the treasure box that children can open to enjoy a world of new opportunities.

Whether it’s getting a job, building wealth sustainably, or networking - we know that knowledge, skills development and learning hold the key to more. And, while nobody can deny the value of this, the irony is that this treasure comes at a cost many can’t afford.

Not so long ago it was me, heading off to University after getting great matric results. It was a new dawn for me really, not because I was going to a top-notch varsity but because I actually passed maths. I was over the moon. After all, going to uni is an exclusive achievement. Not everybody gets in. It’s considered the cream of the educational crop for a reason - right?

But within a year or so of my studies, the dream shattered when I realized how much it costs for an average student to hold a magic scroll saying: “Mission Complete: we’re kicking you out of your nest because we think you’re ready for the working world”. And then at the end of it all I’d get a microscopic disclaimer “but wait, there’s more. As much as we thank you for paying huge amounts of money on a schooling education that never really guaranteed you success, we’ve also set you up for financial hardship”.

Pay up or get left out

It was then a few years later onto my journey of becoming something greater in life that I realized how much tuition fees kill dreams and potential.

And, I mean, these were the only stats we were seeing from reputable institutions. Business Tech (2019) also presented worrying data via Marius Pretorius, Head of Marketing and Income Solutions at Old Mutual Personal Finance. “If your child starts Grade R in 2019 you can expect to pay between R1,400,000 and R3,400,000 for public or private education respectively over their school career which is a rand amount that includes primary schooling, high school and a three year qualification”.

I mean, let’s just think about that for a second. Unemployment is a bitter pill for graduates to swallow but in order to get “job fit”, they need to pay how much? It’s not realistic. And also, we’re working on the assumption that university is the only way to get a job.

Questioning what we know

Remember #FeesMustFall? It was a highly publicized, student-lead movement, in 2015, aimed at fighting the increase in fees. Students, faced with impossible financial burdens, wanted the South African government to increase its funding in universities. According to Groundup (2015) in the period of years 2012/2013 the government contributed over R24 billion in total funding to universities which amounts to 2.3% of total spending, about 0.76% of GDP. And, according to Roshuma Phungo of the South African Institute of Race Relations, this is a low rate (globally) and should have been 2.5% or above. This started new conversations about the way forward for education and society in South Africa.

In fact, let’s look at some of the comparative fees from some of SA’s top universities, according to Business Tech. 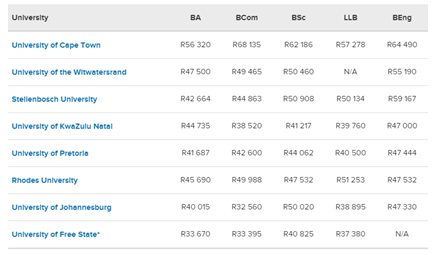 And then, more worrying news via government statistics:

It’s not to say that the education system is failing, but rather that it’s neglected by those in power. As you might have witnessed with the few statistics we’ve seen, accessing tertiary education is virtually impossible, financially speaking, if you fall under the poverty line - or even as a member of the middle class.

As youth and parents of an overwhelmingly frustrating environment, do we then host violent marches? Burn down concrete buildings? Sway the middle finger at the sight of a BMW driven by? I don’t have all the answers, but I do know one thing for certain: change begins in our ability to realize the impact we can have for the generations to come.

I want us to acknowledge that tertiary tuition is unaffordable for most and while we work on changing that, there are viable options for our youth. Money shouldn’t have to stop young people in their tracks when it comes to realising their potential.

This is why I’m an entrepreneur activist. The numbers don’t lie and they’re showing us that we need to harness opportunities to give future business leaders a fighting chance.

In South Africa and other emerging economies. Those chances lie in entrepreneurship and training that doesn’t cost the Earth. And, the more ways we can find to nurture talent within this framework, the more we’ll create a world where our youth don’t end up suffering, unemployed or straddling the poverty line.

Leon Lategan is The Entrepreneur Activist. He is the Founder & CEO of the School of Entrepreneurship where accomplished entrepreneurs set students up with the necessary knowledge, tools and skills needed to start an income-generating business within a year through their Entrepreneurship Mastery Programme, which is a more practical and affordable alternative to tertiary education. Reserve your spot to attend a free Taking a ‘Gap Year With Purpose' webinar and learn how the programme sets matriculants up for success in life and business.